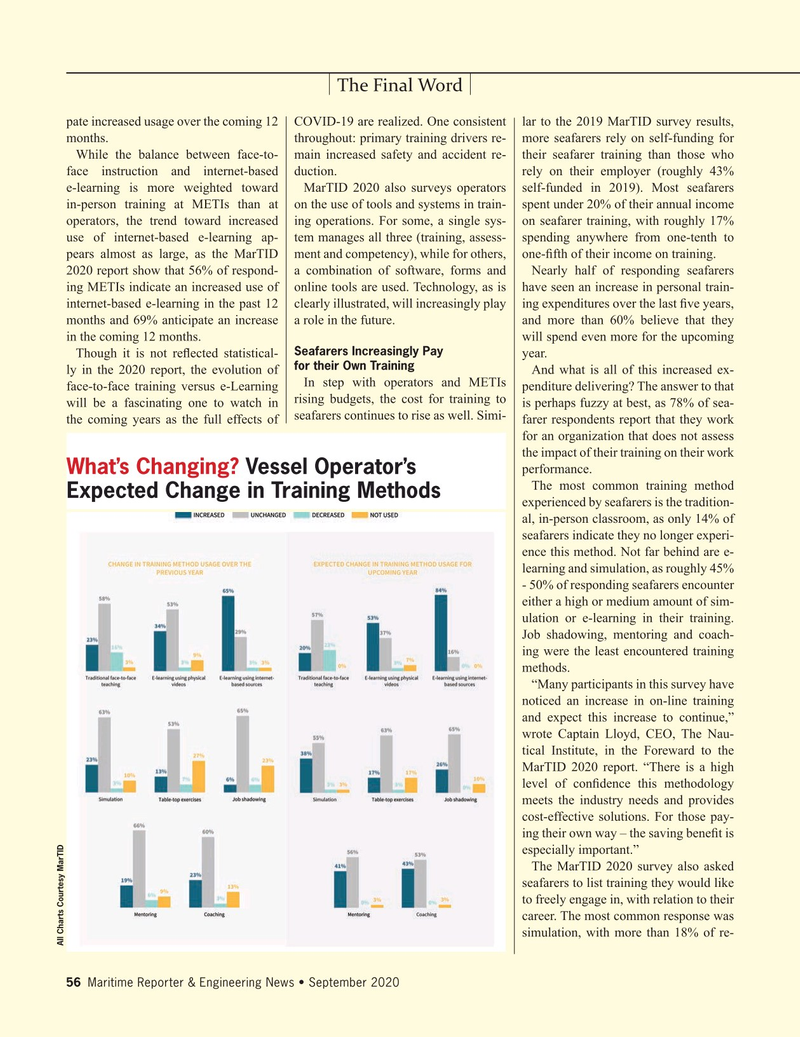 The Final Word pate increased usage over the coming 12 COVID-19 are realized. One consistent lar to the 2019 MarTID survey results, months. throughout: primary training drivers re- more seafarers rely on self-funding for

While the balance between face-to- main increased safety and accident re- their seafarer training than those who face instruction and internet-based duction. rely on their employer (roughly 43% e-learning is more weighted toward MarTID 2020 also surveys operators self-funded in 2019). Most seafarers in-person training at METIs than at on the use of tools and systems in train- spent under 20% of their annual income operators, the trend toward increased ing operations. For some, a single sys- on seafarer training, with roughly 17% use of internet-based e-learning ap- tem manages all three (training, assess- spending anywhere from one-tenth to pears almost as large, as the MarTID ment and competency), while for others, one-? fth of their income on training.

2020 report show that 56% of respond- a combination of software, forms and Nearly half of responding seafarers ing METIs indicate an increased use of online tools are used. Technology, as is have seen an increase in personal train- internet-based e-learning in the past 12 clearly illustrated, will increasingly play ing expenditures over the last ? ve years, months and 69% anticipate an increase a role in the future. and more than 60% believe that they in the coming 12 months. will spend even more for the upcoming

Though it is not re? ected statistical- year.

for their Own Training ly in the 2020 report, the evolution of And what is all of this increased ex- face-to-face training versus e-Learning In step with operators and METIs penditure delivering? The answer to that will be a fascinating one to watch in rising budgets, the cost for training to is perhaps fuzzy at best, as 78% of sea- the coming years as the full effects of seafarers continues to rise as well. Simi- farer respondents report that they work for an organization that does not assess the impact of their training on their work performance.

The most common training method

Expected Change in Training Methods experienced by seafarers is the tradition- al, in-person classroom, as only 14% of seafarers indicate they no longer experi- ence this method. Not far behind are e- learning and simulation, as roughly 45% - 50% of responding seafarers encounter either a high or medium amount of sim- ulation or e-learning in their training.

Job shadowing, mentoring and coach- ing were the least encountered training methods. “Many participants in this survey have noticed an increase in on-line training and expect this increase to continue,” wrote Captain Lloyd, CEO, The Nau- tical Institute, in the Foreward to the

MarTID 2020 report. “There is a high level of con? dence this methodology meets the industry needs and provides cost-effective solutions. For those pay- ing their own way – the saving bene? t is especially important.”

The MarTID 2020 survey also asked seafarers to list training they would like to freely engage in, with relation to their career. The most common response was simulation, with more than 18% of re-