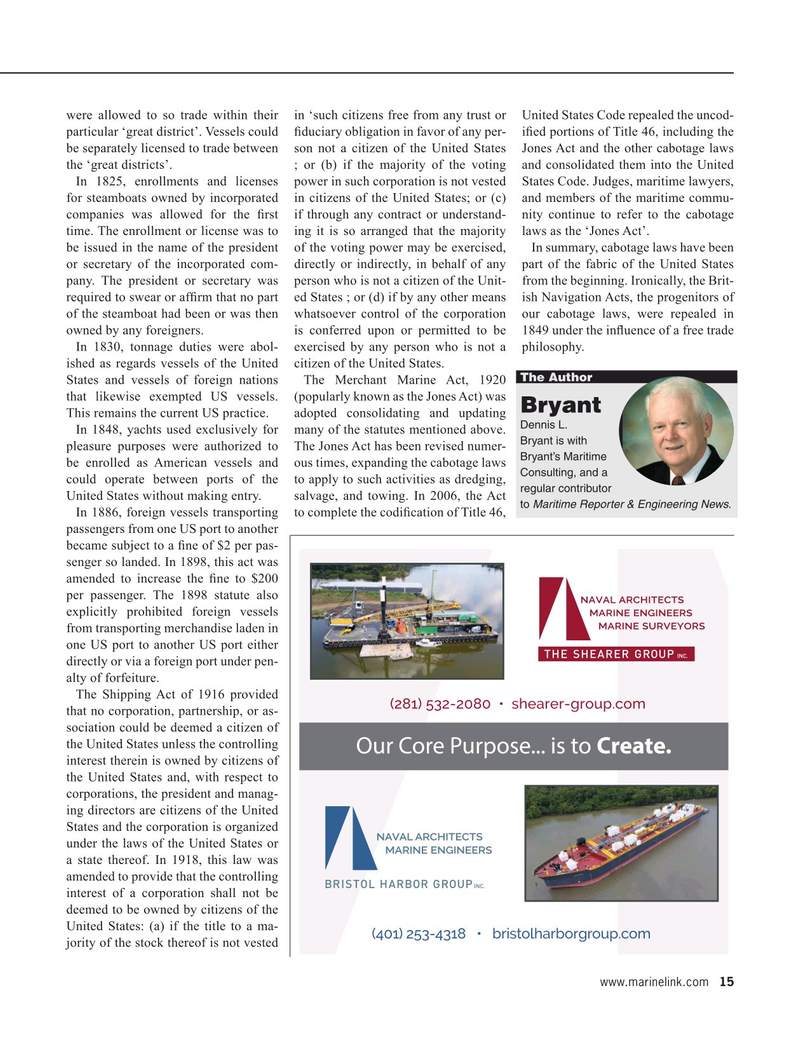 were allowed to so trade within their in ‘such citizens free from any trust or United States Code repealed the uncod- particular ‘great district’. Vessels could ? duciary obligation in favor of any per- i? ed portions of Title 46, including the be separately licensed to trade between son not a citizen of the United States Jones Act and the other cabotage laws the ‘great districts’. ; or (b) if the majority of the voting and consolidated them into the United

In 1825, enrollments and licenses power in such corporation is not vested States Code. Judges, maritime lawyers, for steamboats owned by incorporated in citizens of the United States; or (c) and members of the maritime commu- companies was allowed for the ? rst if through any contract or understand- nity continue to refer to the cabotage time. The enrollment or license was to ing it is so arranged that the majority laws as the ‘Jones Act’. be issued in the name of the president of the voting power may be exercised, In summary, cabotage laws have been or secretary of the incorporated com- directly or indirectly, in behalf of any part of the fabric of the United States pany. The president or secretary was person who is not a citizen of the Unit- from the beginning. Ironically, the Brit- required to swear or af? rm that no part ed States ; or (d) if by any other means ish Navigation Acts, the progenitors of of the steamboat had been or was then whatsoever control of the corporation our cabotage laws, were repealed in owned by any foreigners. is conferred upon or permitted to be 1849 under the in? uence of a free trade

In 1830, tonnage duties were abol- exercised by any person who is not a philosophy. ished as regards vessels of the United citizen of the United States.

States and vessels of foreign nations The Merchant Marine Act, 1920 that likewise exempted US vessels. (popularly known as the Jones Act) was

This remains the current US practice. adopted consolidating and updating

In 1848, yachts used exclusively for many of the statutes mentioned above.

Consulting, and a could operate between ports of the to apply to such activities as dredging, regular contributor

United States without making entry. salvage, and towing. In 2006, the Act to Maritime Reporter & Engineering News.

from transporting merchandise laden in one US port to another US port either directly or via a foreign port under pen- alty of forfeiture.

The Shipping Act of 1916 provided (281šA??-??í?ÎŸEå±uåu-guoup.cNj that no corporation, partnership, or as- sociation could be deemed a citizen of the United States unless the controlling

Our Core Purpose... is to Create.

a state thereof. In 1918, this law was amended to provide that the controlling interest of a corporation shall not be deemed to be owned by citizens of the

United States: (a) if the title to a ma- (401š?A?-c?OíÎbuGŸtolE±uboucuoup.coj jority of the stock thereof is not vested www.marinelink.com 15