Ship owners increasingly face complex investment decisions as they try to navigate the most efficient course to the low-carbon future. Ever since the IMO set the industry’s ambitious emission-reduction targets for 2030 and 2050, owners have been inundated with information about future fuels and technologies that may, or may not, ultimately lower the carbon footprints of their fleet.

Some of the new technologies hold promise, but the day-to-day viability of too many of them remains unproven; the same can be said for many of the potential fuels. For both, maturity timelines vary as widely as the prospective solutions. Yet, it is in these uncertain times that some owners now find themselves facing long-term investment decisions for new ships.

However, decisions may be less complex than they seem. The spectrum of available fuel solutions is wide, but in examining each onboard technology – engines, fuel supply systems, storage, containment, etc., – taxonomies arise that can be used to simplify decision making.
Once categorized, all enabling technologies (including fuels) need to be assessed for maturity (readiness for market) and carbon-reducing potential in the short, medium and longer terms.

Effectively, there are three fuel pathways to 2030 and beyond: The LNG, or ‘light gas’ pathway; the LPG/methanol (or alcohol) ‘heavy gas’ pathway; or the ‘bio/¬synthetic fuel’ pathway. None of these are mutually exclusive.

Perhaps most importantly, choosing the right technology should be predominantly influenced by two key criteria: (i) the type of vessel and (ii) its operating profile, i.e., where and what it will trade.

The ‘light gas’ family includes, LNG (liquid methane) and bio-methane (in bio-LNG and bio-natural gas [BNG] forms); production of the latter family needs to be scaled up and technologies developed before it becomes a viable commercial fuel.

For LNG and BNG, reducing the methane slip is critical to their commercial potential as future fuels, which is why the industry is actively trying to develop a range of related emissions control technologies. Without them, using LNG as a fuel could, in some cases, actually increase the CO2 output from shipping, relative to heavy fuel oil or marine gas oil (HFO, MGO).

From a tank-to-wake perspective – LNG consumption within the vessel –high-pressure diesel cycle engines already operate with negligible or no methane slip. And there are technologies in development and in the early stages of testing – methane slip filters, catalytic converters, etc., – that ultimately could minimize carbon output across the full LNG-production chain.

Given its relatively limited CO2-reducing potential in its present state, it would be easy – and incorrect -- to see LNG as just a contributor on the pathway to meeting the 2030 emissions-reduction goals. Its potential may be greater than that, given time.

If bio-methane or electro-methane (see electro/synthetic section below) fuels prove viable on a commercial scale in the medium term, then LNG’s present carbon output could be further reduced proportionate to the fuel blend. BNG or electro-methane fuels are potentially carbon neutral and there is currently significant industry investment dedicated to exploring these solutions.

From a timescale perspective, at the end of the Light Gas pathway is hydrogen, which needs at least a decade to prove viable as a commercial marine fuel; and that is probably ambitious. There are a lot of technical obstacles in the way, the biggest being storage. Further research also is needed to confirm the most effective way to utilize hydrogen for marine propulsion: fuel cells and gas turbines are potential solutions, but they are a long way from operational viability, or cost-effectiveness.

Although hydrogen is the furthest of the light-gas family from viability, it holds significant promise. It might have the lowest energy density (energy per volume) but has by far the highest energy content (energy per weight); one unit would deliver three times the energy of an equal volume of LNG or HFO. It could be a zero-carbon marine fuel, but a significant number of technological advancements are needed to make it a practical solution.

The Heavy Gas pathway
Generally, these fuels consist of heavy, more complex molecules and a lower comparative energy content than the light-gas family, and their fuel supply and storage conditions are less demanding.

Heavy gas fuels include liquid petroleum gas (LPG), methanol (and ethanol, as part of the alcohol family), bio-methanol and, ultimately, ammonia. Used as a fuel, methanol in its present form reduces CO2 output by around 10%; if they become available on a commercial scale, bio-methanol and electro-methanol could be carbon neutral.

Because some of these fuels have a very low energy content, they may only be suited for limited types of vessels, trades and routes; the ability to make multiple fuel stops on a ship’s typical trading loop may be necessary. The exception is LPG, the use of which has not matured as rapidly as LNG, in part because it has less potential to reduce emissions, and faces different safety challenges.

In terms of maturity, like LNG, LPG and methanol are already part of the current techno-logy mix; their bio-derivatives are medium-term considerations as shipping waits for the technologies to mature and for the fuels to be produced at scale.

Ammonia-fueled engines are not currently available and would require another 3 to 4 years for the first one to be delivered. The first movers might come from the Ammonia carrier community. Ammonia is potentially a zero-carbon fuel, if renewable energy is used during production, which adds cost. Its potential has seen recent designs unveiled for ammonia-fueled feeder ships.

However, comprehensive supply-side infrastructure needs to be built for the fuel to be commercially viable – and new, stringent safety regulations implemented – so, practical use is best only to be considered in the longer term.

The Bio/Synthetic pathway:
These are fuels that are produced through bio-derived raw materials and sources. In principle, in liquid form, their consistency is very close to diesel oil, which could minimize the number of new onboard technologies that would need to be developed for their use, as well as any changes to current ship designs.

Currently, the most widely used is biodiesel, or FAME (Fatty Acid Methyl Esters), which is part of the latest ISO (8217/2017) specification for marine fuel blends and is being offered by all of the oil majors. The standard allows for 7% biodiesel in the fuel blend, but some shipowners are testing richer blends, from 20-100%.

Because their production has an impact on the environment (limiting their potential to reduce lifecycle emissions) and they compete for food crops, this first generation of biofuels is controversial

Another proposed biofuel is HVO (hydro-treated vegetable oil), which has a high-energy content, similar to MGO. HVO can be produced in existing refineries where the hydro-treatment takes place. The final product is a significantly stable fuel with very good properties and low risk of oxidization.
The bio/synthetic family of fuels includes gas-to-liquid, or GTL, varieties, produced either through carbon capture and electrolysis, or conversion of the syngas that is produced from biomas into liquid fuels, such as methanol or diesel.

These fuels are mid-to-long-term options for shipowners. However, because they could be ‘plug-and-play’ solutions (drop-in biofuels) that would minimize capital expenditures, electro-synthetic fuels are being actively explored by major national and sector-focused shipping organizations.
In the long term, 2nd- and 3rd-generation biofuels (e.g., from waste biomass, lingocellulose [woody plant fibers] or algae) also have the potential to provide international shipping with fuel volumes that exceed its current annual requirements.

Future-proofing ship-designs:
With the maturity timelines for many mid- and long-term solutions currently very fluid, a way to future-proof the design of new ships is to introduce more electrical components, such as electric drives and/or propulsion. If an owner opts for an electric drive, the generation of the onboard electricity becomes fuel agnostic; it can be from fuel cells, batteries – or any combination – or an engine being run on LNG, or methanol, for example.

When/if a component needs to be upgraded at a later date, it already has an electric drive installed. This is the way the most advanced shipowners and charters are looking at the future.

That way, when/if the propulsion system becomes outdated, it does not have to be wholly replaced; the engine can be updated to burn another fuel. Or, if fuel cell technologies advance enough over the next 20 years, they can replace the engines, if it makes economic sense.

Granted, current electric propulsion systems have some challenges to overcome, but owners would still be well counselled to start introducing electrical installations into their designs: power output or input; minimize the diesel generators; optimize generator and prime-mover loads; and make the whole design more efficient. In doing so, owners would take another small step towards minimizing the carbon-footprint of their fleet. 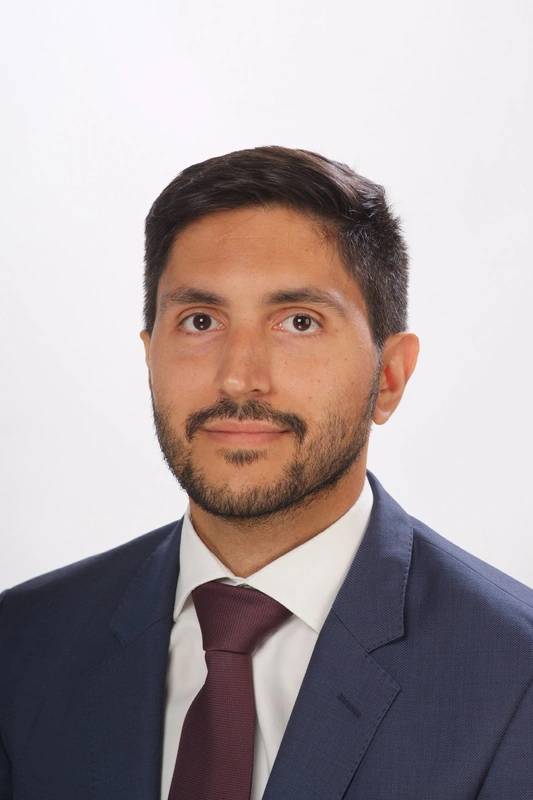 Georgios Plevrakis is the Global Sustainability Director at the American Bureau of Shipping. 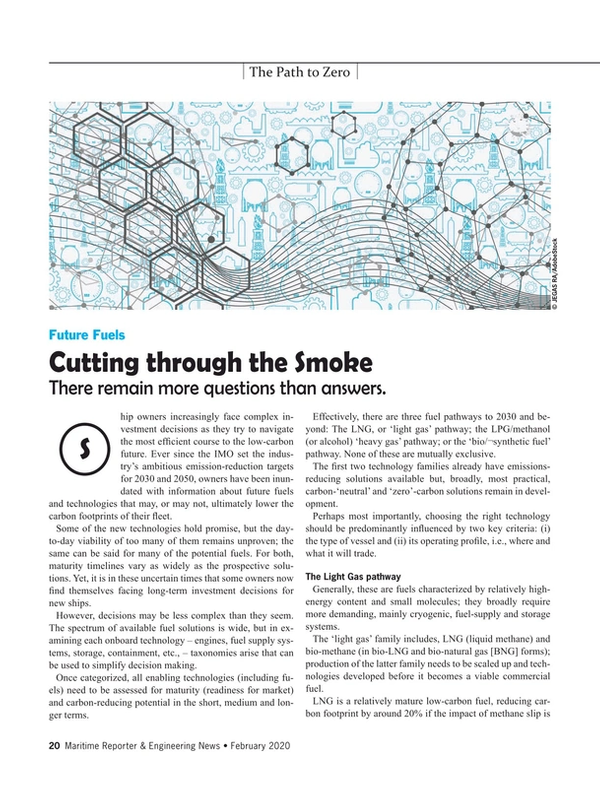