Ammonia, the same pungent solution used in fertilizers and cleaning agents, may one day be the key to transporting renewable energy around the world. There are currently a number of government and corporate projects assessing the feasibility of converting excess renewable energy from sources like wind, solar, tidal and nuclear into ammonia and then back into usable energy.

In its purist form, ammonia or NH3 is composed of one nitrogen and three hydrogen atoms making it an ideal candidate to chemically bind excess renewable energy. Like several other chemical compounds, ammonia can be transported by chemical tanker in liquid form to end-users. Based on its near ambient liquification point, it may be more appealing to transport ammonia over longer distances than hydrogen. Once unloaded, ammonia can be converted back into usable energy and heat with fuel cells, gas turbines, or combustion engines.

In a push to become a carbon neutral society, countries like Norway are considering projects which would demonstrate this concept on a large scale. To determine its technical and economic feasibility, a study was conducted to determine if excess wind energy produced in Finnmark, the most northern county in mainland Norway, could be converted to either compress hydrogen or ammonia and delivered to the isolated island of Svalbard. These projects are examples of a potential new norm in transporting renewable across the globe via vessel. To shed some additional light on the topic, this article explores the Svalbard project in Norway and considers how the maritime industry could play an important role in this growing energy market. 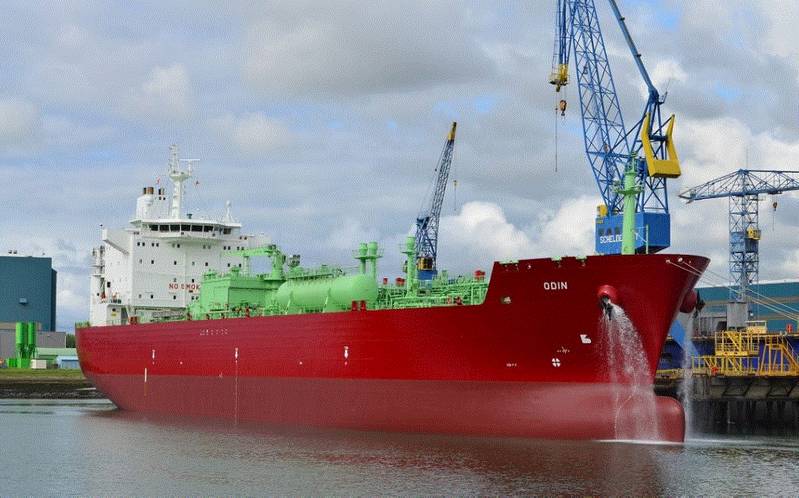 LPG vessel Clipper Odin. Photo credit Solvang ASA.The Svalbard Case Study
Although still assessing different power production technologies, if the Norwegian government decides to move forward with supplying ammonia to Svalbard it will mark the first large-scale project to provide a community heat and electricity via ammonia. The conversation to consider ammonia as an energy carrier between Finnmark and Svalbard first began with the decision to close Svalbard’s legacy coal-fired power plant in 2016. According to current estimates by Statkraft, one of the major corporate partners assisting the Norwegian government, current coal reserves will only last until 2025. After that point, coal will either need to be shipped into the island via bulk carrier or a new combined heat and power plant will be established.

Approximately 800 kilometers away in Norway’s austere northern mainland, Statkraft recently secured licenses to further develop two large wind farms called the Raggivudda and Hamnefjell fields in Finnmark. With the mantle of being “one of the most efficient wind power plants in Norway”, Statkraft is eager to develop additional capacity in the area to take advantage of ideal conditions for wind power generation. One challenge that Statkraft must overcome, however, is that the wind farms are isolated from the national electrical grid in Norway. This prevents the owners of the wind farm, Varanger Kraft, from selling excess energy to the rest of Norway and abroad. It is from these two interesting problem sets that renewable energy experts began considering ammonia as a method of transporting energy from production site to customers.

To solve these logistical issues and potentially generate additional business opportunities across multiple industrial sectors, Statkraft and a number of well know research and chemical companies went about assessing alternatives. Summarized in a translated report titled “Renewable Energy Supply to Svalbard – Longyearbyen”, Statkraft explores different carbon neutral technologies which could transport the renewable energy created in Finnmark to the island of Svalbard.

As a starting point, the feasibility study considers the following requirements and assumption to service the community in Svalbard. The first assumption is that Statkraft will be able to scale up wind production in the Finnmark region to achieve an installed electrical capacity of between 40 and 50 MW. This installed capacity will be used to generate roughly 3800 tonnes of hydrogen annually for transportation to Svalbard by 2025. As an end-user, Longyearbyen which is the main city in Svalbard requires 40 Giga-watt hours (GW-hrs) of electricity and 70 GW-hrs of heat annually. Based on this requirement, Svalbard would require an installed production capacity of 12 MW of electrical power and 15 MW of heat power. Additionally, given the critical dependence of the inhabitants of Svalbard on fuel transportation, the proposed solutions must be able to supply a 30 days heat and electricity buffer. 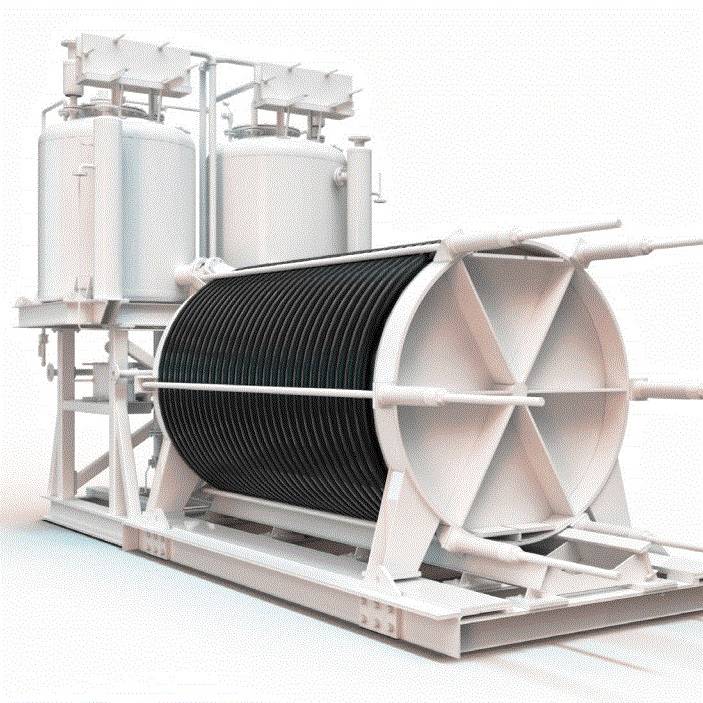 Methods of Renewable Hydrogen Transport
To move “stranded” renewable energy from Finnmark to end users in Svalbard, Statkraft analyzed four alternatives mediums to transport the energy. These mediums, or “energy vectors”, included compressed hydrogen, liquid hydrogen, hydrogen bound in methanol and hydrogen bound in ammonia. In order to narrow down these possibilities, Statkraft considered the total cost of ownership over 25 years. After thorough analysis, Statkraft concluded compressed hydrogen and hydrogen bound in ammonia had the lowest total cost of ownership and meets all requirements.
Critical to all four of the proposed solutions is the electrolysis process. During electrolysis, electrical current is passed through water which is split into hydrogen and oxygen. The idea is that excess wind energy from the wind farms in Finnmark would be sent through an electrolyzer to create hydrogen, and then hydrogen would be used as a feedstock for the four considered alternatives.

One alterative is that hydrogen can be compressed using a gas compressor and stored in special purpose pressurized containers and shipped to Svalbard directly. Statkraft proposed compressing pure hydrogen to 350 bar and storing the gas in International Standards Organization (ISO) tanks which would be loaded into TEUs and transported on traditional container vessels. High level calculations reveal that 4600 container loads would be required to achieve the 3800 tonnes of required hydrogen to provide the annual required heat and electricity to Svalbard.

Another method for transporting hydrogen is to cool the substance down to -253 degrees Celsius and transport it as a bulk cryogen liquid in a similar manner to Liquefied Natural Gas (LNG).  As detailed in an earlier article from Maritime Report, a number of maritime companies including Moss Maritime, Wilhelmsen, and Kawasaki Heavy Industries are currently considering innovative method of transporting bulk liquid hydrogen. Statkraft’s report concludes the liquid hydrogen option would have the highest total cost of ownership compared to other options considered.

The third method of transporting hydrogen discussed in Statkraft’s feasibility study is by further processing the substance to form methanol. One of the major benefits of methanol is that it shares many of the same qualities with petroleum products like diesel and gasoline that can easily be transported by the existing fleet of chemical tankers. Unfortunately, the report ruled out this method of transport citing a lack of major carbon sources located in close proximity to be used as a feedstock to produce methanol.

The final method suggested by Statkraft to transport wind energy from Finnmark to Svalbard is to combine hydrogen with nitrogen found in the air to form ammonia. Using a technique known as the Haber-Bosch synthesis process, hydrogen and nitrogen from air are heated and compressed to form ammonia. Alternatively, a reversible fuel cell may be used directly to produce ammonia.

Unlike hydrogen in its pure form, which exists as a gas at atmospheric temperature and pressure, ammonia can be stored and maintained as a liquid using substantially less energy to liquefy the substance than hydrogen.  Noting that 26,500 tonnes of ammonia would be required annually to meet Svalbard’s heat and power demands, Statkraft estimates that an ammonia LPG carrier would be required to transport ammonia either once or twice a year.

After considering both the technical feasibility and costs associated with these non-traditional forms of energy transport, the Statkraft feasibility study concluded that compressed hydrogen and ammonia appeared to be the two leading possibilities for the Svalbard case study. 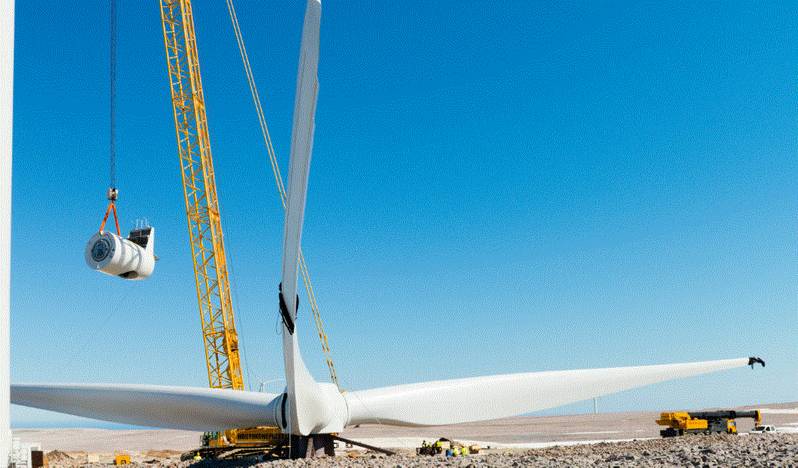 Turbine installation at the Raggividda wind farms in the northern county of Finnmark in Norway. Photo credit Bjarne Riesto.Transporting Ammonia
Similar to other products used in the petro-chemical industry, ammonia has been transported by vessels for decades. Liquefied Petroleum Gas (LPG) carriers appear to be the most popular method of transporting bulk ammonia over long distances. These vessels maintain their cargo in liquid form by using either fully-refrigerated, semi-refrigerated, or fully pressurized tanks.

In order to keep the ammonia in liquid form, the substance is generally stored onboard LPG carriers in self-supporting prismatic tanks which have a working temperature of at least negative 50 degrees Celsius. LPG carriers usually transport between 15,000 and 85,000 cubic meters of ammonia, with the most common sizes being 30, 52, and 80 thousand cubic meters by volume. Utilizing some of the same design principles as liquefied natural gas (LNG) carriers, LPG carriers have a primary and secondary barrier to ensure that the stored ammonia is contained if there is a failure of either the refrigeration system or the primary barrier.

In the context of the Svalbard case study and many other “green” ammonia projects throughout the world, ammonia is attractive for its relatively large energy density and lower energy input required to maintain the substance in liquid form. Ammonia may be stored as a chilled liquid at - 34 degrees Celsius at standard atmospheric pressure or at normal ambient temperatures at pressures around 10 bar. When compared with liquid hydrogen, ammonia has nearly double the energy density by volume and requires less energy and insulation to maintain the substance in liquid form while it’s being transported by vessel from source to end-user.

One of the main drawbacks of ammonia, however, is its high degree of toxicity. According to the US Department of Labor’s Occupational Safety and Health Administration (OSHA), “ammonia is considered a high health hazard because it is corrosive to the skin, eyes, and lungs”. Additionally, when mixed with air ammonia could become flammable at a 15 to 28 percent concentration by volume. Traditionally, ammonia feed stock for fertilizer operations is transported as “anhydrous ammonia” meaning that it can rapidly absorb into water and form strong alkaline solutions like ammonium hydroxide which is also highly toxic in high concentrations. To ensure public and crew safety, vessels carrying ammonia need to comply with the International Code for the Construction and Equipment of Ships Carrying Liquefied Gases in Bulk (IGC Code) produced by the IMO.
Interestingly, there are also a number of maritime engineering projects assessing the feasibility of using ammonia as a marine fuel. Examples of major projects include, the feasibility study being conducted by C-Job, a naval architecture firm in the Netherlands, and the announcement by MAN ES, a global supplier of marine engines and energy systems, to initiate a multi-million dollar research and development program to develop an ammonia two-stroke engine. In a perfect world, research efforts in the maritime and utility sectors may culminate to form an entirely new logistics supply chain where “green” ammonia is transported to a LPG vessel during bunkering and then a portion of the substance is used as marine fuel while transporting the product to customers.

Regardless of the outcome of each individual project, it is clear based on the number and timing of various ammonia projects throughout the world that ammonia will likely become more common in ports and waterways. Based on these developments, both stakeholders in the utility industry and maritime industry should consider following developments closely to determine under what conditions these arrangement could be profitable. 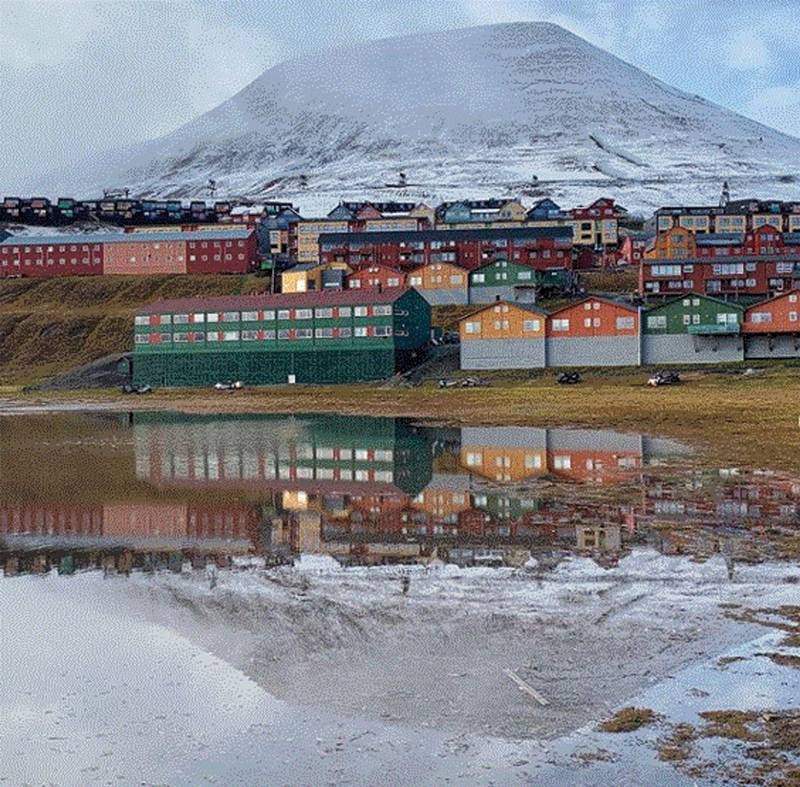 Longyearbyen is the largest town in Svalbard and may become one of the first large scale consumers of green hydrogen or ammonia produced from wind farms in Finnmark. Photo credit Visit Svalbard.

As published in the September 2019 edition of Maritime Reporter & Engineering News. 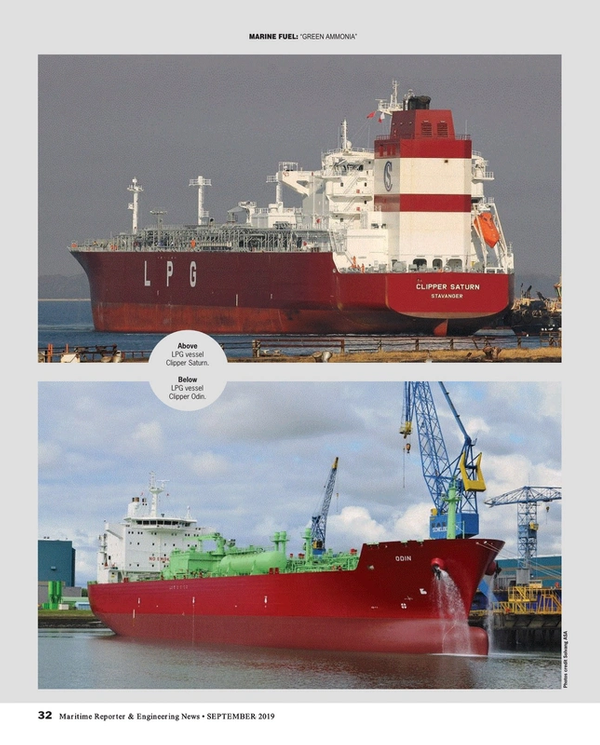