German Shipbuilding: A Strong Vessel in a Heavy Sea

While orders for new vessels have continued to decline worldwide in 2017, the situation in the German and European shipbuilding market is different, with an increase of incoming orders. As shipping experts state: “…this is not a trend but a snapshot, but it indicates a high competitiveness of the German shipbuilding industry, particularly on technologically advanced projects.”

The global mood barometer of the maritime industry had reached its lowest point in 2016. From the abyss confidence and order have carefully increased, and with about 13.5 million CGT ordered in the first three quarters, the value has passed the entire previous year.

Despite the decided uptick, this order volume is far away from full production capacity. As the global orderbook shrinks further, for a number of large Asian shipyards this could be an acid test for the upcoming year. Two important points become clear:

In step with the growing German shipbuilding orderbook is a continuation of the maritime energy revolution. The German orderbook for natural gas powered vessels, including for the first time also governmental vessels, exceeds 10 billion Euro and is probably the largest level of investment for clean shipping worldwide.

The German Federal Government has now adopted a LNG funding program, whereas to date the program addressed mainly ship owners.

The past year saw lots of movements also in naval shipbuilding. Important partnerships were established and new orders from home and abroad have been agreed. As maritime hotspots and flashpoints of conflict continue to increase globally, the high performance of the local naval shipbuilding industry is a valuable and strategic asset.

Deliveries & Orders
It is little secret that, as the shipbuilding orderbook volume for tankers, bulkers and containerships have slipped to yards in the Far East, vessel which are more technically advanced and demanding have remained the province– and dominate the orderbooks – of German shipyards. The majority of the ordered or under production vessels are cruise liners, river cruise ships as well as governmental and naval boats. An additional segment which is currently showing a very positive trend is the ferry and RoRo sectors, which can be seen in the latest orders for new ships of Flensburger Schiffbau-Gesellschaft (FSG).

The orderbook of Meyer Werft is currently filled up to 2023 (six delivered in 2017, 26 on order, including up to now seven new buildings which will run on natural gas). Such a long-term perspective in the existing highly competitive shipbuilding market is not self-evident and requires a permanent high adaptability and further development of the yard.

Rostock based Neptun Werft with a staff of around 550 employees are experts at delivering modules that contain the complete engine room, the LNG storage tanks as well as all systems and equipment.

Within the project “green cruising concept” they are among the first cruise vessels which will use 100 percent natural gas as fuel and are therefore particularly environmentally friendly.

AIDAnova
At 337m long, 42m wide with a 8.6m draft, with four main engines transferring 62 MW to two pods, The AIDAnova is the biggest AIDA Cruises new building, currently under construction at the Meyer Werft, scheduled to be delivered in late 2018. It also sports a 3,550 cu. m. liquefied natural gas (methane) storage capacity in three storage tanks, with the storage tanks developed in-house and built by Neptun Werft. The tanks are located in a 120 x 42 m x four deck high module. Two tanks feature a length of almost 35m and a diameter of around 8m with a volume capacity of 1,500 cu. m. each. An additional tank features a length of 28m and a diameter of 5m with a volume capacity of 550 cu. m.

Another module being built at Neptun-Werft contains the four dual-fuel engines from Caterpillar in Rostock. The dimensions of the Floating Engine Room Units (FERU) are 120 x 42 m x three decks high.

Fassmer Werft
Fassmer is a dynamic family-owned shipyard in its fifth generation. The internationally successful company is active in six business areas: Shipbuilding, Boats and Davits, Deck Equipment, Wind Power, Composite Technology and the company service activities which operate under the name of Fassmer Service. Fassmer’s orderbook features seven vessels delivered in 2017 and eight on order.

Research and development, design, construction and production are included in the shipbuilding department. The coastal tourism vessel Helgoland was the first German new build which operates on natural gas.

In December 2017 the keel laying of the research vessel ATAIR took place. It was ordered by Bundesamt für Seeschifffahrt und Hydrographie (Federal Maritime and Hydrographic Agency). This new building is the first seagoing government vessel which uses natural gas as fuel. The new ATAIR replaces a 30-year-old vessel, and the new ship will be commissioned in 2020. She will be the biggest vessel in the BSH fleet, measuring 75 x 17m with a 5m draft and a maximum speed of around 13 knots. The new vessel offers room for 18 crew and 15 scientists.

The next-generation passenger ferries will replace the company’s current Spirit of Tasmania vessels by the year 2021. Mike Grainger, TT-Line Chairman, said the companies would now commence contract negotiations and agree to final design specifications. “FSG was endorsed by the board after the company shortlisted a number of international shipyards to build the new tailor-made vessels,” he said. “As previously announced, we expect to place an order for the new vessels in the first half of the 2018 calendar year and for them to be delivered in time to commence operations on Bass Strait in 2021.” Built in Finland in 1998, Spirit of Tasmania I and Spirit of Tasmania II operate sailings across Bass Strait between Melbourne and Devonport on Tasmania’s north coast.

Irish Continental Group plc (ICG) has entered into an agreement, with the German company Flensburger Schiffbau-Gesellschaft & Co.KG (FSG), whereby FSG has agreed to build a cruise ferry for ICG at a contract price of €165.2 million. Upon completion, it will be the largest cruise ferry in the world in terms of vehicle capacity. The cruise ferry will accommodate 1,800 passengers and crew, with capacity for 5,610 freight lane meters, which provides the capability to carry 330 freight units per sailing. Overall, it will effectively be a 50% increase in peak freight capacity compared to the MV Ulysses.

MV Werften
MV-Werften are the heart of the maritime industry in Mecklen-burg-Vorpommern. In April 2016 Genting HK bought shipbuilding capacity from Nordic Yards the Wismar, Rostock and Stralsund located yards. This is a special situation: Genting is client, contractor and ship owner, all in one. It was initially planned to do the ship production under the name of the group subsidiary Lloyd Werft. But in July 2016 the company announced to run the three yards under name MV Werften, with Wismar selected as headquarters.

January 2017 started the first steel cut at the Stralsund location for the production of the luxurious expedition yacht Crystal Endeavor for Crystal Cruises. MV Werften’s orderbook includes four delivered and nine on order.

“Because of the early concentration to build specialized vessels, such as particularly environmentally RoRo ferries which run on natural gas and highly innovative offshore oil and gas vessels out of Flensburg towards unique megayachts in Rendsburg, Kiel and Wewelsfleth our yards are not that much affected like the containership industry,” said Dr. Bernd Buchholz, Economics Minister of Schleswig-Holstein.

Kiel based yard TKMS (Thyssen Krupp Marine Systems) builds submarines for Egypt – the second of four ordered subs has been delivered last summer – the last two shall be delivered in 2021. The orderbook looks impressive: one sub delivered and 17 on order.

Kiel based German Naval Yards (two delivered, two on order) received a small portion of the order volume to build five ships for the German Navy. The majority of the 1.5 billion worth order for five corvettes was awarded to Lürssen (Bremen) and TKMS (Kiel).

German Naval Yards repairs continuously navy ships, e.g. the, at the ship’s stern, damaged Frankfurt Am Main, which got off the course in Wilhelmshaven - resulted in considerable damages at the stern which affected also the propulsion and the steering gear.

Peters-Werft in Wewelsfleth specializes in special shipbuilding and yachts – till 2020 the yard will be busy to recondition the four-masted barque Peking.

The world largest sail yacht A has been designed by Rendsburger Nobiskrug-Werft and produced at German Naval Yards in Kiel. If the futuristic seeming vessel for both the companies involved are a stroke of luck, must be open – numerous negative headlines about unpaid invoices and probable illegal used tropical wood went around the world.

Only in Mecklenburg-Vorpommern and Niedersachsen employees are searched in big numbers. In all other German shipyard locations the workforce is smaller. This is the result of the yearly questionnaire answered by the workers’ council on behalf of the labor union IG Metall. According to them 15,800 employees are working at 37 German shipyards – as was the case in previous years since 2013.

“The German shipbuilding industry maintains its position in the heavy seas of the worldwide shipbuilding. But it cannot escape the negative influence of the world market,” says Thorsten Ludwig of the Struktur- and Personalentwicklung (AgS) agency who is the author of the study. In Mecklenburg-Vorpommern alone are about 2450 people busy in the large yards. The most of them at the three locations Rostock, Wismar and Stralsund (1.454), at the Peene-Werft in Wolgast about 300 and the Neptun-Werft in Rostock features around 550 employees. 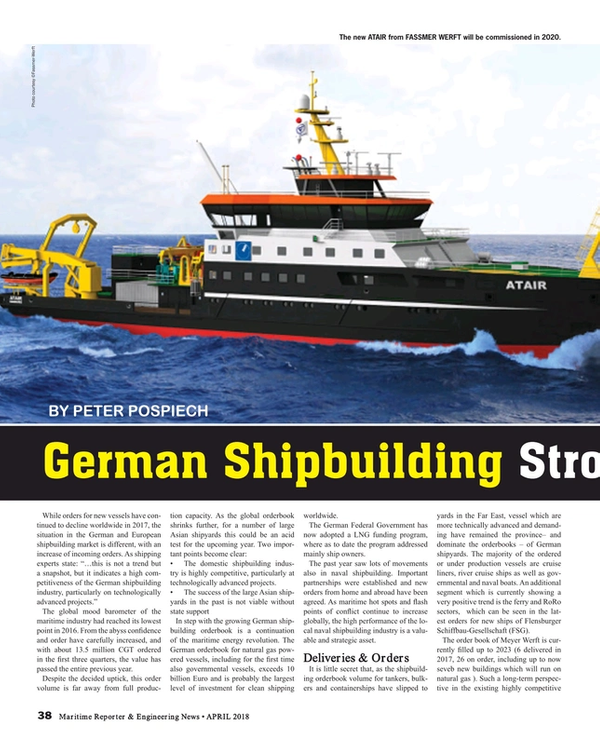 Read German Shipbuilding: A Strong Vessel in a Heavy Sea in Pdf, Flash or Html5 edition of April 2018 Maritime Reporter