US Shipbuilding: The Road Ahead

Matt Paxton, president of the Shipbuilder’s Council of America, shares with Maritime Reporter & Engineering News his insights on the opportunities and challenges ahead.

The United States shipbuilding market is diverse and geographically widespread, tasked to build everything from the most sophisticated military warships on the planet to small ferries, and everything in between. As president of SCA since 2007, Matt Paxton has made it job one to make SCA a unifying voice for the collective industry, a champion of the industry in raising its profile and stature in political and business circles. “Having that singular voice is good for the industry, as it helps us to work more effectively here in Washington, D.C., and it helps us to build up in all four quadrants of the shipbuilding industrial base, which is: commercial shipbuilding, commercial ship repair; government/navy shipbuilding and government/navy ship repair,” said Paxton. “Many of our shipyards are diverse, and appear in all four of those quadrants.” With that, Paxton gives his insights on what is hot, what is not, and what will drive the U.S. shipbuilding and repair market further faster in the coming years.
What is the ‘state of the industry’?
I think it depends on where you sit, but to start there is tremendous excitement with the prospects of meeting the challenge of building a 355 ship navy. We also see excitement growing regarding the business to build Arctic icebreakers (for the U.S. Coast Guard), a project which will have a huge ripple effect throughout our industry, as these are complex vessels. (On the commercial side), in the Pacific northwest  and offshore Alaska you are seeing a big recapitalization of the fishing fleet. These are big, complex vessels, a real success story, and there is more to come. We are now delivering our first offshore wind vessel. We would like to see that segment grow, but we are realistic about the price of energy right now. Offshore wind is a potential market, and long-term it is encouraging.
Speaking of energy, the depressed pricing for energy is well into its third year. It has impacted a number of traditional offshore players. How do you see the energy markets?
The price of oil has impacted a large segment of our industry. We answered the bell when the price of oil was skyrocketing and there was a need to build tankers quickly for that market. Shipyards were able to reconfigure themselves quickly, and that experience helped to show the level of innovation at shipyards in the United States to ramp up.
Looking ahead, please discuss the SCA Agenda.
If you are sitting on that navy side of things, it is essential that we end Sequestration, which is something we have been advocating since day one. Once that happens, then we have to get creative on building up this Navy fleet. We have to be serious about alternative funding approaches to shipbuilding. We have to have multi-buy, multi-block contracts to spread out the cost of these vessels. This is going to require a creative acquisition strategy.
On the commercial side, number one is the promotion and protection of the Jones Act. The commercial shipbuilding sector in the U.S. really doesn’t ask for much. The Jones Act is critical to maintaining this industrial base (and it’s not just the shipyards, as) we (SCA) have more than 100 partner members, members that are critical to the shipbuilding supply chain. The Jones Act is the number one priority to maintain that industrial base. We continue to look at our workforce development too, which is arguably our single biggest challenge.
We need a strong workforce to build both naval and commercial order books. For example, to ramp up to the 355 ship navy will require another 20,000 direct employees to carry out the work, and that doesn’t include another 30,000 being employed throughout the entire supply chain and industrial base.
With the new Administration came new hope for the industrial base. How has that panned out so far?
When the Trump Administration came in with the heavy focus on “Buy America” and a focus on shipbuilding, from this Administration there have been a lot of positive signals. Now we need to see them follow through on those positive signals; we need to see the execution of the policy.
Bottom line, is the much-discussed ‘355-ship’ navy going to be a reality?
I would say that the Administration’s 2018 budget is not there yet. With the initial budget proposal we are not seeing all of the trends that we would like to see, but it is moving in the right direction.  As I said before, we really need to see multi-ship orders, because that is when the shipyards can really plan forward and make the investments necessary to ramp up.
Another big project is the rebuilding of the U.S. Coast Guard icebreaker fleet. You mentioned it briefly, but can you update our readers on the status?
All we know is the DHS mission ‘need statement for the icebreaker which reads: “there is current requirement and future projection that indicates the U.S. Coast Guard will need to expand its icebreaker capacity potentially to a fleet of six icebreakers, three heavy and three medium.” I read that to you because that’s where the excitement is … one is great, six would be better. We should build six. Russia is ramping up its icebreaker fleet, and we really don’t have an icebreaker fleet right now.
(As published in the October 2017 edition of Maritime Reporter & Engineering News) 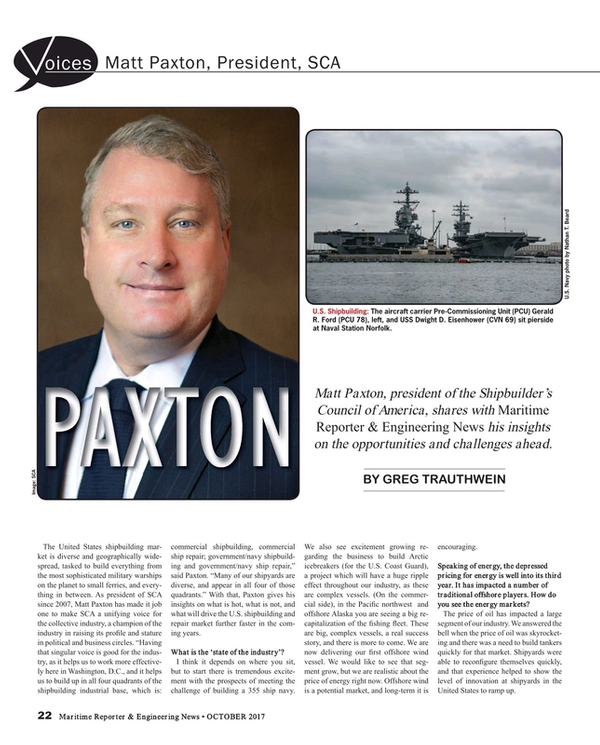 Read US Shipbuilding: The Road Ahead in Pdf, Flash or Html5 edition of October 2017 Maritime Reporter

Other stories from October 2017 issue