When Esa Jokioinen and his Rolls-Royce Blue Ocean Team look at future technology trajectory, he admits that there are some things related to energy storage (batteries), new fuel and exhaust cleaning that hold promise. But he is adamant that there is not a bigger ‘disruptive’ technology trend than digitalization.
“We have a new ship intelligence business unit at Rolls-Royce that addressed three different things: Health Management Solutions (of the ship including equipment, systems and the ship itself); Optimization and Decision Support; and Autonomous and Remote Operations.”
A driver for increased digitalization onboard ships is akin to land-based trends: the proliferation of better, cheaper connectivity. But the benefit is cost savings and operational efficiencies, too.
“Today I think the cost of connectivity for vessels is about 0.5 to 1.0% of total ship operation costs,” said Jokioinen. With increasing demand for connectivity, prices will come down but overall the cost per ship should nudge above that 1% threshold as increasing numbers of products and systems get connected.
While it can be expected that overall connectivity costs per vessel and fleet will rise with increased usage, Jokioinen shares the belief that the benefits and cost avoidance that comes as a result will dwarf any additional costs. “We know that this is a cost-conscious business, and no one is swimming in money, particularly now,” said Jokioinen. The current economy in the maritime sector likely means that the evolution will mean a multi-year ramp up, but Jokioinen said that in 10 years, connectivity on every vessel will be significantly different than today.
Lessons Learned
The marine industry often looks to the global aviation market as a standard-setter of sorts, in terms of commonality of equipment and efficiency throughout the logistic chain. In evaluating the evolution of digitalization in the maritime sector, Jokioinen and his team are taking cues from all transport sectors.
“There are many parallels to be found,” particularly if you look at what is happening in the road vehicle market and the evolution of trucking toward autonomous convoy operations in the next 15 years. “They are working to drastically cut the cost of transportation on wheels,” which could result in a modal shift to more cargo on the road. Taking it a step further, Jokioinen reasons that to be truly effective you must consider the entire logistics chain.
“We want to understand how digitalization affects the entire ecosystem of shipping, and in fact the entire logistics chain. We think that when you combine all of the data together, that will yield the biggest efficiency gains (and cost savings).” A truly transcendent effect of digitalization in the maritime sector could hit directly home with one of the long-held traits of the industry, which is best characterized by a majority of vessels held by smaller operators with smaller fleets. As the efficiencies of digitalization are magnified by tremendous investment and gains in efficiency by the world’s largest companies, smaller outfits will be required to transform or perish. “There might be an incentive for smaller ship owners to establish a digital alliance, a digital marketplace, an ‘Uber of the Seas’ if you will,” said Jokioinen. He said that while a shipowner’s operational data is traditionally closely held and proprietary, opening up to the new digital reality could open many new efficiency gains as well.
Ship Design
Changes in operations are not the only ones facing the maritime sector, as the evolution toward digitalization will open new possibilities for autonomous and remote operations, changing with it some of the common features on commercial boats and ships. “I see more opportunities than challenges,” said Jokioinen. There is an opportunity when you take away all human support systems, for example, as it simplifies the design and creates more space for cargo. In addition there will be opportunities to optimize the hull and the placement of machinery, as many of the current rules are premised on human occupation of certain spaces and the safety and comfort of the crew.
Challenges of unmanned ships start with reliability of machinery, as there obviously is no one onboard to fix even simple problems. More reliable or redundant machinery will add costs. Another potential challenge lies outside of the realm of Rolls-Royce Marine, of for that matter any single product/system supplier, in that seamless digital integration will rely on common standards for digital connectivity.
Despite the myriad of bridges to cross, Jokioinen and his colleagues are secure in the continuation of the digitalization trend and its overwhelmingly positive impact on efficiency and cost. “I think on some smaller vessels, short sea shipping, you will see demonstrators by the end of the decade.” 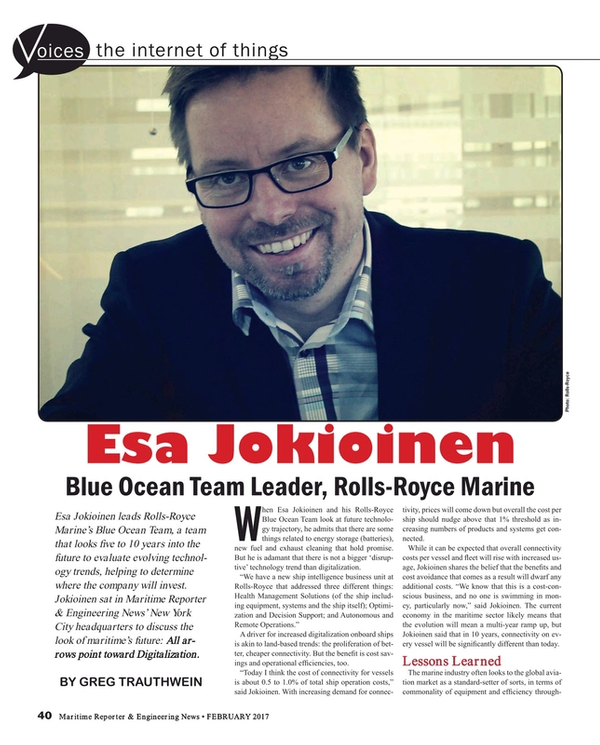 Other stories from February 2017 issue