Safe Cruising Down Under with Australian Reef Pilots

By Kathy A. Smith

According to the Australian Reef Pilots (ARP), Australia is now the fourth biggest cruise market in the world. Part of the boom in cruising has to do with more specialty cruise ships coming to the region. The smaller size cruise ship segment seems purpose-designed to transit the remote waters of the Kimberley coast. However, larger-vessel cruise companies are now expressing interest in touring this remote and rugged north-west region as well as the Great Barrier Reef. In fact, the number of cruise ships using ARP’s services has increased by more than 89 percent since 2010.

Last year, ARP saw record demand for pilots between Broome and Darwin, and expects 2016-17 will see the Kimberley coast enter the mainstream market.

In Northern Australia’s Great Barrier Reef, the draft limit in the Inner Route – the passage that lies between the mainland and the outer reef between Cairns and Cape York – is 12.2 meters (40 feet). The maximum size of cruise ships that normally transit the area is approximately 265 meters (869 feet), which carry about 2,100 passengers. So passages like the Torres Strait can only be plied at certain times and at restricted speeds to control squat. “It’s also necessary to pay careful attention during course alterations to minimize heel, and of course, for the comfort of passengers,” says Captain Ian Perry, ARP Pilot and Pilot Trainer.

Captain Perry is one of 44 highly experienced ARP marine pilots who regularly shepherd vessels through the shipping channels of the Great Barrier Reef Marine Park. One of the most environmentally-sensitive regions in the world, the Reef is heritage-listed, and ARP are known as the unofficial Guardians of the Reef. In addition to offering pilotage through the Great North East Channel, Hydrographers Passage, the Inner Route, Torres Strait, Whitsunday Passage, Cape Flattery and 2 Mile Opening as well as other special cruise ship corridors, ARP also provides advisory services through non-mandated pilotage areas.

“Many of those areas outside of our compulsory pilotage areas are quite navigationally demanding with strong tidal streams, currents, and especially in the Kimberleys, which have a huge range of tides to 13 meters,” explains Capt. Perry. “We offer this specialized knowledge of cruising grounds around Australia, not just the Barrier Reef. Some current surveys and charts are based on information that goes back to the 19th century, so additional information we can supply to the ship is important for these off-the-beaten-track places.”

ARP has implemented a very robust and modern Pilotage Operations Safety Management System (POSMS), which was officially approved by the Australian Maritime Safety Authority in October 2014. A group of ARP pilots and management worked alongside well known and respected marine safety expert Captain Ravi Nijjer to research more than a century of accident reports from the Reef, as well as marine incidents from around the globe in order to put together a safety management system relevant to ARP operations.

The POSMS has since been augmented by a training framework which outlines how it is introduced and taught to new and existing pilots. This makes ARP the first pilotage company in Australia to have a fully integrated on-the-job training framework for its safety management system. Training involves on board real-life experiences with a licenced pilot and mentor pilots, as well as time with bridge simulators. The course is only for ARP pilots and is based on their procedures and systems.

A continual assessment of the POSMS ensures that the latest information is always relayed to every ARP pilot. Additional ongoing training that pilots must undertake includes courses such as a one-week advanced pilot training course, a one-day helicopter underwater escape training (taken every four years), and a four-day bridge resource management course. The Torres Strait and Great Barrier Reef simulation program developed by ARP and Smartship Brisbane (an Australian simulation center) helps fine-tune the POSMS in the challenging conditions pilots face when passing through the Prince of Wales Channel in the Torres Strait.
“We also attend advanced marine pilot training courses to develop skills and broaden experiences,” says Capt. Perry. “Those are done with pilots outside of the Reef pilotage of ARP such as port pilots and other marine experts. It’s a great opportunity to feed on other people’s knowledge and for general improvement.”

The two principal tenets of POSMS are error management and dynamic risk. The one-day training is typically given to groups of four or five pilots. “From that point on, you learn to use it [POSMS] and refer to it. It was written by pilots. It wasn’t imported from elsewhere,” said Capt. Perry.

Reef pilots can be challenged by myriad issues like sea conditions, extreme weather changes, tides, etc. Naturally they have to have a very good understanding of the rules and regulations that apply specifically to cruise ships as well as other vessels such as the landing of passengers in case of emergency, arranging port access, and the like.
Regulations are very strict when it comes to the discharge of gray water in Reef areas. All ships must carry a permit and pre-plan where to make an exit and re-enter the Reef, and ARP pilots help execute these additional legs, plan the logistics and suggest appropriate places.

Settling in on board quickly is crucial to a pilot’s effectiveness, especially since the cruise ship must stay on schedule. And, of course, all aspects of the voyage must be pre-planned and covered well before the pilot gets on board.

“Becoming an accepted member of a ship’s command team, being in a position to assist with a variety of things that do not normally arise in other shipping pilotage jobs, and mastering a great array of equipment can be challenging. We need to be familiar with many things.”

Also considering the 500 miles of the Inner Route (the passage can be anywhere from 24 to 50 hours pilotage, depending on the ship’s speed) with its series of short passages interspersed with more intensive pilotage sections, managing rest is essential for pilots. A fatigue management plan is also part of the POSMS. “It’s essential to manage rest during the passage sections so you’re rested for the pilotage sections,” said Capt. Perry. “If you can’t manage your sleep, I don’t know if you can do this job.”

As a group, ARP is continually in a process of identifying hazard, assessing risk, taking action to eliminate or reduce risk and monitoring and reviewing the constantly changing circumstances. This is a key difference in comparison to port pilotage, as the ARP work in a much more time-extended environment.

“The challenges are still coming to grips with the role of the modern day pilot in terms of error management, particularly following what we’ve learned about the Costa Concordia accident,” he told Maritime Reporter. “Cruise lines are committed to non-compulsory pilotage because they understand the additional assurance that it provides. It is part of their and our due diligence.”

According to Capt. Perry, a number of pilotage organizations are copying or taking pieces of the POSMS program on board, for example at ports around Australia, including Fremantle, Cairns and Port Philip and elsewhere worldwide. ARP has also won several awards in the past few years and has been recognized by the Transport & Logistics Industry Skills Council (TLISC), with the 2015 Innovation and Excellence in Workforce Development Award in the maritime Sector for the competency-based training of its Pilot Boat Launch Crew.

“Our goal is to provide highly competent pilotage practices and have a depth of current local knowledge that can provide first-class systems to all ships, and of course cruise ships and their particular industry requirements,” said Capt. Perry.

In total, ARP operates a fleet of six pilot launches and five land-on helicopters as well as pilothouses located in Mackay, Cairns and Thursday and Yorke Islands in Torres Strait. In addition, the group also provides Great Barrier Reef relief Masters, port pilots in Australia and New Zealand, towage specialists, marine surveys, and provision of charts, voyage management, launch operation and hire. “You might consider that at one time, a pilot’s role in life was to protect a ship from the environment.” says Capt. Perry. “Some pilots feel that we are now there to protect the environment from the ship. And I am certainly of that second school of thought.”

ARP have been guarding the Great Barrier Reef for more than 125 years. The group has certainly seen changes over the decades in operational improvements and modern innovations, but some things never change. “The technical advances make life so easy,” Capt. Perry sums up. “But you still have to look out the window.”

(As published in the February 2016 edition of Maritime Reporter & Engineering News - http://magazines.marinelink.com/Magazines/MaritimeReporter) 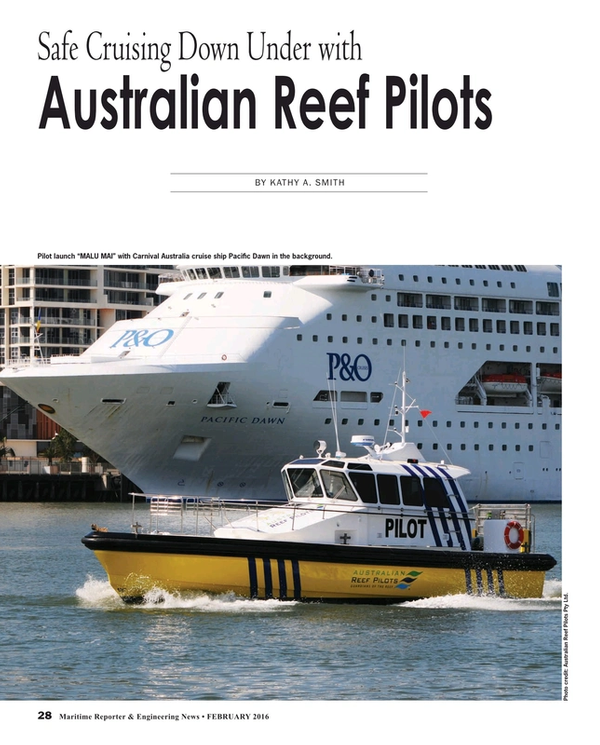 Read Safe Cruising Down Under with Australian Reef Pilots in Pdf, Flash or Html5 edition of February 2016 Maritime Reporter