The New York Times once called Venice “undoubtedly the most beautiful city built by man.” But as beautiful as Venice might be, it is still a port city struggling to compete in a global economy, and beauty doesn’t attract Ultra Large Container Vessels (UCLV). Port of Venice authorities hope that its ambitious new offshore-onshore port project might do just that.
The Venice Offshore Onshore Port System (VOOPS) was born out of necessity. The Venetian government made it a goal to remove all oil tanker traffic from the Venice Lagoon in the eighties and last year the city banned cruise ships (although a court overturned the ban earlier this year). Venice exists in a lagoon, a lagoon the city has in interest in protecting, both for environmental reasons and for self-preservation. Venice is literally sinking at the same time that water levels are rising. The city is constructing an integrated system of mobile gates capable of separating the lagoon from the Adriatic, a system known as the MoSe project.
Construction began in 2003 and was originally scheduled to be completed in 2012. After a series of controversies, including the arrest of the city’s mayor on corruption charges associated with the project, MoSe is now scheduled to be operational in 2016. Isolating the city from the ocean might be the way to save the city from rising tides and increasingly tempestuous weather, but it would hardly help the local economy and the Port of Venice.

VOOPS 2020
Venice Port Authority and the Venice Water Authority have adopted plans to not only move oil tanker traffic out of the lagoon, but expand the port’s container ship capacity and revitalize the entire North Adriatic as a gateway to central European markets in the process. The VOOPS might not just change the Port of Venice when it begins operations in 2020, it could also serve as a model for ports worldwide struggling with accommodating massive container ships, protecting local environments, and maintaining port security.
Part of the MoSe project was the construction of a lock at the Malamocco inlet that was compatible with an offshore port. The advent of 16,000 to 18,000 TEU container vessels led authorities to realize that they could effectively kill two birds with one stone: expand the port’s capacity and eliminate tanker traffic in the lagoon. They could accomplish this by building an offshore port capable of handling both oil shipments and the berthing of ULCVs. The project was formally presented to the International Maritime Organization in June by Paolo Costa, President of the Venice Port Authority, Dimitris Pachakis from Royal Haskoning, and Jim Knott from BMT Triton in London. Construction is set to begin in 2016.
The project is essentially two subprojects: one is the construction of an energy terminal, the other a container terminal. Both will be protected by the same 4.2km long breakwater and will be built eight nautical miles offshore where the ocean depth is 20 meters. The container terminal will eventually be able to accommodate three ULCVs simultaneously. (Currently, the Port of Venice has 12m sea beds only capable of handling vessels of up to 7,000 TEUs in size).
Building two terminals eight miles into the ocean is certainly its own technical challenge, but it is the method that Royal Haskoning DHV devised to transport cargo containers that makes the project truly innovative.
Venice Port Authority calls the system a continuous conveyor belt, one that will transfer cargo from the offshore terminal to Porto Marghera and Porto Chioggia, which are inside the Venice Lagoon, as well as Porto Levante and inland river ports. The first part of the system is the container terminal, which will have a berth length of 1000 meters and a berth depth of 20 meters (a size large enough to ensure that even if the explosion in container vessel size continues, the Port of Venice will still be able to accommodate the world’s largest ships).

“Mama” Knows Best
The terminal is projected to move 1 to 1.3 million TEUs per year when operational. This terminal will use automated straddle carriers working with remotely operated STS and barge cranes to load and unload containers onto barges capable of holding 384 TEUs. These class-v barges will then be loaded onto semi-submersible vessels, dubbed “Mama vessels,” designed by BMT Triton.
Watching an animation of the Mama vessels in action makes it clear how they got their name: two barges move inside the Mama vessels and the Mamas, pregnant with the barges floating inside of them, then travel at a rate of 12 knots, generating a wave of less than .5 meters, which will help to ensure safer Lagoon navigation. (For a look at the video, visit: https://www.youtube.com/watch?v=QNeGfeq9D3M&list=UUY29bF0T-h4lFhitYvYVYIg&index=15)
The Mama ships will feature three Schottel azimuthing thrusters for maneuverability, and the ballasting operation to allow the docking of barges will take only 15 minutes to complete. The barges are then capable of inland navigation once they arrive on shore.

Economic Impact
The VOOPS project, which will have a 2.1 billion euro basis cost for an international tender, will be fully operational by 2023. But the economic benefits to the region will start long before that. Pricewaterhouse Cooper estimates that the construction phase alone will create 943 jobs and impact the local economy to the tune of 703 million euros. The operation of the system will create 1,925 jobs by 2025. Venice also already has a large and underused rail infrastructure that is capable of accommodating expanded cargo volumes. The project will also convert disused areas of Porto Marghera, which will be the first land terminal to receive containers in the VOOPS system, to port industrial and logistical uses. Port Marghera is located in the Montesyndial area, a section of disused industrial areas that were once operated by Montefibre and Syndial. This area was purchased by the Port Authority in 2010 and has since been part of an ongoing reclamation project. Currently 32 hectares out of 90 are available for port and industrial use.
The benefits of Venice’s offshore port project will extend far beyond Venice. The project is part of a larger effort to revitalize the Northern Adriatic. Look at a map and draw a straight line from the Suez Canal the heart of Europe and you’ll notice that Venice, and the Northern Adriatic, are the first thing you hit on the European mainland. The European Union has recently invested three million euro into studying the Northern Adriatic as part of its Trans-European Transport Network (Ten-T) program. The opportunities are there, but the infrastructure, as of now, is not.
The overall throughput of all NAPA (Northern Adriatic Ports Association) ports was 1.8 million TEU last year, or about 110 million tons, which is only a quarter of Rotterdam’s throughput. NAPA has set a goal of increasing its throughput to 6 million TEUs by 2030, and while the VOOPS project is the star of that effort, NAPA ports like Trieste, Rijeka, and Koper are planning, or have already started, major port infrastructure projects.
It’s possible that the biggest impact VOOPS makes isn’t just in Venice, or the Northern Adriatic, but on how governments think about ports and their relationships to cities. The advantages of offshore ports in a variety of areas, including environmental, volume and security, have long been recognized. Cargill launched an offshore port off the coast of Jamnagar, India in 1998 and Abu Dhabi opened its Khalifa Port, an artificial island, in 2012. But VOOPS might be the model for the offshore ports of the future. The project was shortlisted for the 2014 OECD International Transport Forum’s “Innovation in Transport Award” and received a special mention for its “replicability around the world.”
That replication might happen soon. Experts have cited the U.S. and Africa as key markets that would be best served by offshore ports. The U.S. government is investigating offshore port concepts through its Portinus project at the Lawrence Livermore National Laboratory (LLNL). And Bechtel said earlier this year that it is in discussions with U.S. government agencies about the development of an offshore port on the East Coast. 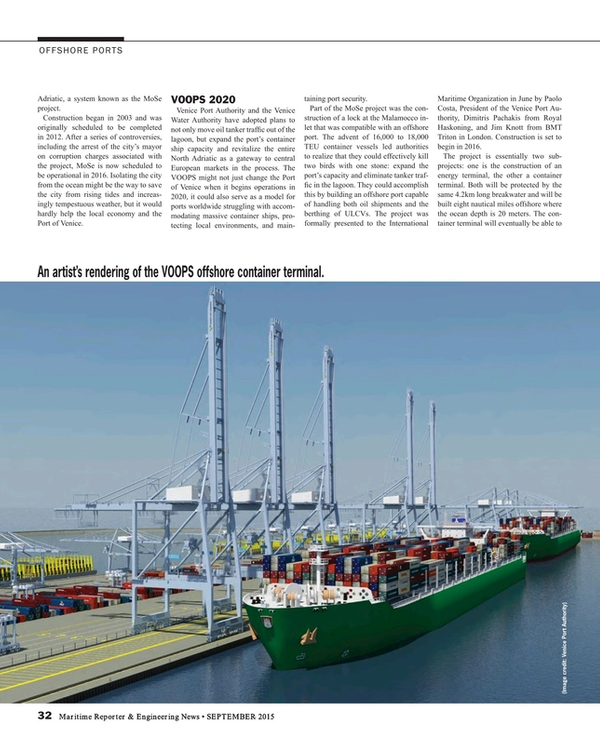