When the Dockwise Vanguard was conceived, Dockwise, part of the Boskalis Group, had a vision for a new market - transporting the world’s largest cargoes, including FPSOs (floating production storage and offloading vessels).

It hasn’t taken the vessel, the largest heavy transport vessel in the world, long to prove its worth, as well as the feasibility of such a feat. The vessel has currently transported its first ship-shaped FPSO cargo, Bumi Armada’s Armada Intrepid, to South East Asia which also happens to be one of the three largest cargoes ever transported.  It is a ground-breaking job for a vessel which had only just completed the transportation of ENI Norge’s 107m-diameter, 64,000-tonne, Goliat Sevan-design cylindrical floating production and storage unit from Hyundai Heavy Industry’s yard in South Korea to Hammerfest in Norway.
What’s more, the 110,000-ton capacity Dockwise Vanguard’s next major job will be yet again bigger in size and weight - Total’s 85,000-ton, 250m-long, 60m-wide Moho Nord floating production unit (FPU), which will be transported from Hyundai Heavy Industry’s yard in Ulsan, South Korea, to West Africa early 2016.
All three projects are noteworthy achievements, but transporting the FPSO is the biggest, proving the ship-shaped FPSO transport concept. Being able to transport FPSOs using a heavy transport vessel offers FPSO operators and owners a faster and safer alternative to the current industry norm - slower wet tows using tugs.
“This is opening a new market,” says Hans Leerdam, category manager – strategic vessels, Offshore Energy Division of Boskalis. “We have just complete transporting the heaviest cargo (Goliat), and now the Armada Intrepid, the first ship-shaped cargo. Next, we will be getting ready for Moho Nord FPU. To have these three contracts in a row shows why we brought the Dockwise Vanguard to the market.”

Safe Loading
The Armada Intrepid, previously known as the Schiehallion FPSO while it was working for BP, west of the Shetland Islands, was safely and successfully loaded on to the Dockwise Vanguard in Rotterdam’s Caland Canal on May 8, just eight days after the heavy transport vessel’s arrival in port. The job, loading and transporting the Armada Intrepid, posed the Dockwise project team some interesting and unique challenges, due to the dimensions of the cargo. Terpstra says: “The configuration of the loading marks this out from other projects. At first sight, it looks like a normal transport, but what’s quite novel is that it was the first ship-shaped FPSO we are transporting on the Dockwise Vanguard. Weighing 60,000-tonne (42,000-tonne plus ballast), it is among the top three heaviest cargoes ever transported. That, in combination with its ship-shape, with a 245m-long, 45m-beam hull, makes the this project quite interesting.”
Unlike normal loads, which are positioned on the Dockwise Vanguard’s 275m x 70m deck by ballasting the vessel beneath the water line and floating the load across its beam, the Armada Intrepid, which is too long to float across the beam, had to be floated over the deck via the Dockwise Vanguard’s stern, carefully slotting between the two aft casings, with just 2.5-3m leeway either side.
Removing one of the aft casings could have been an option, like we will do to load the Moho Nord FPU, but, due to the time and cost to do this, and the ability to take the Armada Intrepid through the stern in this case, the team went for the latter option, saysTaco Terpstra, senior project manager for the Armada Intrepid, Boskalis. This loading configuration meant more handling (tugger and tow lines) was required compared to normal jobs, due to the careful maneuvering required. Getting the water depth and tidal window right it key, making loading location and timing crucial.
“We had to wait for the right high-tide and the right environmental conditions,” says Terpstra. “The wind needed to be less than 15 knots, or Beaufort scale 4. Crucially, the water depth needs to be sufficient for long enough.”
In Rotterdam, the tide ebbs and flows every 12 hours, with high-tide, at this time of year, providing water deep enough – at 24m - for 5-5.5 hours to carry out the operation.
On May 8, the right weather window was identified and the action started early in the morning. The Armada Intrepid was taken from its dry dock by four tugs to the Caland Canal and, by 11am, it was in position, ready for the high tide.
The pressure was on. The team had a big job on their hands and some 1000 spectators as well as local and national media watching. But, they also had ideal conditions – sunny weather and little wind.
“A few hours before we had the right water depth, we ballasted the vessel (Dockwise Vanguard) so it had a free board of 1m,” says Terpstra. “We then waited for the final go-ahead.” With the go-ahead given, the team continued to ballast the Dockwise Vanguard while the four harbor tugs brought the FPSO to its stern. At 4:30 pm, the float-on operation started, with the first tugger lines (from the Dockwise Vanguard to the Armada Intrepid) slowly pulling the vessel in between the two aft casings. It’s a slow and careful process, with the Dockwise Vanguard crew taking over the handling for the final positioning on to guide posts on the heavy transport vessel’s deck.
By 7:30 pm, she was in place. However, even once in place, the position had to be monitored, to make sure it was correct, before the Dockwise Vanguard was slowly de-ballasted, finally lifting the Armada Intrepid out of the water. Once the Armada Intrepid was fully out of the water, further inspections were carried out and, finally, deballasting was completed and the load successfully executed. The final task, before sailing, saw some 54 sea fastenings (each comprising approximately 2.5 x 3m brackets) welded into place, to make sure the FPSO would remain secure during the transit, about 54 sea fastenings.  “The operation was executed under ideal circumstances,” says Terpstra. “The weather was perfect, no wind and clear skies, resulting in good sight, which is essential for the operation. Altogether, the operation went well, as per schedule, and no unforeseen circumstances were experienced.”

Preparation
However, loading an FPSO, or any major load, onto the Dockwise Vanguard’s deck requires more than just careful loading and sea fastening – a lot of preparation work is required, making the fast turnaround all the more remarkable. First, the Dockwise Vanguard had to be cleaned following its transport of the Goliat FPSO. Then, the vessel had to be fitted with cribbing material - a 600mm-high wooden layer fixed with angle bars bolted to the deck, on which the Armada Intrepid or any other load would rest. In addition, the guide posts, against which the FPSO is positioned, had to be installed. All of this was done before May 8.
Further, the work will not stop until the FPSO is safely delivered, even though it has been safely loaded and secured. During the voyage, the FPSO, sea fastenings and cribbing are being regularly inspected.
For this transport, Dockwise is also trying something new - having permanent, real-time pressure monitoring on the cribbing. “This is something that has not been doing before and we are trying it,” says Terpstra. “So far we have not been able to this. We will be able to get real time data on this voyage.” All in all, it’s a big job. The Dockwise Vanguard’s crew was increased for the loading operation, from the usual 25/26 to 33, because of the amount of line handling involved, says Terpstra. With Dockwise as the main contractor, the project also used other Boskalis Group companies, including using SMIT Harbour Towage Northwest Europe tugs.
For Hans Leerdam, the biggest achievement is proving the FPSO transport concept. “For me, this is an innovation, a first,” he says. “We are able to show to the market this is a better, faster, more efficient solution to transport ship-shaped FPSOs from one side of the world to another, be it for refitting or new builds. The alternative is a wet tow - at half the speed. We expect the Dockwise Vanguard to cruise up to 12,5 knots. Wet tow speed is about 6-8 knots. You can also be more flexible, going around bad weather. You are safer and more in control.”
In fact, insurance premiums for wet tows are 10 times more expensive than the dry tow alternative, showing that insurance companies recognize that dry transport is a safer solution, says Leerdam.  The Dockwise Vanguard, with the Armada Intrepid on board arrived in South East Asia, early July, sailed via the Cape of Good Hope, without the need for tugs and in less time than a wet tow would have taken. 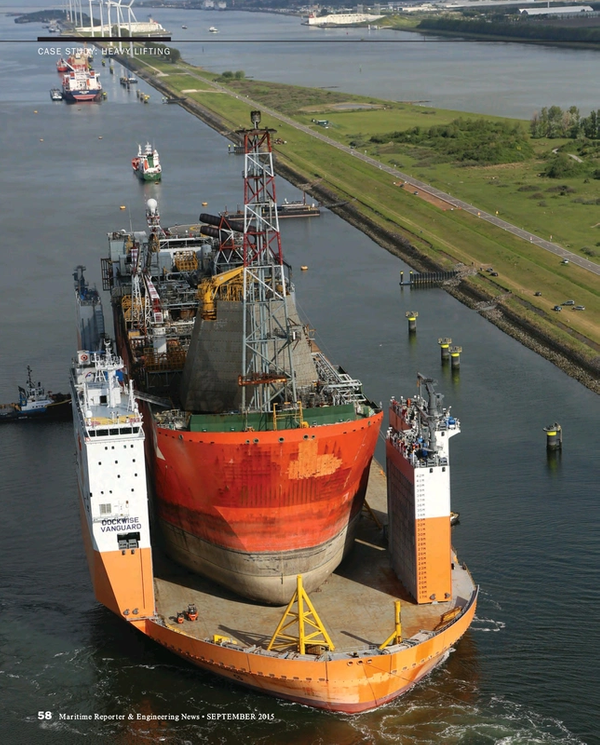