A precipitous plunge in energy pricing is problematic for a prodigious oil producing nation such as Norway, but it really only tells a portion of the story when evaluating the immediate future for the collective maritime and offshore energy markets. Prolonged stagnation in the global economy, growing political tension and instability in several world regions, and a general breakdown in international cooperation all conspire to make the path ahead a perilous one for this wealthy nation of five million. If history serves as a barometer however, Norway will simply pull on its boots, get to work and figure out the best path forward.

What Norway lacks in population size  it compensates nicely in maritime might. The country has a population a shade north of five million, ranking 121st out of 240 countries. But the country is unique in its connection to and affinity for the sea, and cumulatively the maritime industry employs more than 110,000 people (or about 2% of the population) and contributes a value creation of 175 billion NOK ($21.6 billion) per annum. This is according to “Maritime Outlook 2015: Navigating in a New Climate,” a report recently released by the Norwegian Shipowners Association (NSA). While the numbers in the most recent report are impressive, which is an imperative annual tome which discusses the recent history and future direction of the Norwegian market, the numbers do not, never have and never will tell the whole story.
“Maritime” and all that it entails is in the DNA of seemingly every Norwegian, a history, culture and cluster that works as fluidly and efficiently – amongst themselves and in the global maritime community – as any in the world.
While the level of saturation of maritime – and in more recent times the offshore energy sector – is enviable, in some ways it is an economic tightrope act, as both industries are notorious for heavy cycles up and down.

2015 & Beyond
While the prolonged drop in energy pricing is having a direct effect on many Norwegian companies, the dynamics of the industry and its people are diverse and no single factors works to define the whole.
•    Norway is expensive. While  it is a literal hotbed of maritime knowledge and insight, the prospect of ships stamped “Made in Norway” is increasingly rare, as low-cost competitors have cropped up globally, even in the construction of some of the world’s most technically complex vessels.
•    The Maritime Cluster is a core economic engine.  More than 110,000 people worked in the industry in 2013, creating value creation of more than $21.6b, the highest ever recorded and an 11% increase from 2012. Norwegian shipowners accounted for $13.6b. (Note: In Norwegian currency, the Norwegian Krone (NOK), this equaled 102 billion NOK … the first time ever that shipowners created more than NOK 100 billion in value.)
•    Norway is international. While small in population, Norway is influential in many global circles, particularly in terms of maritime and offshore oil and gas. Norway and its companies have effectively helped to redefine the Offshore Service Vessel market today, for example, and the design, outfitting, construction and ownership of these high-performance, high-value, high-spec boats are quietly taking over the Norwgian maritime scene. In fact, according to the NSA report, Norway is the world’s second largest owner of Offshore Service Vessels, second only to the United States. In terms of growth markets, Norway today sees the U.S., Canada and Mexico, followed by Southeast Asia, Brazil, West Africa and China as its most important growth markets.
While the numbers are impressive, the tone looking forward is decidedly reserved, and across the maritime and offshore oil and gas sectors there generally are sentiments that profitability will be lower in 2015, except for the deep sea segement.
While Norwegian shipowners still anticipate an increase in turnover to 268 billion NOK in 2015 (versus 262 billion NOK in 2014), this 2.3 percent increase is markedly less optimistic than the 6 percent increase anticipated in the “2014 Outlook” report. More telling are sentiments surrounding the Norwegian OSV market.
According to the Outlook 2015 report, OSV owners expect turnover to fall by 4.2 percent in 2015, a number made more significant when you consider that it would mark the first fall in turnover in the OSV segment since 2002. Following is a broad statistical abstract of findings from the Maritime Outlook 2015 report. The report in its entirety is a fascinating read, with insightful articles which dig deep into some of the societal, environmental and political issues that are drivers for global maritime trends. Visit:
https://www.rederi.no/en/aktuelt/2015/outlook-2015/

The Value Play
The Norwegian Shipowners Association, courtesy of a study by Menon Business Economics, finds that the value of the global  fleet has increased 10 percent per annum since the year 2000, growing in value from $443 billion in 2000/2001 to $1.52 trillion in 2013/2014. (The study based the valuation on newbuild costs in the various vessel segments adjusted for fleet age and size.) On the Norwegian side of the ledger, its fleet was valued at $87 billion 2013/2014, showing an annual growth of close to 8 percent in the same study timeframe. In the last 10 years the Norwegian fleet has tripled in value, and today it makes up nearly six percent of the global fleet, measured in value. In terms of fleet value, the world maritime powers “Top 10” stack up as follows:

The Norwegian-Controlled Fleet
Despite its small population size, Norway maintains one of the world’s largest and most modern fleet of ships, powered by a strong maritime cluster. Today Offshore Service Vessels – smaller vessels than the traditional deep sea fleet but much higher technical specification and value – make up the largest sector by number of ships, exceeding 600 vessels at the beginning of 2015.
Modern OSV design and technology has strong roots in Norway, and as Gard Sem of Sperre notes in a related story on page 48 of this edition, Norway is an “OSV Mecca.”
While the size and shape of the collective Norwegian fleet is impressive, it is not immune from trends seen in other developed countries, specifically the precipitous fall of the vessels flying the Norwegian flag, via either the NOR or NIS regimes.
Ten years ago 57% of the Norwegian controlled fleet flew the Norwegian flag; today 42% flies the Norwegian flag. Conversely, the number of ships in the Norwegian fleet sailing under foreign flags has grown from 697 in 2005 to 1036 in 2015, a jump of nearly 50%.
The Norwegian fleet as a collective is generally regarded as young and technically advance, a notion proven in numbers, as the average ship age in the Norwegian international fleet has fallen by three years since 2005 to an average age of 11. Part of this anti-aging progress is due to the fact that larger, older tonnage has ‘flagged out.’ At the same time, Norwegian international ship owners possess a healthy new build order book. As of January 1, 2015, Norwegian shipowners have 176 ships on order with a combined value of $12.4b, a 20% increase (in terms of the number of ships) over the previous year, though a far cry from the record 378 ships on order in 2008. Of the 176 ships on order at the beginning of 2015, half were due for delivery in 2015, and around 35% due for delivery in 2016. Of the 176 vessels on order, 32 percent are being built in China, 24 percent are being built in South Korea, and about 15 percent are being built in Norway, confirming the longstanding trend of declining new ship orders in Norwegian shipyards.

(As published in the May 2015 edition of Maritime Reporter & Engineering News - http://magazines.marinelink.com/Magazines/MaritimeReporter) 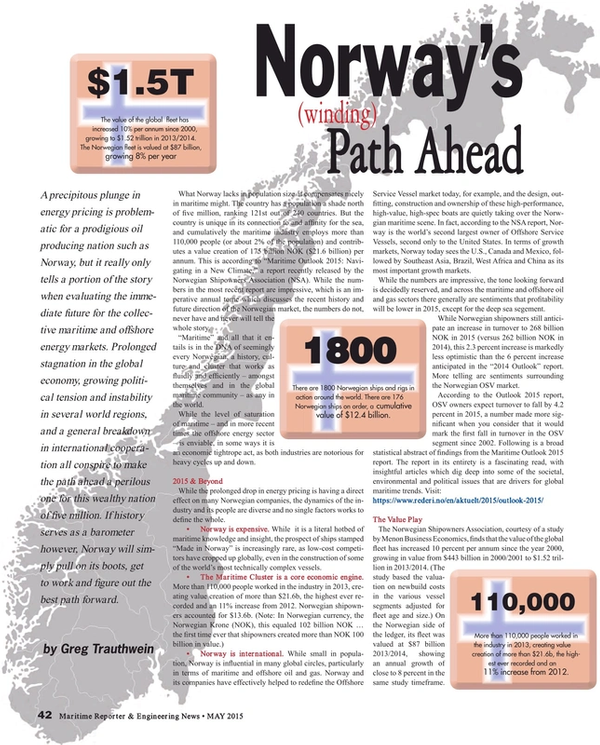 Read Norway’s (Winding) Path Ahead in Pdf, Flash or Html5 edition of May 2015 Maritime Reporter