Today there are 324 oil/gas floating production units are now in service, on order or available for reuse on another field.  FPSOs account for 64% of the existing systems, 79% of systems on order.  Production semis, barges, spars and TLPs comprise the balance.
The oil/gas production floater inventory has increased by four units since last month.  Three FPSOs were ordered in August.  We also reinstated a partially completed production semi,  Octobuoy, which we earlier deleted from the list of orders when the contract was terminated.  This unit was being built for use by ATP in the North Sea.  The builder, Cosco Nantong, took ownership of the partially finished semi after ATP defaulted.  Cosco is now marketing the unit for completion as a production facility.
The number of idle units has grown to 17 FPSOs, 8% of the total FPSO inventory. This is an increase of one unit over last month.   Rubicon Vantage finished producing on the Bualuang field off Thailand.  Its lease ended in 3Q 2014 when a new fixed platform + FSO installation took over production.  The FPSO will remain on the field until Oct 2014 and could have a redeployment contract lined up.  Reuse on the Aje field is a possibility. Another 29 floating LNG processing systems are in service or on order.  Liquefaction floaters account for 17%, regasification floaters 83%.  No liquefaction floaters are yet in service – all 5 are on order.  Total LNG inventory is the same as last month.  In addition, 102 floating storage units are in service, on order or available.  (See Chart 1).

Recent Orders
August was an active month for production floater orders. Three production systems were ordered, all FPSOs.   Two are for use in Brazil, one for use in Indonesia.  The total value of the three EPC contracts is around $3 billion.
•    Teekay/Odebrecht in early-August was the successful bidder to supply a midsize FPSO to Petrobras for use as an extended well test unit on the ultra-deepwater Libra complex off Brazil.  The lease is for 8 years firm with two 2 year extension options.  If all options are exercised the unit will remain on contract through 2029.   The lease rate is reported to be $543,590 per day.  Included in the contract are two sets of mooring systems to enable the mooring to be pre-set on the next location where the FPSO will be used for testing.   The 20 year old shuttle tanker Navion Norvegia will be used as the conversion hull.  Hull/topsides capex is estimated to be ~$0.7 billion.   With this order, Teekay now has two FPSO construction contracts in progress.
•    Bumi Armada in mid-August signed a contract with ENI to supply a VLCC-size FPSO for use as the East Hub on Block 15/06 off Angola.   The lease is for 12 years firm with options for 8 yearly extensions.   During the firm lease period, the lease payment will average $684,930 per day.   In the option period the payment will drop to $308,220 per day.  An existing tanker will be used as the conversion hull.   This is Bumi Armada’s first VLCC-size FPSO.  Capex for the project is in the area of $1.0 billion.   Bumi Armada now has four FPSO construction projects simultaneously underway.
•    Modec/Schahin in late-August was the low bidder on the tender to lease a VLCC-size FPSO for the Tartaruga field in the Campos Basin.  The lease is for 20 years.  Two contractors submitted bids.  Modec/Schahin’s lease offer was reported to be $780,000 per day. The competing offer from Bumi Amada/UTC was said to be $1,008,000 per day – $228,000 per day higher.   Conversion of tanker is to be in Asia, topsides fabrication/integration in Brazil.   Hull/topsides capex is estimated to be ~$1.3 billion.  Modec now has four FPSOs construction projects at various degrees of completion.
Order Backlog – 64 production floaters are on order as of beginning September, midway in a range of order backlog that has prevailed since early 2012.   (See Graph 1).
Floater Projects in the Planning Stage
There are 229 floating production projects are in various stages of planning as of beginning September.  Of these, 58% involve an FPSO, 13% another type oil/gas production floater, 23% liquefaction or regasification floater and 6% storage/offloading floater.
Among new opportunities since last month, Petrobras is considering leasing an FPSO for use as a pilot production unit on the Libra complex in Santos Basin.  It would serve as an interim facility between the EWT FPSO and the long term production FPSOs to be employed on the complex.  The unit would have production capability in the range of 100,000 b/d.   This would be a near term contract, should Petrobras proceed with the requirement. (See Chart 2).
Brazil, Africa and SE Asia continue to be the major locations of floating production projects in the visible planning stage.  We are tracking 43 projects in Brazil, 49 in Africa and 39 projects in SEA – 57% of the visible planned floating production projects worldwide.  Several large projects in Brazil and (less so) Africa will require multiple production units.   Overall, 250 to 270 production floaters of various types will be required for the 229 projects we are tracking. (See Chart 3).
Around 13% of the 229 visible planned projects are likely to advance to the EPC contracting stage within the next 18 months.   These projects typically have either entered the FEED phase, pre-qualification of floater contractors has been initiated or bidding/negotiation is in progress.
Another 50% of the visible projects are at a stage of development where the EPC contract for the production unit is likely within the next 18 to 48 months.   The remaining 37% of projects are less advanced in planning, with the EPC contract likely 4 to 10 years out.

Future Business Drivers for Equipment Orders
As indicated above, there is no shortage of floating production projects in the planning stage.   But an investment decision is needed to transform these project opportunities into contracts for production facilities.  In large projects, the investment decision is a huge commitment entailing billions of dollars in capital expenditure.  Even small floater projects entail several hundred million dollars of capex.
There is a growing list of deepwater projects that have been recently deferred at the final investment stage.  Gehem/Gendalo is the latest example.  Chevron has decided to rebid (for the second time) the $2.5+ billion EPC contract for two production barges.  Others include Statoil rethinking the planned $6 billion Bressay heavy oil project in the UK North Sea, Chevron to stop, at least temporarily, the $10 billion Rosebank project offshore the UK Shetlands Islands and BP delaying proceeding with the $10+ billion Mad Dog 2 project in the GOM.  Each deferral of a production floater investment decision has unique reasons – but all eventually come down to management not wanting to take the risk of proceeding. So a long list of projects ready to move to development is only part of the story.  It provides the inventory of possible projects – but not the tempo of future orders.  Ultimately, the pace at which potential projects will be transformed into orders for new production systems will depend on twelve underlying business drivers:

IMA provides market analysis and strategic planning advice in the marine and offshore sectors. Over 40 years we have performed more than 350 business consulting assignments for 170+ clients in 40+ countries.
t: 1 202 333 8501; e: imaassoc@msn.com

(As published in the September 2014 edition of Maritime Reporter & Engineering News - http://magazines.marinelink.com/Magazines/MaritimeReporter) 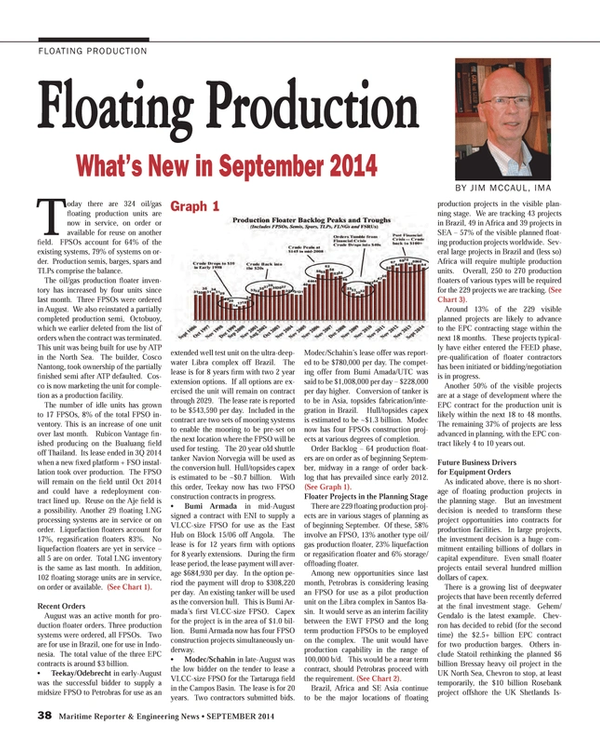