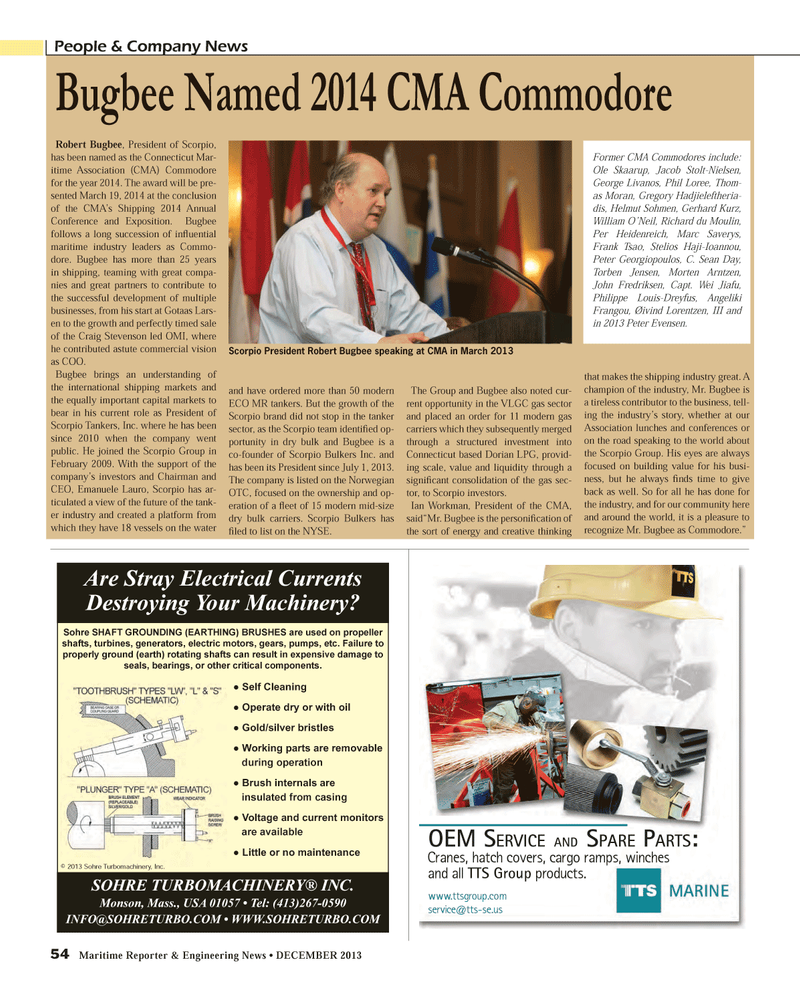 54 Maritime Reporter & Engineering News ? DECEMBER 2013 People & Company NewsRobert Bugbee, President of Scorpio, has been named as the Connecticut Mar- itime Association (CMA) Commodore for the year 2014. The award will be pre- sented March 19, 2014 at the conclusion of the CMA?s Shipping 2014 Annual Conference and Exposition. Bugbee follows a long succession of inß uential maritime industry leaders as Commo-dore. Bugbee has more than 25 years in shipping, teaming with great compa-nies and great partners to contribute to the successful development of multiple businesses, from his start at Gotaas Lars-en to the growth and perfectly timed sale of the Craig Stevenson led OMI, where he contributed astute commercial vision as COO.Bugbee brings an understanding of the international shipping markets and the equally important capital markets to bear in his current role as President of Scorpio Tankers, Inc. where he has been since 2010 when the company went public. He joined the Scorpio Group in February 2009. With the support of the company?s investors and Chairman and CEO, Emanuele Lauro, Scorpio has ar- ticulated a view of the future of the tank-er industry and created a platform from which they have 18 vessels on the water and have ordered more than 50 modern ECO MR tankers. But the growth of the Scorpio brand did not stop in the tanker sector, as the Scorpio team identi Þ ed op- portunity in dry bulk and Bugbee is a co-founder of Scorpio Bulkers Inc. and has been its President since July 1, 2013. The company is listed on the Norwegian OTC, focused on the ownership and op-eration of a ß eet of 15 modern mid-size dry bulk carriers. Scorpio Bulkers has Þ led to list on the NYSE. The Group and Bugbee also noted cur- rent opportunity in the VLGC gas sector and placed an order for 11 modern gas carriers which they subsequently merged through a structured investment into Connecticut based Dorian LPG, provid-ing scale, value and liquidity through a signiÞ cant consolidation of the gas sec- tor, to Scorpio investors. Ian Workman, President of the CMA, said?Mr. Bugbee is the personi Þ cation of the sort of energy and creative thinking that makes the shipping industry great. A champion of the industry, Mr. Bugbee is a tireless contributor to the business, tell-ing the industry?s story, whether at our Association lunches and conferences or on the road speaking to the world about the Scorpio Group. His eyes are always focused on building value for his busi-ness, but he always Þ nds time to give back as well. So for all he has done for the industry, and for our community here and around the world, it is a pleasure to recognize Mr. Bugbee as Commodore.? SOHRE TURBOMACHINERY® INC. 0RQVRQ0DVV86$?7HO ,1)2#62+5(785%2&20?:::62+5(785%2&20 $UH6WUD\(OHFWULFDO&XUUHQWV'HVWUR\LQJ<RXU0DFKLQHU\" Sohre SHAFT GROUNDING (EARTHING) BRUSHES are used on propeller shafts, turbines, generators, electric motors, gears, pumps, etc. Failure to properly ground (earth) rotating shafts can result in expensive damage to seals, bearings, or other critical components.?6HOI&OHDQLQJ?2SHUDWHGU\RUZLWKRLO?*ROGVLOYHUEULVWOHV?:RUNLQJSDUWVDUHUHPRYDEOH during operation?%UXVKLQWHUQDOVDUH insulated from casing?9ROWDJHDQGFXUUHQWPRQLWRUV are available?/LWWOHRUQRPDLQWHQDQFH © 2013 Sohre Turbomachinery, Inc. OEM SERVICE AND SPARE PARTS:Cranes, hatch covers, cargo ramps, winches and all TTS Group products. www.ttsgroup.com service@tts-se.usBugbee Named 2014 CMA Commodore Scorpio President Robert Bugbee speaking at CMA in March 2013 Former CMA Commodores include: Ole Skaarup, Jacob Stolt-Nielsen, George Livanos, Phil Loree, Thom- as Moran, Gregory Hadjieleftheria- dis, Helmut Sohmen, Gerhard Kurz, William O?Neil, Richard du Moulin, Per Heidenreich, Marc Saverys, Frank Tsao, Stelios Haji-Ioannou, Peter Georgiopoulos, C. Sean Day, Torben Jensen, Morten Arntzen, John Fredriksen, Capt. Wei Jiafu, Philippe Louis-Dreyfus, Angeliki Frangou, Øivind Lorentzen, III and in 2013 Peter Evensen.MR #12 (50-57).indd 54MR #12 (50-57).indd 5412/6/2013 9:59:33 AM12/6/2013 9:59:33 AM