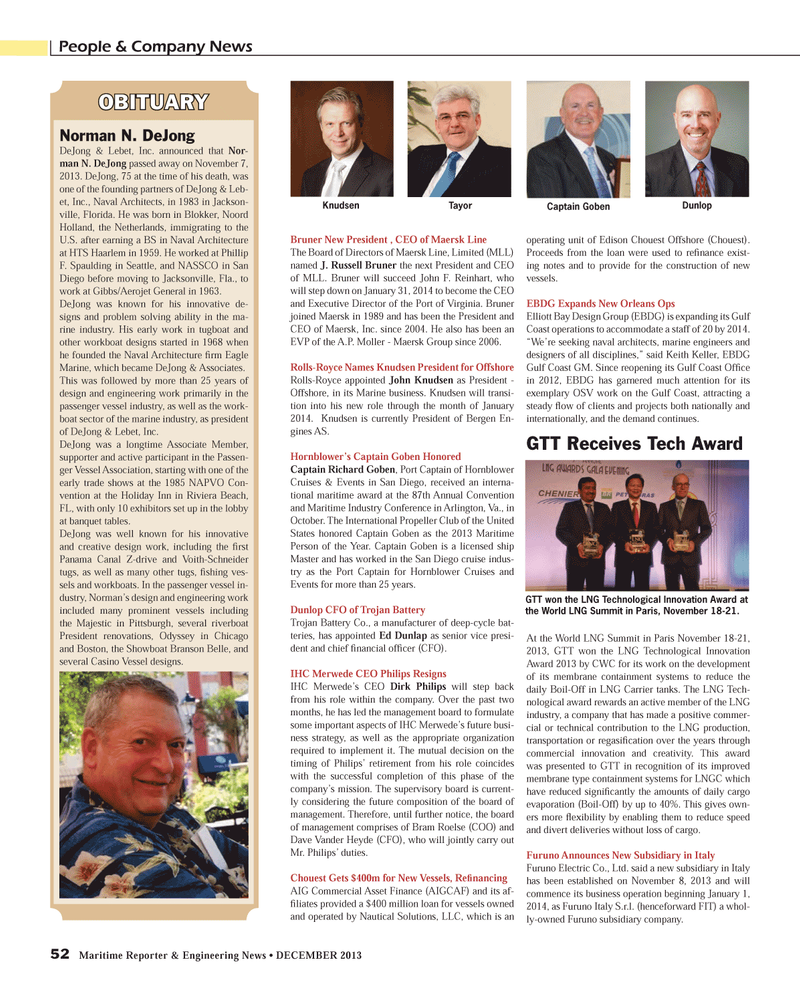 52 Maritime Reporter & Engineering News ? DECEMBER 2013 Bruner New President , CEO of Maersk Line The Board of Directors of Maersk Line, Limited (MLL) named J. Russell Bruner the next President and CEO of MLL. Bruner will succeed John F. Reinhart, who will step down on January 31, 2014 to become the CEO and Executive Director of the Port of Virginia. Bruner joined Maersk in 1989 and has been the President and CEO of Maersk, Inc. since 2004. He also has been an EVP of the A.P. Moller - Maersk Group since 2006. Rolls-Royce Names Knudsen President for Offshore Rolls-Royce appointed John Knudsen as President - Offshore, in its Marine business. Knudsen will transi- tion into his new role through the month of January 2014. Knudsen is currently President of Bergen En-gines AS. Hornblower?s Captain Goben Honored Captain Richard Goben, Port Captain of Hornblower Cruises & Events in San Diego, received an interna-tional maritime award at the 87th Annual Convention and Maritime Industry Conference in Arlington, Va., in October. The International Propeller Club of the United States honored Captain Goben as the 2013 Maritime Person of the Year. Captain Goben is a licensed ship Master and has worked in the San Diego cruise indus-try as the Port Captain for Hornblower Cruises and Events for more than 25 years.Dunlop CFO of Trojan Battery Trojan Battery Co., a manufacturer of deep-cycle bat- teries, has appointed Ed Dunlap as senior vice presi-dent and chief Þ nancial of Þ cer (CFO). IHC Merwede CEO Philips ResignsIHC Merwede?s CEO Dirk Philips will step back from his role within the company. Over the past two months, he has led the management board to formulate some important aspects of IHC Merwede?s future busi-ness strategy, as well as the appropriate organization required to implement it. The mutual decision on the timing of Philips? retirement from his role coincides with the successful completion of this phase of the company?s mission. The supervisory board is current- ly considering the future composition of the board of management. Therefore, until further notice, the board of management comprises of Bram Roelse (COO) and Dave Vander Heyde (CFO), who will jointly carry out Mr. Philips? duties. Chouest Gets $400m for New Vessels, Re Þ nancingAIG Commercial Asset Finance (AIGCAF) and its af- Þ liates provided a $400 million loan for vessels owned and operated by Nautical Solutions, LLC, which is an operating unit of Edison Chouest Offshore (Chouest). Proceeds from the loan were used to reÞ nance exist- ing notes and to provide for the construction of new vessels. EBDG Expands New Orleans OpsElliott Bay Design Group (EBDG) is expanding its Gulf Coast operations to accommodate a staff of 20 by 2014. ?We?re seeking naval architects, marine engineers and designers of all disciplines,? said Keith Keller, EBDG Gulf Coast GM. Since reopening its Gulf Coast OfÞ ce in 2012, EBDG has garnered much attention for its exemplary OSV work on the Gulf Coast, attracting a steady ß ow of clients and projects both nationally and internationally, and the demand continues. GTT Receives Tech Award At the World LNG Summit in Paris November 18-21, 2013, GTT won the LNG Technological Innovation Award 2013 by CWC for its work on the development of its membrane containment systems to reduce the daily Boil-Off in LNG Carrier tanks. The LNG Tech- nological award rewards an active member of the LNG industry, a company that has made a positive commer- cial or technical contribution to the LNG production, transportation or regasiÞ cation over the years through commercial innovation and creativity. This award was presented to GTT in recognition of its improved membrane type containment systems for LNGC which have reduced signiÞ cantly the amounts of daily cargo evaporation (Boil-Off) by up to 40%. This gives own- ers more ß exibility by enabling them to reduce speed and divert deliveries without loss of cargo. Furuno Announces New Subsidiary in Italy Furuno Electric Co., Ltd. said a new subsidiary in Italy has been established on November 8, 2013 and will commence its business operation beginning January 1, 2014, as Furuno Italy S.r.l. (henceforward FIT) a whol- ly-owned Furuno subsidiary company.People & Company NewsKnudsenTayor Captain GobenDunlopNorman N. DeJongDeJong & Lebet, Inc. announced that Nor- man N. DeJong passed away on November 7, 2013. DeJong, 75 at the time of his death, was one of the founding partners of DeJong & Leb-et, Inc., Naval Architects, in 1983 in Jackson- ville, Florida. He was born in Blokker, Noord Holland, the Netherlands, immigrating to the U.S. after earning a BS in Naval Architecture at HTS Haarlem in 1959. He worked at Phillip F. Spaulding in Seattle, and NASSCO in San Diego before moving to Jacksonville, Fla., to work at Gibbs/Aerojet General in 1963.DeJong was known for his innovative de-signs and problem solving ability in the ma-rine industry. His early work in tugboat and other workboat designs started in 1968 when he founded the Naval Architecture Þ rm Eagle Marine, which became DeJong & Associates. This was followed by more than 25 years of design and engineering work primarily in the passenger vessel industry, as well as the work- boat sector of the marine industry, as president of DeJong & Lebet, Inc.DeJong was a longtime Associate Member, supporter and active participant in the Passen-ger Vessel Association, starting with one of the early trade shows at the 1985 NAPVO Con-vention at the Holiday Inn in Riviera Beach, FL, with only 10 exhibitors set up in the lobby at banquet tables.DeJong was well known for his innovative and creative design work, including the Þ rst Panama Canal Z-drive and Voith-Schneider tugs, as well as many other tugs, Þ shing ves- sels and workboats. In the passenger vessel in-dustry, Norman?s design and engineering work included many prominent vessels including the Majestic in Pittsburgh, several riverboat President renovations, Odyssey in Chicago and Boston, the Showboat Branson Belle, and several Casino Vessel designs. OBITUARY OBITUARY GTT won the LNG Technological Innovation Award at the World LNG Summit in Paris, November 18-21. MR #12 (50-57).indd 52MR #12 (50-57).indd 5212/6/2013 9:57:59 AM12/6/2013 9:57:59 AM