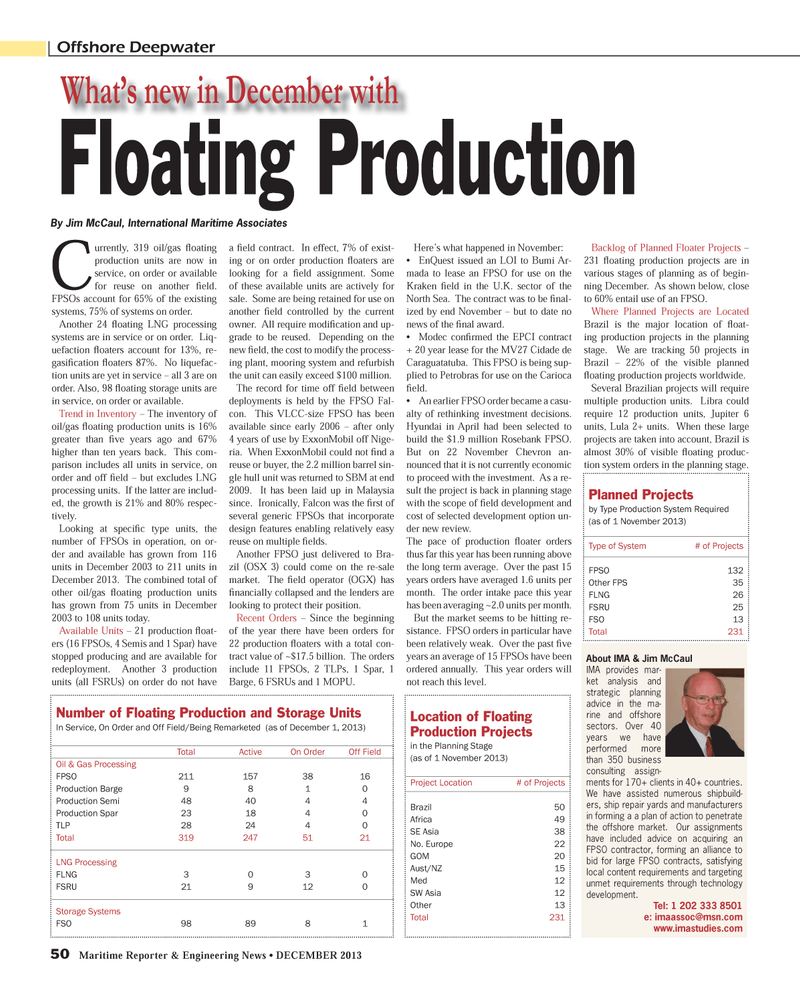 50 Maritime Reporter & Engineering News ? DECEMBER 2013 Currently, 319 oil/gas ß oating production units are now in service, on order or available for reuse on another Þ eld. FPSOs account for 65% of the existing systems, 75% of systems on order. Another 24 ß oating LNG processing systems are in service or on order. Liq- uefaction ß oaters account for 13%, re- gasiÞ cation ß oaters 87%. No liquefac- tion units are yet in service ? all 3 are on order. Also, 98 ß oating storage units are in service, on order or available.Trend in Inventory ? The inventory of oil/gas ß oating production units is 16% greater than Þ ve years ago and 67% higher than ten years back. This com- parison includes all units in service, on order and off Þ eld ? but excludes LNG processing units. If the latter are includ-ed, the growth is 21% and 80% respec-tively. Looking at speciÞ c type units, the number of FPSOs in operation, on or- der and available has grown from 116 units in December 2003 to 211 units in December 2013. The combined total of other oil/gas ß oating production units has grown from 75 units in December 2003 to 108 units today. Available Units ? 21 production ß oat-ers (16 FPSOs, 4 Semis and 1 Spar) have stopped producing and are available for redeployment. Another 3 production units (all FSRUs) on order do not have a Þ eld contract. In effect, 7% of exist- ing or on order production ß oaters are looking for a Þ eld assignment. Some of these available units are actively for sale. Some are being retained for use on another Þ eld controlled by the current owner. All require modi Þ cation and up- grade to be reused. Depending on the new Þ eld, the cost to modify the process- ing plant, mooring system and refurbish the unit can easily exceed $100 million. The record for time off Þ eld between deployments is held by the FPSO Fal-con. This VLCC-size FPSO has been available since early 2006 ? after only 4 years of use by ExxonMobil off Nige- ria. When ExxonMobil could not Þ nd a reuse or buyer, the 2.2 million barrel sin- gle hull unit was returned to SBM at end 2009. It has been laid up in Malaysia since. Ironically, Falcon was the Þ rst of several generic FPSOs that incorporate design features enabling relatively easy reuse on multiple Þ elds. Another FPSO just delivered to Bra-zil (OSX 3) could come on the re-sale market. The Þ eld operator (OGX) has Þ nancially collapsed and the lenders are looking to protect their position.Recent Orders ? Since the beginning of the year there have been orders for 22 production ß oaters with a total con- tract value of ~$17.5 billion. The orders include 11 FPSOs, 2 TLPs, 1 Spar, 1 Barge, 6 FSRUs and 1 MOPU. Here?s what happened in November: ? EnQuest issued an LOI to Bumi Ar- mada to lease an FPSO for use on the Kraken Þ eld in the U.K. sector of the North Sea. The contract was to be Þ nal-ized by end November ? but to date no news of the Þ nal award. ? Modec con Þ rmed the EPCI contract + 20 year lease for the MV27 Cidade de Caraguatatuba. This FPSO is being sup- plied to Petrobras for use on the Carioca Þ eld.? An earlier FPSO order became a casu- alty of rethinking investment decisions. Hyundai in April had been selected to build the $1.9 million Rosebank FPSO. But on 22 November Chevron an-nounced that it is not currently economic to proceed with the investment. As a re- sult the project is back in planning stage with the scope of Þ eld development and cost of selected development option un-der new review. The pace of production ß oater orders thus far this year has been running above the long term average. Over the past 15 years orders have averaged 1.6 units per month. The order intake pace this year has been averaging ~2.0 units per month.But the market seems to be hitting re-sistance. FPSO orders in particular have been relatively weak. Over the past Þ ve years an average of 15 FPSOs have been ordered annually. This year orders will not reach this level. Backlog of Planned Floater Projects ? 231 ß oating production projects are in various stages of planning as of begin-ning December. As shown below, close to 60% entail use of an FPSO. Where Planned Projects are Located Brazil is the major location of ß oat-ing production projects in the planning stage. W e are tracking 50 projects in Brazil ? 22% of the visible planned ß oating production projects worldwide. Several Brazilian projects will require multiple production units. Libra could require 12 production units, Jupiter 6 units, Lula 2+ units. When these large projects are taken into account, Brazil is almost 30% of visible ß oating produc- tion system orders in the planning stage.Floating Production What?s new in December with By Jim McCaul, International Maritime AssociatesNumber of Floating Production and Storage Units In Service, On Order and Off Field/Being Remarketed (as of December 1, 2013) Total Active On Order Off Field Oil & Gas ProcessingFPSO 211 157 38 16 Production Barge 9 8 1 0 Production Semi 48 40 4 4Production Spar 23 18 4 0TLP 28 24 4 0Total 319 247 51 21 LNG ProcessingFLNG 3 0 3 0FSRU 21 9 12 0 Storage Systems FSO 98 89 8 1Offshore DeepwaterAbout IMA & Jim McCaulIMA provides mar- ket analysis and strategic planning advice in the ma-rine and offshore sectors. Over 40 years we have performed more than 350 business consulting assign-ments for 170+ clients in 40+ countries. We have assisted numerous shipbuild- ers, ship repair yards and manufacturers in forming a a plan of action to penetrate the offshore market. Our assignments have included advice on acquiring an FPSO contractor, forming an alliance to bid for large FPSO contracts, satisfying local content requirements and targeting unmet requirements through technology development.Tel: 1 202 333 8501 e: imaassoc@msn.com www.imastudies.comPlanned Projects by Type Production System Required (as of 1 November 2013) Type of System # of Projects FPSO 132 Other FPS 35FLNG 26FSRU 25FSO 13 Total 231 Location of Floating Production Projects in the Planning Stage(as of 1 November 2013) Project Location # of Projects Brazil 50Africa 49SE Asia 38No. Europe 22GOM 20Aust/NZ 15 Med 12SW Asia 12 Other 13 Total 231 MR #12 (50-57).indd 50MR #12 (50-57).indd 5012/9/2013 12:07:22 PM12/9/2013 12:07:22 PM