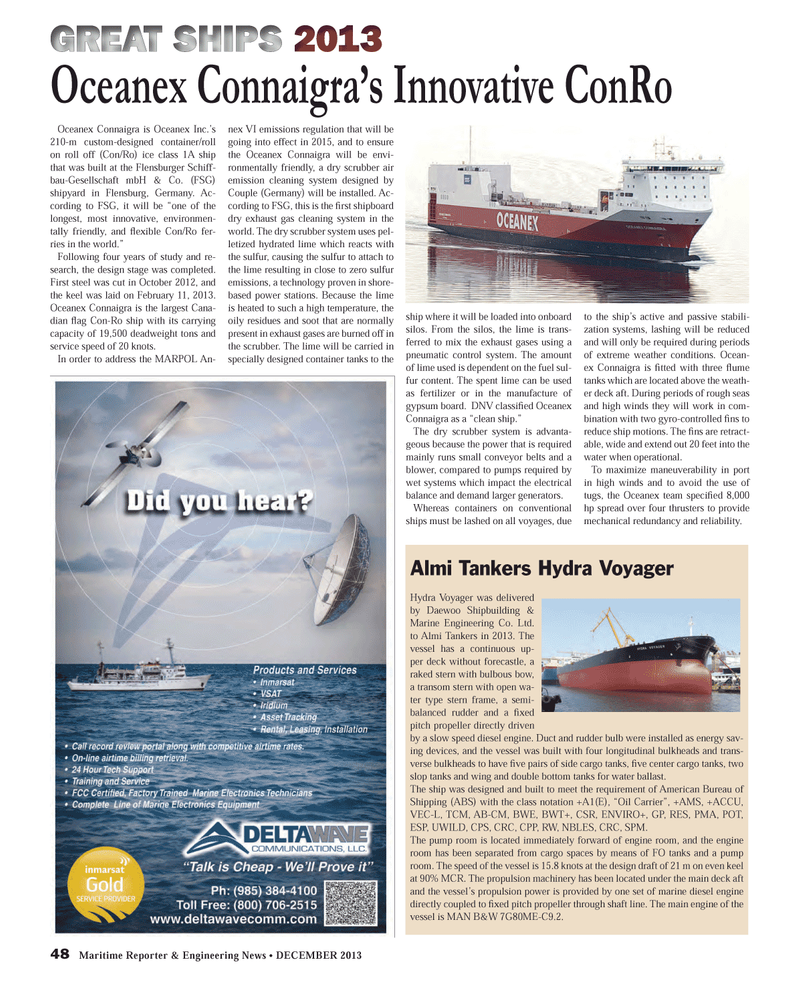 48 Maritime Reporter & Engineering News ? DECEMBER 2013 Oceanex Connaigra is Oceanex Inc.?s 210-m custom-designed container/roll on roll off (Con/Ro) ice class 1A ship that was built at the Flensburger Schiff- bau-Gesellschaft mbH & Co. (FSG) shipyard in Flensburg, Germany. Ac- cording to FSG, it will be ?one of the longest, most innovative, environmen-tally friendly, and ß exible Con/Ro fer- ries in the world.?Following four years of study and re-search, the design stage was completed. First steel was cut in October 2012, and the keel was laid on February 11, 2013. Oceanex Connaigra is the largest Cana- dian ß ag Con-Ro ship with its carrying capacity of 19,500 deadweight tons and service speed of 20 knots. In order to address the MARPOL An- nex VI emissions regulation that will be going into effect in 2015, and to ensure the Oceanex Connaigra will be envi-ronmentally friendly, a dry scrubber air emission cleaning system designed by Couple (Germany) will be installed. Ac- cording to FSG, this is the Þ rst shipboard dry exhaust gas cleaning system in the world. The dry scrubber system uses pel- letized hydrated lime which reacts with the sulfur, causing the sulfur to attach to the lime resulting in close to zero sulfur emissions, a technology proven in shore-based power stations. Because the lime is heated to such a high temperature, the oily residues and soot that are normally present in exhaust gases are burned off in the scrubber. The lime will be carried in specially designed container tanks to the ship where it will be loaded into onboard silos. From the silos, the lime is trans-ferred to mix the exhaust gases using a pneumatic control system. The amount of lime used is dependent on the fuel sul-fur content. The spent lime can be used as fertilizer or in the manufacture of gypsum board. DNV classi Þ ed Oceanex Connaigra as a ?clean ship.? The dry scrubber system is advanta-geous because the power that is required mainly runs small conveyor belts and a blower, compared to pumps required by wet systems which impact the electrical balance and demand larger generators. Whereas containers on conventional ships must be lashed on all voyages, due to the ship?s active and passive stabili- zation systems, lashing will be reduced and will only be required during periods of extreme weather conditions. Ocean-ex Connaigra is Þ tted with three ß ume tanks which are located above the weath-er deck aft. During periods of rough seas and high winds they will work in com-bination with two gyro-controlled Þ ns to reduce ship motions. The Þ ns are retract- able, wide and extend out 20 feet into the water when operational. To maximize maneuverability in port in high winds and to avoid the use of tugs, the Oceanex team speciÞ ed 8,000 hp spread over four thrusters to provide mechanical redundancy and reliability. Oceanex Connaigra?s Innovative ConRo Almi Tankers Hydra Voyager Hydra Voyager was delivered by Daewoo Shipbuilding & Marine Engineering Co. Ltd. to Almi Tankers in 2013. The vessel has a continuous up-per deck without forecastle, a raked stern with bulbous bow, a transom stern with open wa-ter type stern frame, a semi-balanced rudder and a Þ xed pitch propeller directly driven by a slow speed diesel engine. Duct and rudder bulb were installed as energy sav- ing devices, and the vessel was built with four longitudinal bulkheads and trans-verse bulkheads to have Þ ve pairs of side cargo tanks, Þ ve center cargo tanks, two slop tanks and wing and double bottom tanks for water ballast.The ship was designed and built to meet the requirement of American Bureau of Shipping (ABS) with the class notation +A1(E), ?Oil Carrier?, +AMS, +ACCU, VEC-L, TCM, AB-CM, BWE, BWT+, CSR, ENVIRO+, GP, RES, PMA, POT, ESP, UWILD, CPS, CRC, CPP, RW, NBLES, CRC, SPM. The pump room is located immediately forward of engine room, and the engine room has been separated from cargo spaces by means of FO tanks and a pump room. The speed of the vessel is 15.8 knots at the design draft of 21 m on even keel at 90% MCR. The propulsion machinery has been located under the main deck aft and the vessel?s propulsion power is provided by one set of marine diesel engine directly coupled to Þ xed pitch propeller through shaft line. The main engine of the vessel is MAN B&W 7G80ME-C9.2. MR #12 (42-49).indd 48MR #12 (42-49).indd 4812/9/2013 12:05:12 PM12/9/2013 12:05:12 PM