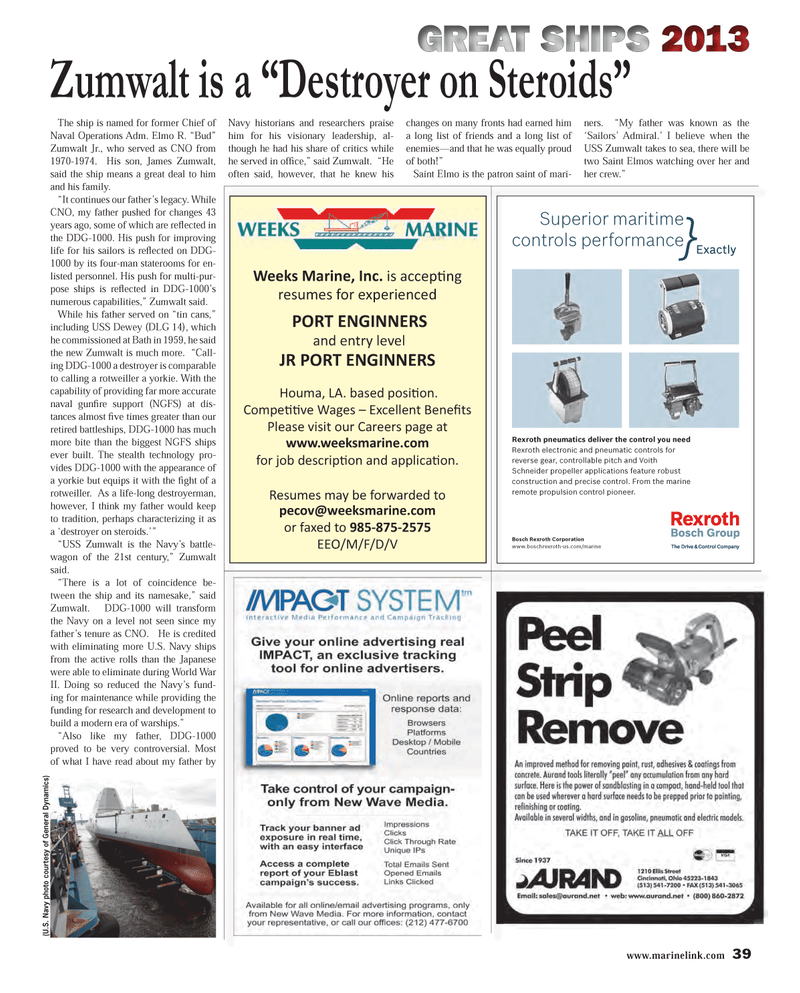 www.marinelink.com 39(U.S. Navy photo courtesy of General Dynamics) Zumwalt is a ?Destroyer on Steroids? The ship is named for former Chief of Naval Operations Adm. Elmo R. ?Bud? Zumwalt Jr., who served as CNO from 1970-1974. His son, James Zumwalt, said the ship means a great deal to him and his family. ?It continues our father?s legacy. While CNO, my father pushed for changes 43 years ago, some of which are reß ected in the DDG-1000. His push for improving life for his sailors is reß ected on DDG- 1000 by its four-man staterooms for en- listed personnel. His push for multi-pur- pose ships is reß ected in DDG-1000?s numerous capabilities,? Zumwalt said.While his father served on ?tin cans,? including USS Dewey (DLG 14), which he commissioned at Bath in 1959, he said the new Zumwalt is much more. ?Call-ing DDG-1000 a destroyer is comparable to calling a rotweiller a yorkie. With the capability of providing far more accurate naval gunÞ re support (NGFS) at dis- tances almost Þ ve times greater than our retired battleships, DDG-1000 has much more bite than the biggest NGFS ships ever built. The stealth technology pro- vides DDG-1000 with the appearance of a yorkie but equips it with the Þ ght of a rotweiller. As a life-long destroyerman, however, I think my father would keep to tradition, perhaps characterizing it as a ?destroyer on steroids.???USS Zumwalt is the Navy?s battle- wagon of the 21st century,? Zumwalt said.?There is a lot of coincidence be-tween the ship and its namesake,? said Zumwalt. DDG-1000 will transform the Navy on a level not seen since my father?s tenure as CNO. He is credited with eliminating more U.S. Navy ships from the active rolls than the Japanese were able to eliminate during World War II. Doing so reduced the Navy?s fund- ing for maintenance while providing the funding for research and development to build a modern era of warships.??Also like my father, DDG-1000 proved to be very controversial. Most of what I have read about my father by Navy historians and researchers praise him for his visionary leadership, al-though he had his share of critics while he served in ofÞ ce,? said Zumwalt. ?He often said, however, that he knew his changes on many fronts had earned him a long list of friends and a long list of enemies?and that he was equally proud of both!?Saint Elmo is the patron saint of mari-ners. ?My father was known as the ?Sailors? Admiral.? I believe when the USS Zumwalt takes to sea, there will be two Saint Elmos watching over her and her crew.? Rexroth pneumatics deliver the control you need Rexroth electronic and pneumatic controls for reverse gear, controllable pitch and Voith Schneider propeller applications feature robust construction and precise control. From the marine remote propulsion control pioneer. Bosch Rexroth Corporation www.boschrexroth-us.com/marine Superior maritimecontrols performance Exactly Weeks Marine, Inc. ]??vP ?µu(}?Æ??]v PORT ENGINNERS vv??ÇoÀo JR PORT ENGINNERS ,}µuU>X?}]?}vX }u???ÀtPtÆoov?v. ? WoÀ]]?}µ????P? www.weeksmarine.com (}?i}?]?? }vv??o]? }vX ZµuuÇ(}?Á??} pecov@weeksmarine.com }?(Æ?} 985-875-2575KlDl&lls MR #12 (34-41).indd 39MR #12 (34-41).indd 3912/10/2013 12:33:41 PM12/10/2013 12:33:41 PM