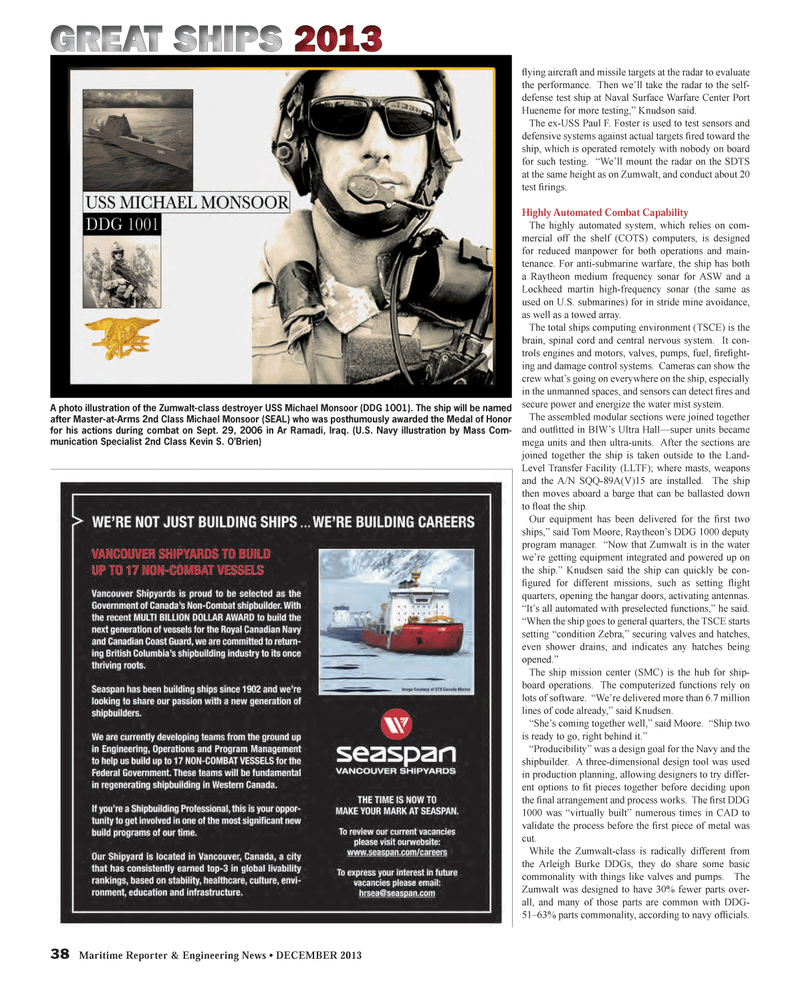 38 Maritime Reporter & Engineering News ? DECEMBER 2013 ß ying aircraft and missile targets at the radar to evaluate the performance. Then weÕll take the radar to the self- defense test ship at Naval Surface Warfare Center Port Hueneme for more testing,Ó Knudson said.The ex-USS Paul F. Foster is used to test sensors and defensive systems against actual targets Þ red toward the ship, which is operated remotely with nobody on board for such testing. ÒWeÕll mount the radar on the SDTS at the same height as on Zumwalt, and conduct about 20 test Þ rings. Highly Automated Combat Capability The highly automated system, which relies on com-mercial off the shelf (COTS) computers, is designed for reduced manpower for both operations and main-tenance. For anti-submarine warfare, the ship has both a Raytheon medium frequency sonar for ASW and a Lockheed martin high-frequency sonar (the same as used on U.S. submarines) for in stride mine avoidance, as well as a towed array. The total ships computing environment (TSCE) is the brain, spinal cord and central nervous system. It con-trols engines and motors, valves, pumps, fuel, Þ reÞ ght- ing and damage control systems. Cameras can show the crew whatÕs going on everywhere on the ship, especially in the unmanned spaces, and sensors can detect Þ res and secure power and energize the water mist system. The assembled modular sections were joined together and outÞ tted in BIWÕs Ultra HallÑsuper units became mega units and then ultra-units. After the sections are joined together the ship is taken outside to the Land-Level Transfer Facility (LLTF); where masts, weapons and the A/N SQQ-89A(V)15 are installed. The ship then moves aboard a barge that can be ballasted down to ß oat the ship. Our equipment has been delivered for the Þ rst two ships,Ó said Tom Moore, RaytheonÕs DDG 1000 deputy program manager. ÒNow that Zumwalt is in the water weÕre getting equipment integrated and powered up on the ship.Ó Knudsen said the ship can quickly be con-Þ gured for different missions, such as setting ß ight quarters, opening the hangar doors, activating antennas. ÒItÕs all automated with preselected functions,Ó he said. ÒWhen the ship goes to general quarters, the TSCE starts setting Òcondition Zebra,Ó securing valves and hatches, even shower drains, and indicates any hatches being opened.ÓThe ship mission center (SMC) is the hub for ship-board operations. The computerized functions rely on lots of software. ÒWeÕre delivered more than 6.7 million lines of code already,Ó said Knudsen. ÒSheÕs coming together well,Ó said Moore. ÒShip two is ready to go, right behind it.ÓÒProducibilityÓ was a design goal for the Navy and the shipbuilder. A three-dimensional design tool was used in production planning, allowing designers to try differ- ent options to Þ t pieces together before deciding upon the Þ nal arrangement and process works. The Þ rst DDG 1000 was Òvirtually builtÓ numerous times in CAD to validate the process before the Þ rst piece of metal was cut. While the Zumwalt-class is radically different from the Arleigh Burke DDGs, they do share some basic commonality with things like valves and pumps. The Zumwalt was designed to have 30% fewer parts over- all, and many of those parts are common with DDG-51Ð63% parts commonality, according to navy ofÞ cials.A photo illustration of the Zumwalt-class destroyer USS Michael Monsoor (DDG 1001). The ship will be named after Master-at-Arms 2nd Class Michael Monsoor (SEAL) who was posthumously awarded the Medal of Honor for his actions during combat on Sept. 29, 2006 in Ar Ramadi, Iraq. (U.S. Navy illustration by Mass Com-munication Specialist 2nd Class Kevin S. O?Brien)MR #12 (34-41).indd 38MR #12 (34-41).indd 3812/9/2013 10:48:00 AM12/9/2013 10:48:00 AM