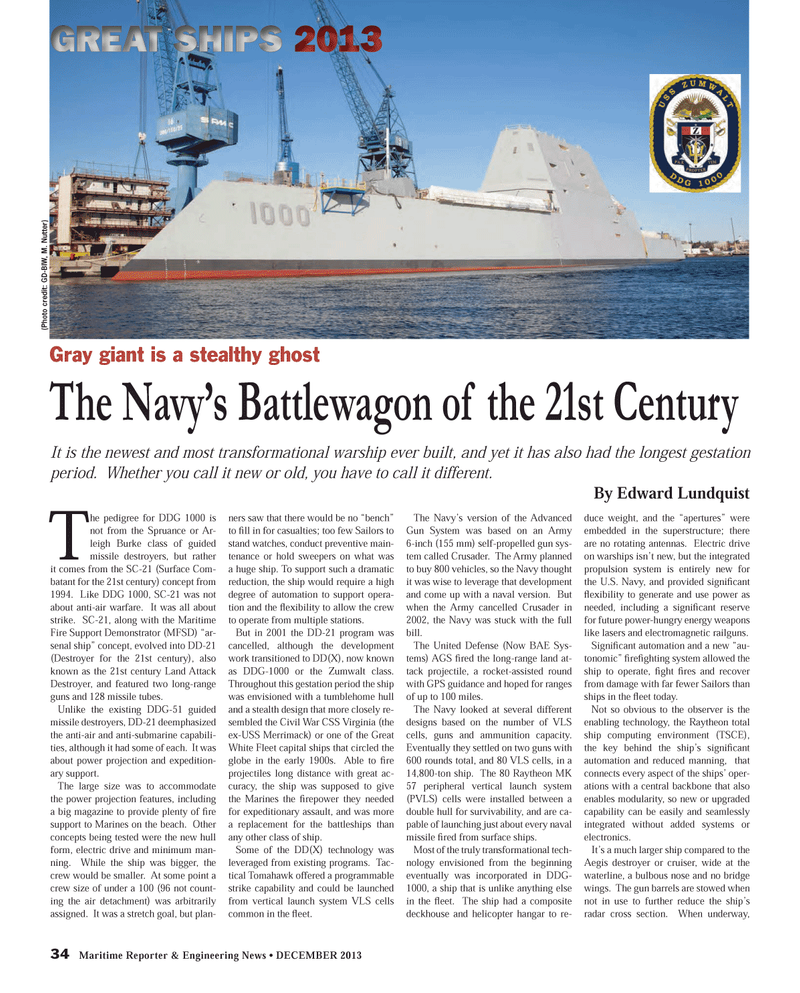 34 Maritime Reporter & Engineering News ? DECEMBER 2013 The pedigree for DDG 1000 is not from the Spruance or Ar- leigh Burke class of guided missile destroyers, but rather it comes from the SC-21 (Surface Com-batant for the 21st century) concept from 1994. Like DDG 1000, SC-21 was not about anti-air warfare. It was all about strike. SC-21, along with the Maritime Fire Support Demonstrator (MFSD) ?ar- senal ship? concept, evolved into DD-21 (Destroyer for the 21st century), also known as the 21st century Land Attack Destroyer, and featured two long-range guns and 128 missile tubes.Unlike the existing DDG-51 guided missile destroyers, DD-21 deemphasized the anti-air and anti-submarine capabili-ties, although it had some of each. It was about power projection and expedition-ary support.The large size was to accommodate the power projection features, including a big magazine to provide plenty of Þ re support to Marines on the beach. Other concepts being tested were the new hull form, electric drive and minimum man-ning. While the ship was bigger, the crew would be smaller. At some point a crew size of under a 100 (96 not count-ing the air detachment) was arbitrarily assigned. It was a stretch goal, but plan-ners saw that there would be no ?bench? to Þ ll in for casualties; too few Sailors to stand watches, conduct preventive main-tenance or hold sweepers on what was a huge ship. To support such a dramatic reduction, the ship would require a high degree of automation to support opera-tion and the ß exibility to allow the crew to operate from multiple stations.But in 2001 the DD-21 program was cancelled, although the development work transitioned to DD(X), now known as DDG-1000 or the Zumwalt class. Throughout this gestation period the ship was envisioned with a tumblehome hull and a stealth design that more closely re-sembled the Civil War CSS Virginia (the ex-USS Merrimack) or one of the Great White Fleet capital ships that circled the globe in the early 1900s. Able to Þ re projectiles long distance with great ac-curacy, the ship was supposed to give the Marines the Þ repower they needed for expeditionary assault, and was more a replacement for the battleships than any other class of ship.Some of the DD(X) technology was leveraged from existing programs. Tac- tical Tomahawk offered a programmable strike capability and could be launched from vertical launch system VLS cells common in the ß eet. The Navy?s version of the Advanced Gun System was based on an Army 6-inch (155 mm) self-propelled gun sys-tem called Crusader. The Army planned to buy 800 vehicles, so the Navy thought it was wise to leverage that development and come up with a naval version. But when the Army cancelled Crusader in 2002, the Navy was stuck with the full bill.The United Defense (Now BAE Sys-tems) AGS Þ red the long-range land at- tack projectile, a rocket-assisted round with GPS guidance and hoped for ranges of up to 100 miles.The Navy looked at several different designs based on the number of VLS cells, guns and ammunition capacity. Eventually they settled on two guns with 600 rounds total, and 80 VLS cells, in a 14,800-ton ship. The 80 Raytheon MK 57 peripheral vertical launch system (PVLS) cells were installed between a double hull for survivability, and are ca- pable of launching just about every naval missile Þ red from surface ships. Most of the truly transformational tech-nology envisioned from the beginning eventually was incorporated in DDG-1000, a ship that is unlike anything else in the ß eet. The ship had a composite deckhouse and helicopter hangar to re-duce weight, and the ?apertures? were embedded in the superstructure; there are no rotating antennas. Electric drive on warships isn?t new, but the integrated propulsion system is entirely new for the U.S. Navy, and provided signi Þ cant ß exibility to generate and use power as needed, including a signiÞ cant reserve for future power-hungry energy weapons like lasers and electromagnetic railguns.SigniÞ cant automation and a new ?au-tonomic? Þ reÞ ghting system allowed the ship to operate, Þ ght Þ res and recover from damage with far fewer Sailors than ships in the ß eet today. Not so obvious to the observer is the enabling technology, the Raytheon total ship computing environment (TSCE), the key behind the ship?s signi Þ cant automation and reduced manning, that connects every aspect of the ships? oper- ations with a central backbone that also enables modularity, so new or upgraded capability can be easily and seamlessly integrated without added systems or electronics. It?s a much larger ship compared to the Aegis destroyer or cruiser, wide at the waterline, a bulbous nose and no bridge wings. The gun barrels are stowed when not in use to further reduce the ship?s radar cross section. When underway, Gray giant is a stealthy ghostThe Navy?s Battlewagon of the 21st Century It is the newest and most transformational warship ever built, and yet it has also had the longest gestation period. Whether you call it new or old, you have to call it different. By Edward Lundquist(Photo credit: GD-BIW, M. Nutter) MR #12 (34-41).indd 34MR #12 (34-41).indd 3412/9/2013 10:46:50 AM12/9/2013 10:46:50 AM