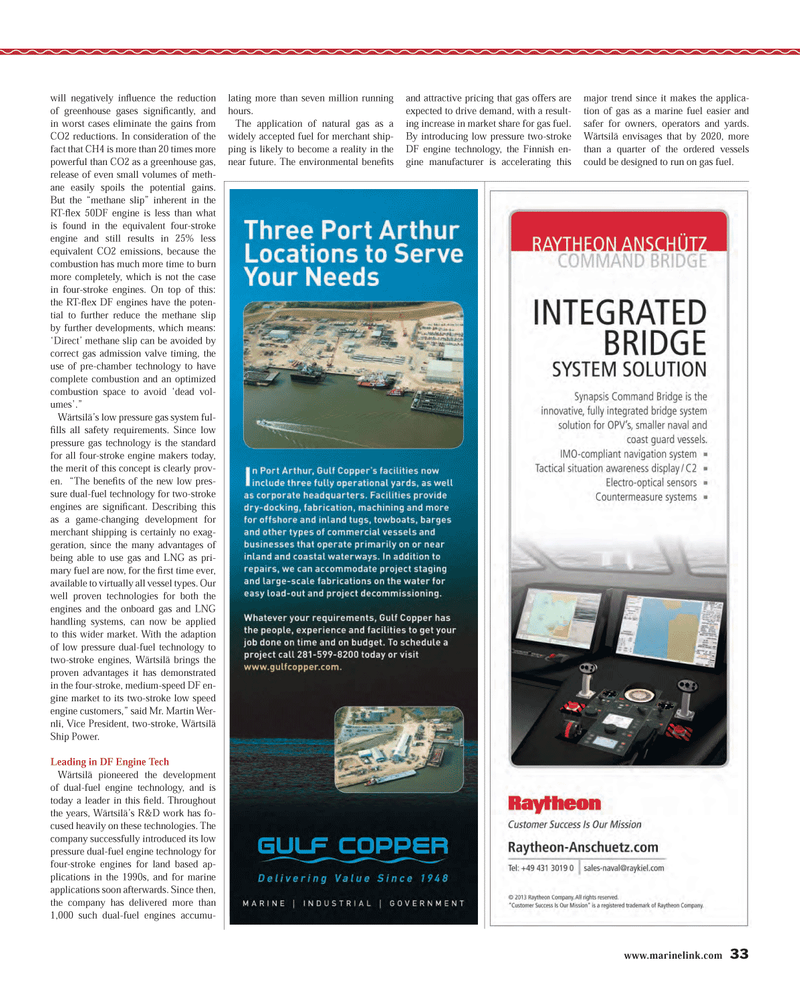 www.marinelink.com 33will negatively inß uence the reduction of greenhouse gases signiÞ cantly, and in worst cases eliminate the gains from CO2 reductions. In consideration of the fact that CH4 is more than 20 times more powerful than CO2 as a greenhouse gas, release of even small volumes of meth-ane easily spoils the potential gains. But the ?methane slip? inherent in the RT- ß ex 50DF engine is less than what is found in the equivalent four-stroke engine and still results in 25% less equivalent CO2 emissions, because the combustion has much more time to burn more completely, which is not the case in four-stroke engines. On top of this: the RT- ß ex DF engines have the poten- tial to further reduce the methane slip by further developments, which means: ?Direct? methane slip can be avoided by correct gas admission valve timing, the use of pre-chamber technology to have complete combustion and an optimized combustion space to avoid ?dead vol-umes?.?Wärtsilä?s low pressure gas system ful- Þ lls all safety requirements. Since low pressure gas technology is the standard for all four-stroke engine makers today, the merit of this concept is clearly prov-en. ?The beneÞ ts of the new low pres- sure dual-fuel technology for two-stroke engines are signiÞ cant. Describing this as a game-changing development for merchant shipping is certainly no exag-geration, since the many advantages of being able to use gas and LNG as pri-mary fuel are now, for the Þ rst time ever, available to virtually all vessel types. Our well proven technologies for both the engines and the onboard gas and LNG handling systems, can now be applied to this wider market. With the adaption of low pressure dual-fuel technology to two-stroke engines, Wärtsilä brings the proven advantages it has demonstrated in the four-stroke, medium-speed DF en- gine market to its two-stroke low speed engine customers,? said Mr. Martin Wer- nli, Vice President, two-stroke, Wärtsilä Ship Power. Leading in DF Engine Tech Wärtsilä pioneered the development of dual-fuel engine technology, and is today a leader in this Þ eld. Throughout the years, Wärtsilä?s R&D work has fo- cused heavily on these technologies. The company successfully introduced its low pressure dual-fuel engine technology for four-stroke engines for land based ap- plications in the 1990s, and for marine applications soon afterwards. Since then, the company has delivered more than 1,000 such dual-fuel engines accumu-lating more than seven million running hours. The application of natural gas as a widely accepted fuel for merchant ship-ping is likely to become a reality in the near future. The environmental bene Þ ts and attractive pricing that gas offers are expected to drive demand, with a result-ing increase in market share for gas fuel. By introducing low pressure two-stroke DF engine technology, the Finnish en- gine manufacturer is accelerating this major trend since it makes the applica-tion of gas as a marine fuel easier and safer for owners, operators and yards. Wärtsilä envisages that by 2020, more than a quarter of the ordered vessels could be designed to run on gas fuel.MR #12 (26-33).indd 33MR #12 (26-33).indd 3312/6/2013 2:56:41 PM12/6/2013 2:56:41 PM