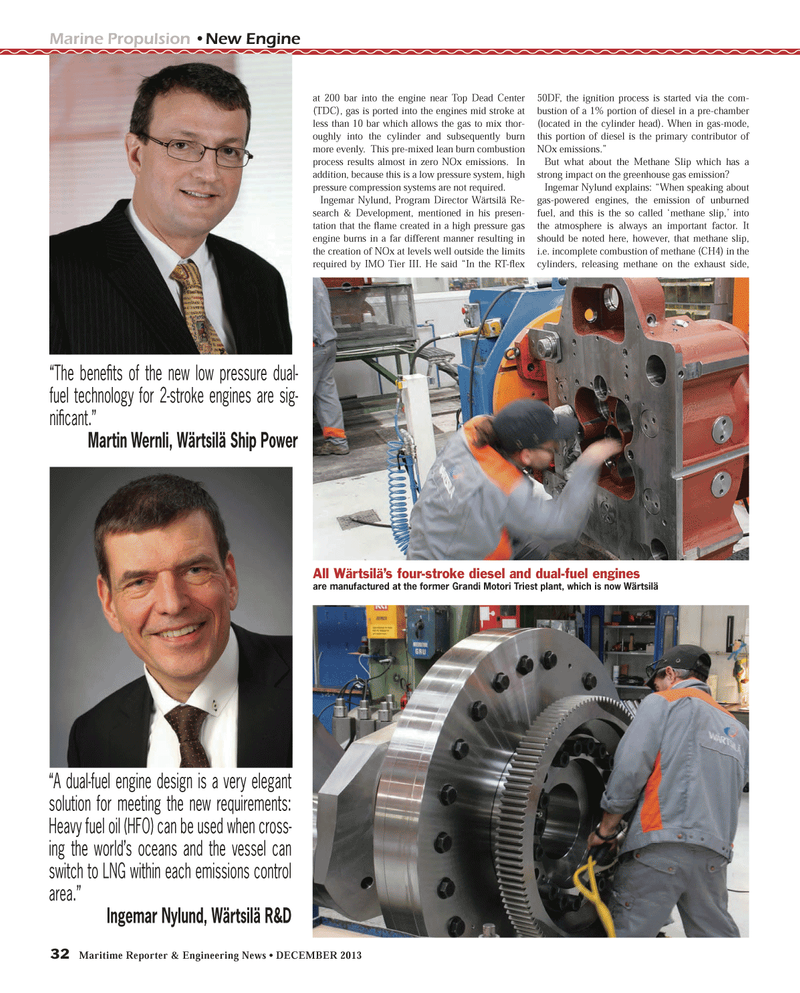 32 Maritime Reporter & Engineering News ? DECEMBER 2013 at 200 bar into the engine near Top Dead Center (TDC), gas is ported into the engines mid stroke at less than 10 bar which allows the gas to mix thor- oughly into the cylinder and subsequently burn more evenly. This pre-mixed lean burn combustion process results almost in zero NOx emissions. In addition, because this is a low pressure system, high pressure compression systems are not required. Ingemar Nylund, Program Director Wärtsilä Re- search & Development, mentioned in his presen-tation that the ß ame created in a high pressure gas engine burns in a far different manner resulting in the creation of NOx at levels well outside the limits required by IMO Tier III. He said ?In the RT- ß ex 50DF, the ignition process is started via the com- bustion of a 1% portion of diesel in a pre-chamber (located in the cylinder head). When in gas-mode, this portion of diesel is the primary contributor of NOx emissions.?But what about the Methane Slip which has a strong impact on the greenhouse gas emission?Ingemar Nylund explains: ?When speaking about gas-powered engines, the emission of unburned fuel, and this is the so called ?methane slip,? into the atmosphere is always an important factor. It should be noted here, however, that methane slip, i.e. incomplete combustion of methane (CH4) in the cylinders, releasing methane on the exhaust side, Marine Propulsion ?New Engine?The bene ts of the new low pressure dual- fuel technology for 2-stroke engines are sig- ni cant.? Martin Wernli, Wärtsilä Ship Power ?A dual-fuel engine design is a very elegant solution for meeting the new requirements: Heavy fuel oil (HFO) can be used when cross- ing the world?s oceans and the vessel can switch to LNG within each emissions control area.? Ingemar Nylund, Wärtsilä R&D All Wärtsilä?s four-stroke diesel and dual-fuel engines are manufactured at the former Grandi Motori Triest plant, which is now Wärtsilä MR #12 (26-33).indd 32MR #12 (26-33).indd 3211/27/2013 2:48:07 PM11/27/2013 2:48:07 PM