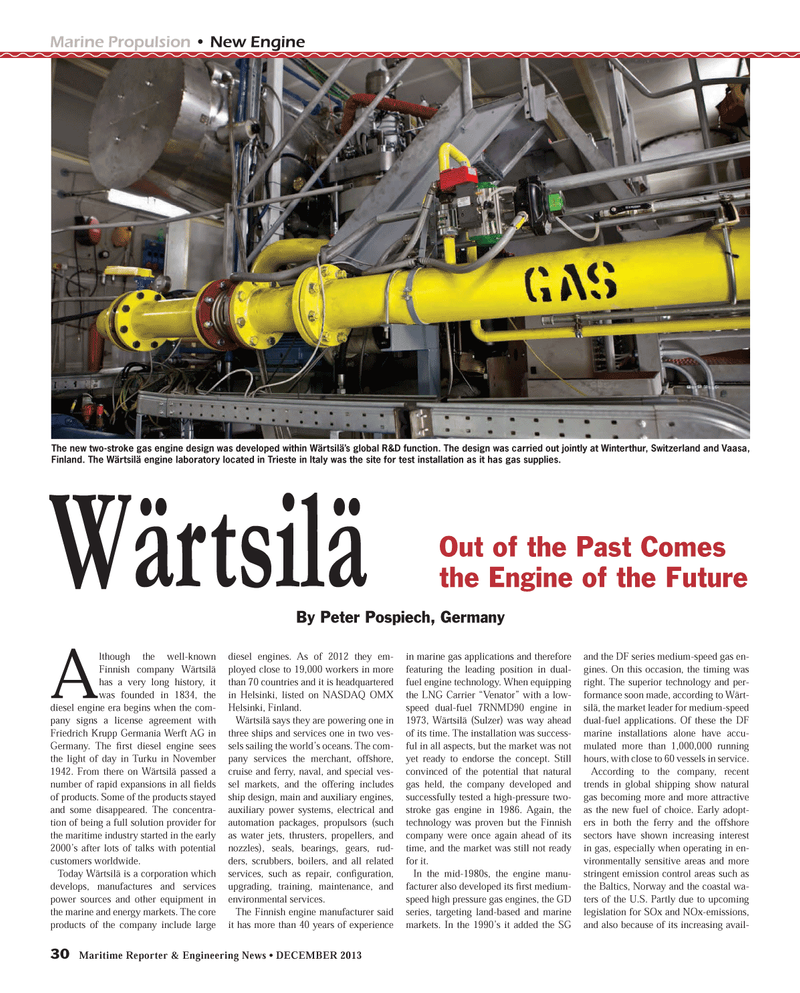 30 Maritime Reporter & Engineering News ? DECEMBER 2013 Marine Propulsion ? New EngineAlthough the well-known Finnish company Wärtsilä has a very long history, it was founded in 1834, the diesel engine era begins when the com-pany signs a license agreement with Friedrich Krupp Germania Werft AG in Germany. The Þ rst diesel engine sees the light of day in Turku in November 1942. From there on Wärtsilä passed a number of rapid expansions in all Þ elds of products. Some of the products stayed and some disappeared. The concentra- tion of being a full solution provider for the maritime industry started in the early 2000?s after lots of talks with potential customers worldwide. Today Wärtsilä is a corporation which develops, manufactures and services power sources and other equipment in the marine and energy markets. The core products of the company include large diesel engines. As of 2012 they em- ployed close to 19,000 workers in more than 70 countries and it is headquartered in Helsinki, listed on NASDAQ OMX Helsinki, Finland.Wärtsilä says they are powering one in three ships and services one in two ves-sels sailing the world?s oceans. The com- pany services the merchant, offshore, cruise and ferry, naval, and special ves- sel markets, and the offering includes ship design, main and auxiliary engines, auxiliary power systems, electrical and automation packages, propulsors (such as water jets, thrusters, propellers, and nozzles), seals, bearings, gears, rud-ders, scrubbers, boilers, and all related services, such as repair, con Þ guration, upgrading, training, maintenance, and environmental services.The Finnish engine manufacturer said it has more than 40 years of experience in marine gas applications and therefore featuring the leading position in dual-fuel engine technology. When equipping the LNG Carrier ?Venator? with a low- speed dual-fuel 7RNMD90 engine in 1973, Wärtsilä (Sulzer) was way ahead of its time. The installation was success- ful in all aspects, but the market was not yet ready to endorse the concept. Still convinced of the potential that natural gas held, the company developed and successfully tested a high-pressure two-stroke gas engine in 1986. Again, the technology was proven but the Finnish company were once again ahead of its time, and the market was still not ready for it.In the mid-1980s, the engine manu-facturer also developed its Þ rst medium- speed high pressure gas engines, the GD series, targeting land-based and marine markets. In the 1990?s it added the SG and the DF series medium-speed gas en-gines. On this occasion, the timing was right. The superior technology and per- formance soon made, according to Wärt- silä, the market leader for medium-speed dual-fuel applications. Of these the DF marine installations alone have accu-mulated more than 1,000,000 running hours, with close to 60 vessels in service.According to the company, recent trends in global shipping show natural gas becoming more and more attractive as the new fuel of choice. Early adopt-ers in both the ferry and the offshore sectors have shown increasing interest in gas, especially when operating in en-vironmentally sensitive areas and more stringent emission control areas such as the Baltics, Norway and the coastal wa-ters of the U.S. Partly due to upcoming legislation for SOx and NOx-emissions, and also because of its increasing avail-Wärtsilä Out of the Past Comes the Engine of the Future By Peter Pospiech, GermanyThe new two-stroke gas engine design was developed within Wärtsilä?s global R&D function. The design was carried out jointly at Winterthur, Switzerland and Vaasa, Finland. The Wärtsilä engine laboratory located in Trieste in Italy was the site for test installation as it has gas supplies. MR #12 (26-33).indd 30MR #12 (26-33).indd 3011/27/2013 2:47:12 PM11/27/2013 2:47:12 PM