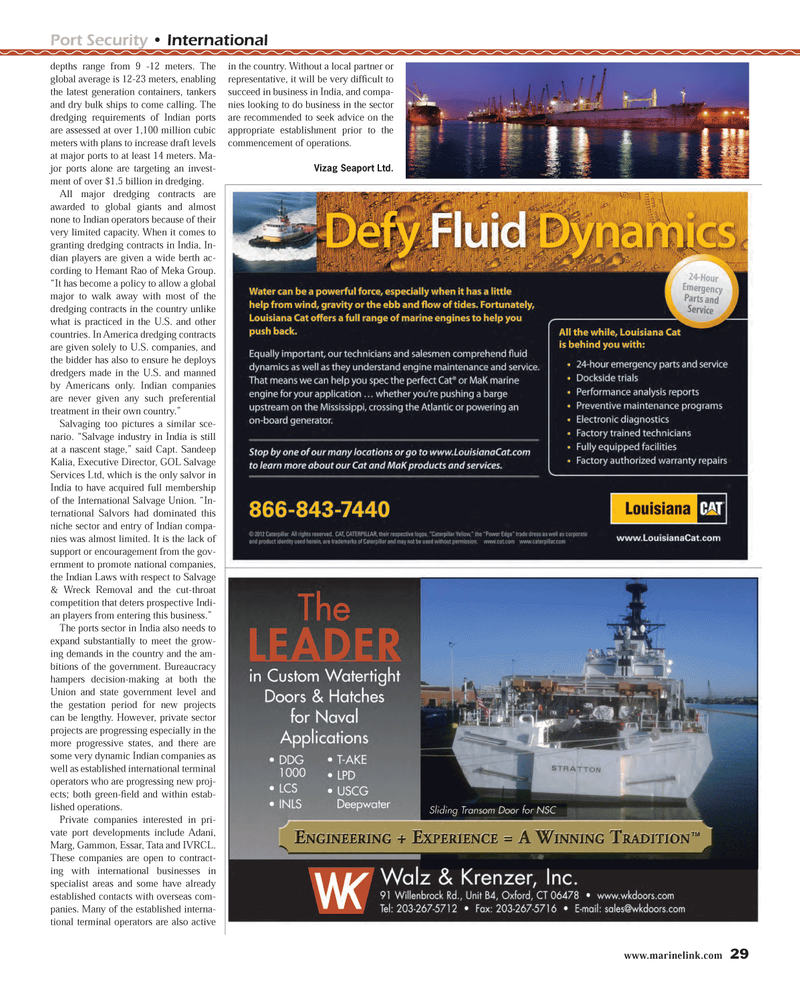 www.marinelink.com 29depths range from 9 -12 meters. The global average is 12-23 meters, enabling the latest generation containers, tankers and dry bulk ships to come calling. The dredging requirements of Indian ports are assessed at over 1,100 million cubic meters with plans to increase draft levels at major ports to at least 14 meters. Ma-jor ports alone are targeting an invest- ment of over $1.5 billion in dredging.All major dredging contracts are awarded to global giants and almost none to Indian operators because of their very limited capacity. When it comes to granting dredging contracts in India, In-dian players are given a wide berth ac-cording to Hemant Rao of Meka Group. ?It has become a policy to allow a global major to walk away with most of the dredging contracts in the country unlike what is practiced in the U.S. and other countries. In America dredging contracts are given solely to U.S. companies, and the bidder has also to ensure he deploys dredgers made in the U.S. and manned by Americans only. Indian companies are never given any such preferential treatment in their own country.? Salvaging too pictures a similar sce-nario. ?Salvage industry in India is still at a nascent stage,? said Capt. Sandeep Kalia, Executive Director, GOL Salvage Services Ltd, which is the only salvor in India to have acquired full membership of the International Salvage Union. ?In-ternational Salvors had dominated this niche sector and entry of Indian compa-nies was almost limited. It is the lack of support or encouragement from the gov-ernment to promote national companies, the Indian Laws with respect to Salvage & Wreck Removal and the cut-throat competition that deters prospective Indi-an players from entering this business.? The ports sector in India also needs to expand substantially to meet the grow-ing demands in the country and the am-bitions of the government. Bureaucracy hampers decision-making at both the Union and state government level and the gestation period for new projects can be lengthy. However, private sector projects are progressing especially in the more progressive states, and there are some very dynamic Indian companies as well as established international terminal operators who are progressing new proj-ects; both green-Þ eld and within estab- lished operations. Private companies interested in pri-vate port developments include Adani, Marg, Gammon, Essar, Tata and IVRCL. These companies are open to contract-ing with international businesses in specialist areas and some have already established contacts with overseas com-panies. Many of the established interna-tional terminal operators are also active in the country. Without a local partner or representative, it will be very difÞ cult to succeed in business in India, and compa-nies looking to do business in the sector are recommended to seek advice on the appropriate establishment prior to the commencement of operations. Vizag Seaport Ltd. Port Security ? InternationalMR #12 (26-33).indd 29MR #12 (26-33).indd 2912/6/2013 9:55:06 AM12/6/2013 9:55:06 AM