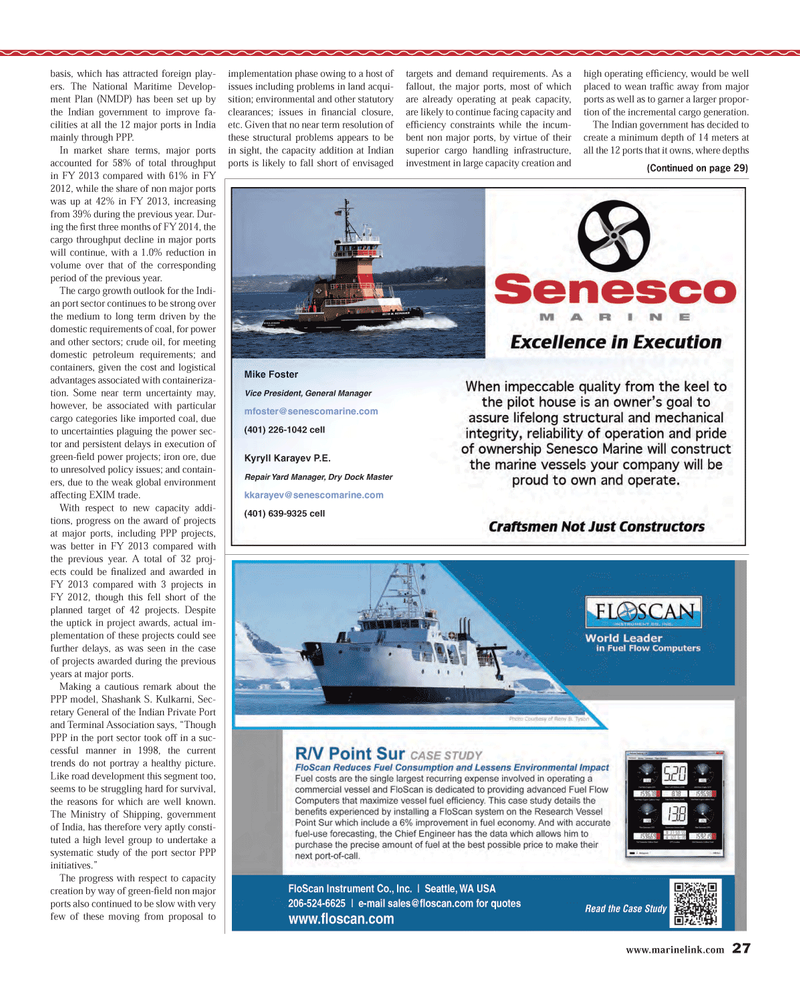 basis, which has attracted foreign play-ers. The National Maritime Develop- ment Plan (NMDP) has been set up by the Indian government to improve fa-cilities at all the 12 major ports in India mainly through PPP. In market share terms, major ports accounted for 58% of total throughput in FY 2013 compared with 61% in FY 2012, while the share of non major ports was up at 42% in FY 2013, increasing from 39% during the previous year. Dur- ing the Þ rst three months of FY 2014, the cargo throughput decline in major ports will continue, with a 1.0% reduction in volume over that of the corresponding period of the previous year. The cargo growth outlook for the Indi- an port sector continues to be strong over the medium to long term driven by the domestic requirements of coal, for power and other sectors; crude oil, for meeting domestic petroleum requirements; and containers, given the cost and logistical advantages associated with containeriza-tion. Some near term uncertainty may, however, be associated with particular cargo categories like imported coal, due to uncertainties plaguing the power sec-tor and persistent delays in execution of green-Þ eld power projects; iron ore, due to unresolved policy issues; and contain-ers, due to the weak global environment affecting EXIM trade. With respect to new capacity addi- tions, progress on the award of projects at major ports, including PPP projects, was better in FY 2013 compared with the previous year. A total of 32 proj- ects could be Þ nalized and awarded in FY 2013 compared with 3 projects in FY 2012, though this fell short of the planned target of 42 projects. Despite the uptick in project awards, actual im-plementation of these projects could see further delays, as was seen in the case of projects awarded during the previous years at major ports. Making a cautious remark about the PPP model, Shashank S. Kulkarni, Sec- retary General of the Indian Private Port and Terminal Association says, ?Though PPP in the port sector took off in a suc- cessful manner in 1998, the current trends do not portray a healthy picture. Like road development this segment too, seems to be struggling hard for survival, the reasons for which are well known. The Ministry of Shipping, government of India, has therefore very aptly consti-tuted a high level group to undertake a systematic study of the port sector PPP initiatives.? The progress with respect to capacity creation by way of green-Þ eld non major ports also continued to be slow with very few of these moving from proposal to implementation phase owing to a host of issues including problems in land acqui-sition; environmental and other statutory clearances; issues in Þ nancial closure, etc. Given that no near term resolution of these structural problems appears to be in sight, the capacity addition at Indian ports is likely to fall short of envisaged targets and demand requirements. As a fallout, the major ports, most of which are already operating at peak capacity, are likely to continue facing capacity and efÞ ciency constraints while the incum- bent non major ports, by virtue of their superior cargo handling infrastructure, investment in large capacity creation and high operating efÞ ciency, would be well placed to wean trafÞ c away from major ports as well as to garner a larger propor- tion of the incremental cargo generation. The Indian government has decided to create a minimum depth of 14 meters at all the 12 ports that it owns, where depths )OR6FDQ,QVWUXPHQW&R,QF_6HDWWOH:$86$ _HPDLOVDOHV#IORVFDQFRPIRUTXRWHV Read the Case StudyZZZIORVFDQFRP www.marinelink.com 27Mike Foster Vice President, General Manager mfoster@senescomarine.com (401) 226-1042 cellKyryll Karayev P.E. Repair Yard Manager, Dry Dock Master kkarayev@senescomarine.com (401) 639-9325 cellSenesco MR Jan14.indd 111/19/2013 11:59:46 AM(Continued on page 29)MR #12 (26-33).indd 27MR #12 (26-33).indd 2711/27/2013 2:44:42 PM11/27/2013 2:44:42 PM