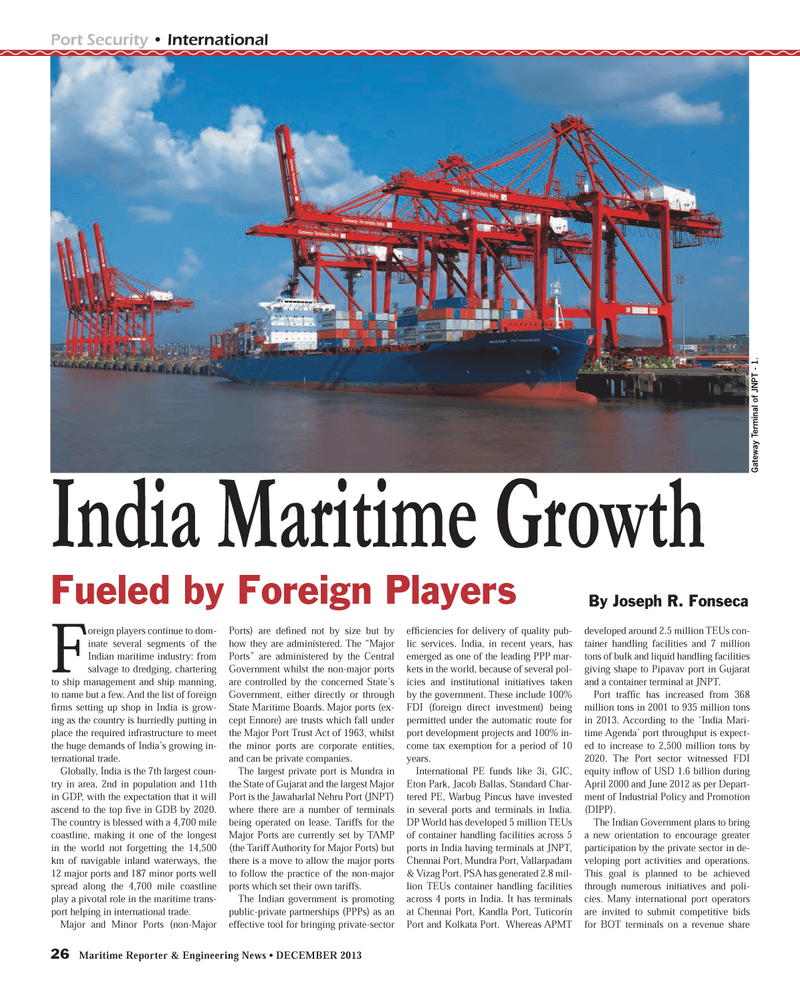 26 Maritime Reporter & Engineering News ? DECEMBER 2013 Foreign players continue to dom-inate several segments of the Indian maritime industry: from salvage to dredging, chartering to ship management and ship manning, to name but a few. And the list of foreign Þ rms setting up shop in India is grow- ing as the country is hurriedly putting in place the required infrastructure to meet the huge demands of India?s growing in- ternational trade. Globally, India is the 7th largest coun- try in area, 2nd in population and 11th in GDP, with the expectation that it will ascend to the top Þ ve in GDB by 2020. The country is blessed with a 4,700 mile coastline, making it one of the longest in the world not forgetting the 14,500 km of navigable inland waterways, the 12 major ports and 187 minor ports well spread along the 4,700 mile coastline play a pivotal role in the maritime trans-port helping in international trade. Major and Minor Ports (non-Major Ports) are deÞ ned not by size but by how they are administered. The ?Major Ports? are administered by the Central Government whilst the non-major ports are controlled by the concerned State?s Government, either directly or through State Maritime Boards. Major ports (ex-cept Ennore) are trusts which fall under the Major Port Trust Act of 1963, whilst the minor ports are corporate entities, and can be private companies. The largest private port is Mundra in the State of Gujarat and the largest Major Port is the Jawaharlal Nehru Port (JNPT) where there are a number of terminals being operated on lease. Tariffs for the Major Ports are currently set by TAMP (the Tariff Authority for Major Ports) but there is a move to allow the major ports to follow the practice of the non-major ports which set their own tariffs. The Indian government is promoting public-private partnerships (PPPs) as an effective tool for bringing private-sector efÞ ciencies for delivery of quality pub- lic services. India, in recent years, has emerged as one of the leading PPP mar- kets in the world, because of several pol-icies and institutional initiatives taken by the government. These include 100% FDI (foreign direct investment) being permitted under the automatic route for port development projects and 100% in-come tax exemption for a period of 10 years.International PE funds like 3i, GIC, Eton Park, Jacob Ballas, Standard Char- tered PE, Warbug Pincus have invested in several ports and terminals in India. DP World has developed 5 million TEUs of container handling facilities across 5 ports in India having terminals at JNPT, Chennai Port, Mundra Port, Vallarpadam & Vizag Port. PSA has generated 2.8 mil- lion TEUs container handling facilities across 4 ports in India. It has terminals at Chennai Port, Kandla Port, Tuticorin Port and Kolkata Port. Whereas APMT developed around 2.5 million TEUs con- tainer handling facilities and 7 million tons of bulk and liquid handling facilities giving shape to Pipavav port in Gujarat and a container terminal at JNPT. Port trafÞ c has increased from 368 million tons in 2001 to 935 million tons in 2013. According to the ?India Mari- time Agenda? port throughput is expect- ed to increase to 2,500 million tons by 2020. The Port sector witnessed FDI equity inß ow of USD 1.6 billion during April 2000 and June 2012 as per Depart-ment of Industrial Policy and Promotion (DIPP).The Indian Government plans to bring a new orientation to encourage greater participation by the private sector in de-veloping port activities and operations. This goal is planned to be achieved through numerous initiatives and poli-cies. Many international port operators are invited to submit competitive bids for BOT terminals on a revenue share Port Security ? InternationalIndia Maritime Growth Fueled by Foreign Players By Joseph R. FonsecaGateway Terminal of JNPT - 1. MR #12 (26-33).indd 26MR #12 (26-33).indd 2611/27/2013 2:44:11 PM11/27/2013 2:44:11 PM