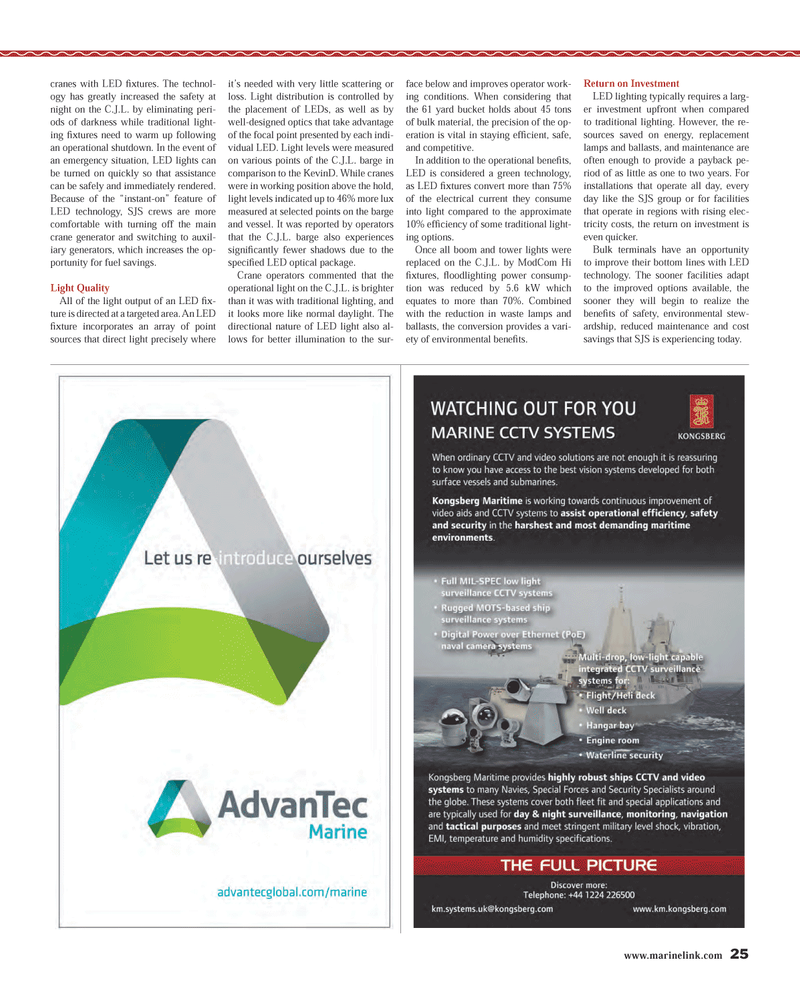 www.marinelink.com 25cranes with LED Þ xtures. The technol- ogy has greatly increased the safety at night on the C.J.L. by eliminating peri-ods of darkness while traditional light-ing Þ xtures need to warm up following an operational shutdown. In the event of an emergency situation, LED lights can be turned on quickly so that assistance can be safely and immediately rendered. Because of the ?instant-on? feature of LED technology, SJS crews are more comfortable with turning off the main crane generator and switching to auxil-iary generators, which increases the op-portunity for fuel savings. Light QualityAll of the light output of an LED Þ x-ture is directed at a targeted area. An LED Þ xture incorporates an array of point sources that direct light precisely where it?s needed with very little scattering or loss. Light distribution is controlled by the placement of LEDs, as well as by well-designed optics that take advantage of the focal point presented by each indi-vidual LED. Light levels were measured on various points of the C.J.L. barge in comparison to the KevinD. While cranes were in working position above the hold, light levels indicated up to 46% more lux measured at selected points on the barge and vessel. It was reported by operators that the C.J.L. barge also experiences signiÞ cantly fewer shadows due to the speciÞ ed LED optical package. Crane operators commented that the operational light on the C.J.L. is brighter than it was with traditional lighting, and it looks more like normal daylight. The directional nature of LED light also al-lows for better illumination to the sur- face below and improves operator work-ing conditions. When considering that the 61 yard bucket holds about 45 tons of bulk material, the precision of the op-eration is vital in staying efÞ cient, safe, and competitive. In addition to the operational beneÞ ts, LED is considered a green technology, as LED Þ xtures convert more than 75% of the electrical current they consume into light compared to the approximate 10% efÞ ciency of some traditional light- ing options. Once all boom and tower lights were replaced on the C.J.L. by ModCom Hi Þ xtures, ß oodlighting power consump- tion was reduced by 5.6 kW which equates to more than 70%. Combined with the reduction in waste lamps and ballasts, the conversion provides a vari-ety of environmental beneÞ ts.Return on InvestmentLED lighting typically requires a larg- er investment upfront when compared to traditional lighting. However, the re-sources saved on energy, replacement lamps and ballasts, and maintenance are often enough to provide a payback pe-riod of as little as one to two years. For installations that operate all day, every day like the SJS group or for facilities that operate in regions with rising elec-tricity costs, the return on investment is even quicker. Bulk terminals have an opportunity to improve their bottom lines with LED technology. The sooner facilities adapt to the improved options available, the sooner they will begin to realize the beneÞ ts of safety, environmental stew- ardship, reduced maintenance and cost savings that SJS is experiencing today. MR #12 (18-25).indd 25MR #12 (18-25).indd 2512/9/2013 9:23:48 AM12/9/2013 9:23:48 AM