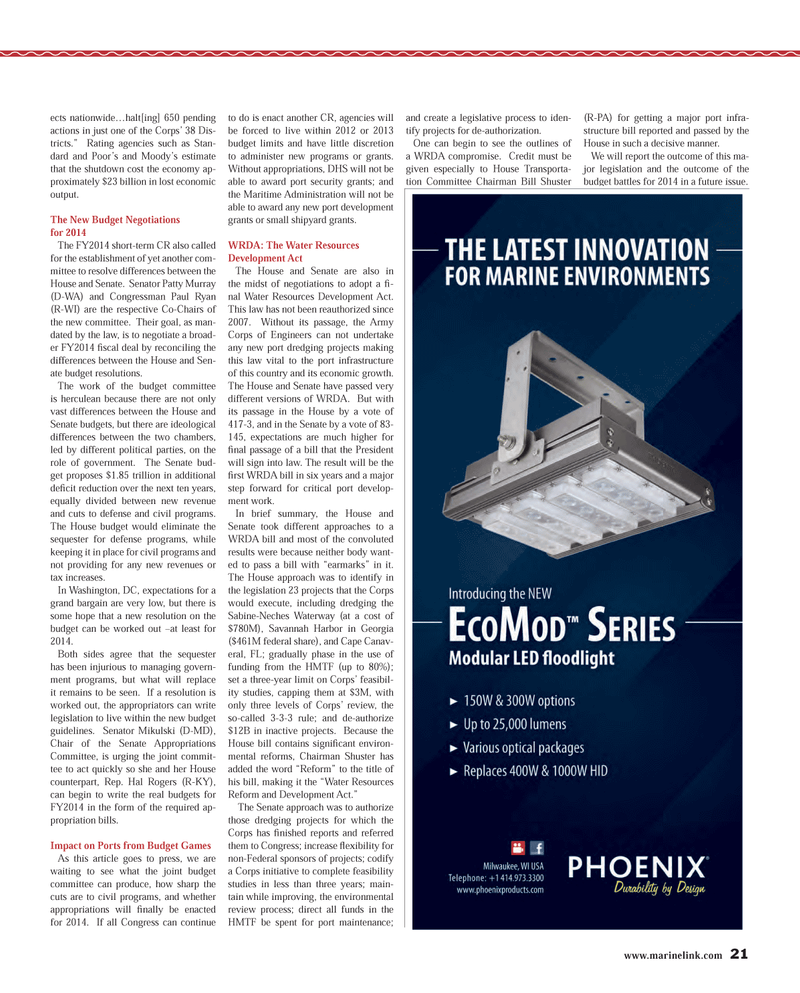 www.marinelink.com 21ects nationwide?halt[ing] 650 pending actions in just one of the Corps? 38 Dis- tricts.? Rating agencies such as Stan-dard and Poor?s and Moody?s estimate that the shutdown cost the economy ap-proximately $23 billion in lost economic output. The New Budget Negotiations for 2014 The FY2014 short-term CR also called for the establishment of yet another com-mittee to resolve differences between the House and Senate. Senator Patty Murray (D-WA) and Congressman Paul Ryan (R-WI) are the respective Co-Chairs of the new committee. Their goal, as man- dated by the law, is to negotiate a broad- er FY2014 Þ scal deal by reconciling the differences between the House and Sen- ate budget resolutions. The work of the budget committee is herculean because there are not only vast differences between the House and Senate budgets, but there are ideological differences between the two chambers, led by different political parties, on the role of government. The Senate bud- get proposes $1.85 trillion in additional deÞ cit reduction over the next ten years, equally divided between new revenue and cuts to defense and civil programs. The House budget would eliminate the sequester for defense programs, while keeping it in place for civil programs and not providing for any new revenues or tax increases. In Washington, DC, expectations for a grand bargain are very low, but there is some hope that a new resolution on the budget can be worked out ?at least for 2014. Both sides agree that the sequester has been injurious to managing govern-ment programs, but what will replace it remains to be seen. If a resolution is worked out, the appropriators can write legislation to live within the new budget guidelines. Senator Mikulski (D-MD), Chair of the Senate Appropriations Committee, is urging the joint commit- tee to act quickly so she and her House counterpart, Rep. Hal Rogers (R-KY), can begin to write the real budgets for FY2014 in the form of the required ap-propriation bills. Impact on Ports from Budget Games As this article goes to press, we are waiting to see what the joint budget committee can produce, how sharp the cuts are to civil programs, and whether appropriations will Þ nally be enacted for 2014. If all Congress can continue to do is enact another CR, agencies will be forced to live within 2012 or 2013 budget limits and have little discretion to administer new programs or grants. Without appropriations, DHS will not be able to award port security grants; and the Maritime Administration will not be able to award any new port development grants or small shipyard grants.WRDA: The Water Resources Development ActThe House and Senate are also in the midst of negotiations to adopt a Þ -nal W ater Resources Development Act. This law has not been reauthorized since 2007. Without its passage, the Army Corps of Engineers can not undertake any new port dredging projects making this law vital to the port infrastructure of this country and its economic growth. The House and Senate have passed very different versions of WRDA. But with its passage in the House by a vote of 417-3, and in the Senate by a vote of 83-145, expectations are much higher for Þ nal passage of a bill that the President will sign into law. The result will be the Þ rst WRDA bill in six years and a major step forward for critical port develop-ment work. In brief summary, the House and Senate took different approaches to a WRDA bill and most of the convoluted results were because neither body want-ed to pass a bill with ?earmarks? in it. The House approach was to identify in the legislation 23 projects that the Corps would execute, including dredging the Sabine-Neches Waterway (at a cost of $780M), Savannah Harbor in Georgia ($461M federal share), and Cape Canav-eral, FL; gradually phase in the use of funding from the HMTF (up to 80%); set a three-year limit on Corps? feasibil- ity studies, capping them at $3M, with only three levels of Corps? review, the so-called 3-3-3 rule; and de-authorize $12B in inactive projects. Because the House bill contains signiÞ cant environ- mental reforms, Chairman Shuster has added the word ?Reform? to the title of his bill, making it the ?Water Resources Reform and Development Act.? The Senate approach was to authorize those dredging projects for which the Corps has Þ nished reports and referred them to Congress; increase ß exibility for non-Federal sponsors of projects; codify a Corps initiative to complete feasibility studies in less than three years; main-tain while improving, the environmental review process; direct all funds in the HMTF be spent for port maintenance; and create a legislative process to iden-tify projects for de-authorization. One can begin to see the outlines of a WRDA compromise. Credit must be given especially to House Transporta- tion Committee Chairman Bill Shuster (R-PA) for getting a major port infra- structure bill reported and passed by the House in such a decisive manner. We will report the outcome of this ma- jor legislation and the outcome of the budget battles for 2014 in a future issue. MR #12 (18-25).indd 21MR #12 (18-25).indd 2111/27/2013 2:40:20 PM11/27/2013 2:40:20 PM