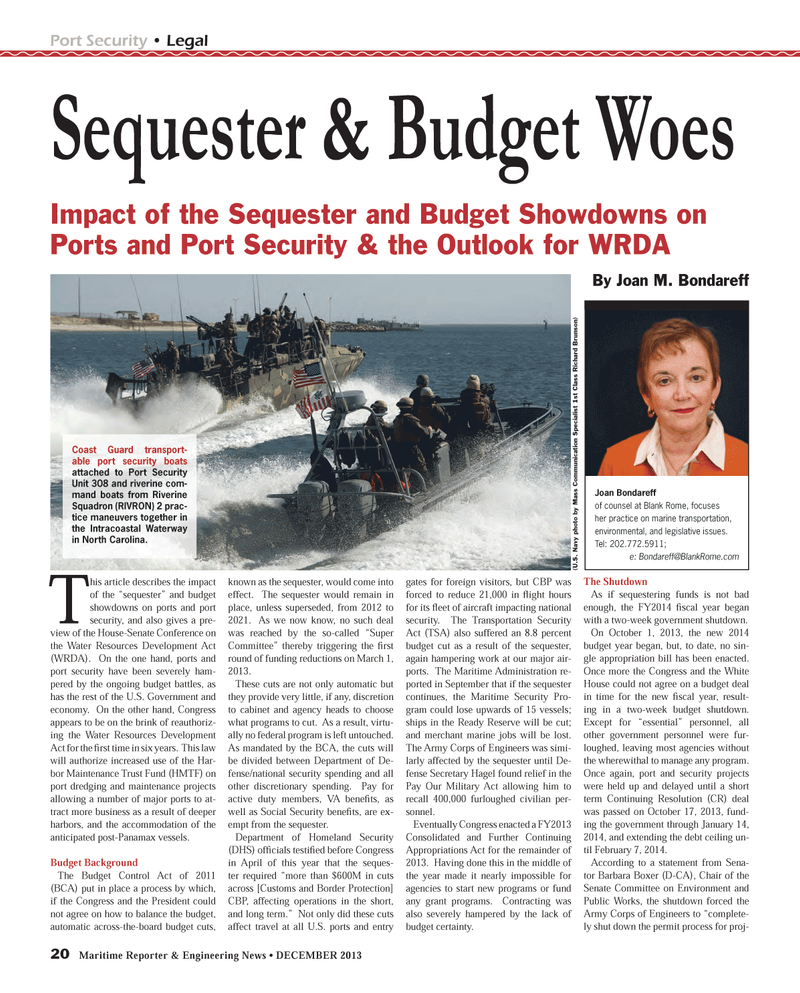 20 Maritime Reporter & Engineering News ? DECEMBER 2013 This article describes the impact of the ?sequester? and budget showdowns on ports and port security, and also gives a pre- view of the House-Senate Conference on the Water Resources Development Act (WRDA). On the one hand, ports and port security have been severely ham-pered by the ongoing budget battles, as has the rest of the U.S. Government and economy. On the other hand, Congress appears to be on the brink of reauthoriz-ing the Water Resources Development Act for the Þ rst time in six years. This law will authorize increased use of the Har- bor Maintenance Trust Fund (HMTF) on port dredging and maintenance projects allowing a number of major ports to at-tract more business as a result of deeper harbors, and the accommodation of the anticipated post-Panamax vessels. Budget Background The Budget Control Act of 2011 (BCA) put in place a process by which, if the Congress and the President could not agree on how to balance the budget, automatic across-the-board budget cuts, known as the sequester, would come into effect. The sequester would remain in place, unless superseded, from 2012 to 2021. As we now know, no such deal was reached by the so-called ?Super Committee? thereby triggering the Þ rst round of funding reductions on March 1, 2013. These cuts are not only automatic but they provide very little, if any, discretion to cabinet and agency heads to choose what programs to cut. As a result, virtu- ally no federal program is left untouched. As mandated by the BCA, the cuts will be divided between Department of De-fense/national security spending and all other discretionary spending. Pay for active duty members, VA bene Þ ts, as well as Social Security beneÞ ts, are ex- empt from the sequester. Department of Homeland Security (DHS) ofÞ cials testi Þ ed before Congress in April of this year that the seques- ter required ?more than $600M in cuts across [Customs and Border Protection] CBP, affecting operations in the short, and long term.? Not only did these cuts affect travel at all U.S. ports and entry gates for foreign visitors, but CBP was forced to reduce 21,000 in ß ight hours for its ß eet of aircraft impacting national security. The Transportation Security Act (TSA) also suffered an 8.8 percent budget cut as a result of the sequester, again hampering work at our major air- ports. The Maritime Administration re- ported in September that if the sequester continues, the Maritime Security Pro-gram could lose upwards of 15 vessels; ships in the Ready Reserve will be cut; and merchant marine jobs will be lost. The Army Corps of Engineers was simi- larly affected by the sequester until De- fense Secretary Hagel found relief in the Pay Our Military Act allowing him to recall 400,000 furloughed civilian per- sonnel. Eventually Congress enacted a FY2013 Consolidated and Further Continuing Appropriations Act for the remainder of 2013. Having done this in the middle of the year made it nearly impossible for agencies to start new programs or fund any grant programs. Contracting was also severely hampered by the lack of budget certainty. The ShutdownAs if sequestering funds is not bad enough, the FY2014 Þ scal year began with a two-week government shutdown.On October 1, 2013, the new 2014 budget year began, but, to date, no sin-gle appropriation bill has been enacted. Once more the Congress and the White House could not agree on a budget deal in time for the new Þ scal year, result- ing in a two-week budget shutdown. Except for ?essential? personnel, all other government personnel were fur- loughed, leaving most agencies without the wherewithal to manage any program. Once again, port and security projects were held up and delayed until a short term Continuing Resolution (CR) deal was passed on October 17, 2013, fund-ing the government through January 14, 2014, and extending the debt ceiling un-til February 7, 2014. According to a statement from Sena-tor Barbara Boxer (D-CA), Chair of the Senate Committee on Environment and Public Works, the shutdown forced the Army Corps of Engineers to ?complete-ly shut down the permit process for proj-(U.S. Navy photo by Mass Communication Specialist 1st Class Richard Brunson) Port Security ? LegalSequester & Budget Woes By Joan M. Bondareff Impact of the Sequester and Budget Showdowns on Ports and Port Security & the Outlook for WRDAJoan Bondareff of counsel at Blank Rome, focuses her practice on marine transportation, environmental, and legislative issues. Tel: 202.772.5911; e: Bondareff@BlankRome.com Coast Guard transport- able port security boats attached to Port Security Unit 308 and riverine com-mand boats from Riverine Squadron (RIVRON) 2 prac-tice maneuvers together in the Intracoastal Waterway in North Carolina. MR #12 (18-25).indd 20MR #12 (18-25).indd 2011/27/2013 2:40:03 PM11/27/2013 2:40:03 PM