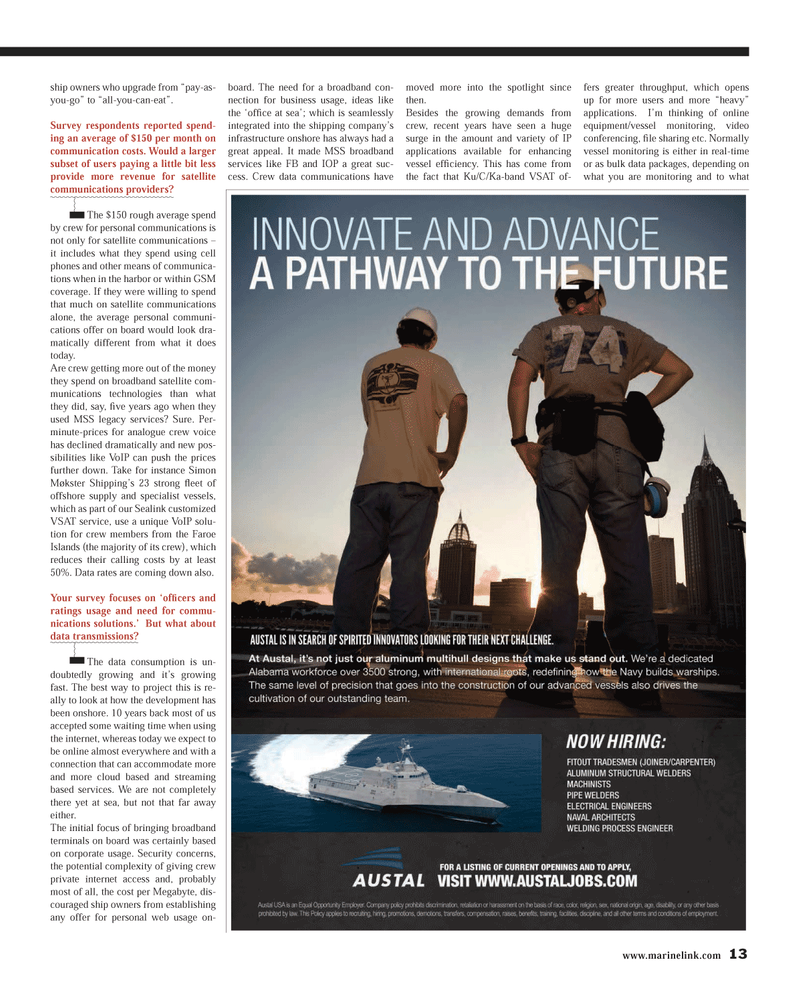 www.marinelink.com 13ship owners who upgrade from ?pay-as-you-go? to ?all-you-can-eat?.Survey respondents reported spend- ing an average of $150 per month on communication costs. Would a larger subset of users paying a little bit less provide more revenue for satellite communications providers? The $150 rough average spend by crew for personal communications is not only for satellite communications ? it includes what they spend using cell phones and other means of communica-tions when in the harbor or within GSM coverage. If they were willing to spend that much on satellite communications alone, the average personal communi-cations offer on board would look dra- matically different from what it does today. Are crew getting more out of the money they spend on broadband satellite com-munications technologies than what they did, say, Þ ve years ago when they used MSS legacy services? Sure. Per- minute-prices for analogue crew voice has declined dramatically and new pos-sibilities like VoIP can push the prices further down. Take for instance Simon Møkster Shipping?s 23 strong ß eet of offshore supply and specialist vessels, which as part of our Sealink customized VSAT service, use a unique VoIP solu- tion for crew members from the Faroe Islands (the majority of its crew), which reduces their calling costs by at least 50%. Data rates are coming down also. Your survey focuses on ?of Þ cers and ratings usage and need for commu- nications solutions.? But what about data transmissions? The data consumption is un- doubtedly growing and it?s growing fast. The best way to project this is re- ally to look at how the development has been onshore. 10 years back most of us accepted some waiting time when using the internet, whereas today we expect to be online almost everywhere and with a connection that can accommodate more and more cloud based and streaming based services. We are not completely there yet at sea, but not that far away either. The initial focus of bringing broadband terminals on board was certainly based on corporate usage. Security concerns, the potential complexity of giving crew private internet access and, probably most of all, the cost per Megabyte, dis-couraged ship owners from establishing any offer for personal web usage on- board. The need for a broadband con- nection for business usage, ideas like the ?ofÞ ce at sea?; which is seamlessly integrated into the shipping company?s infrastructure onshore has always had a great appeal. It made MSS broadband services like FB and IOP a great suc- cess. Crew data communications have moved more into the spotlight since then. Besides the growing demands from crew, recent years have seen a huge surge in the amount and variety of IP applications available for enhancing vessel efÞ ciency. This has come from the fact that Ku/C/Ka-band VSAT of- fers greater throughput, which opens up for more users and more ?heavy? applications. I?m thinking of online equipment/vessel monitoring, video conferencing, Þ le sharing etc. Normally vessel monitoring is either in real-time or as bulk data packages, depending on what you are monitoring and to what MR #12 (10-17).indd 13MR #12 (10-17).indd 1312/3/2013 1:07:45 PM12/3/2013 1:07:45 PM