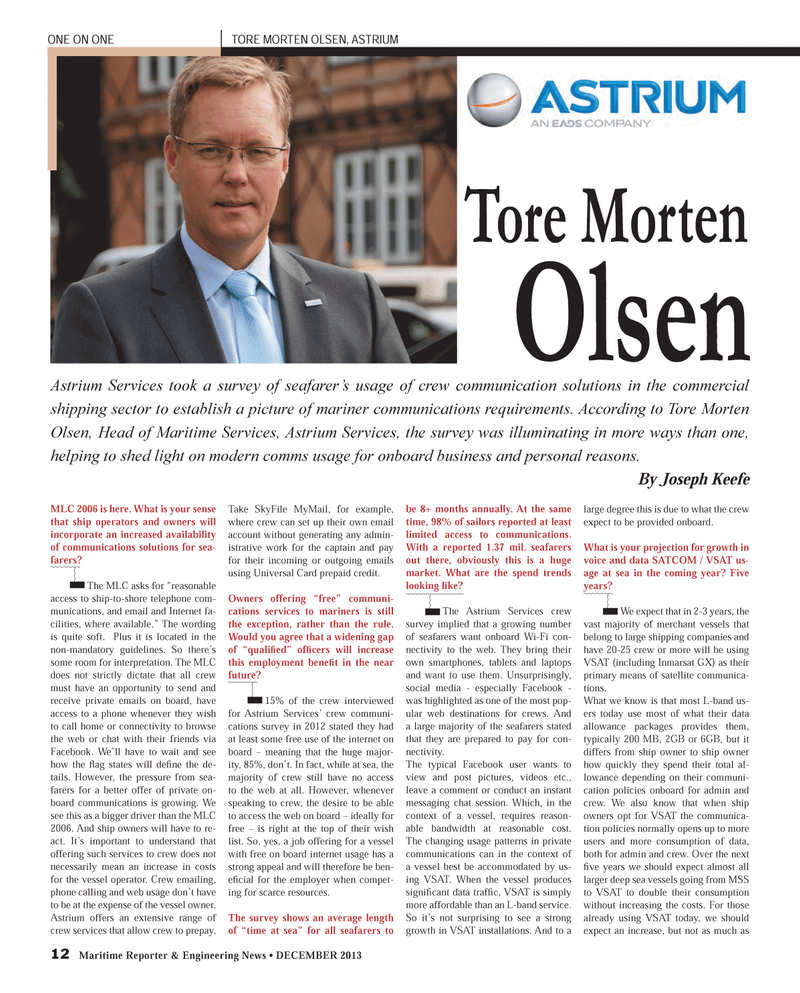 12 Maritime Reporter & Engineering News ? DECEMBER 2013 ONE ON ONE TORE MORTEN OLSEN, ASTRIUM MLC 2006 is here. What is your sense that ship operators and owners will incorporate an increased availability of communications solutions for sea- farers? The MLC asks for ?reasonable access to ship-to-shore telephone com-munications, and email and Internet fa-cilities, where available.? The wording is quite soft. Plus it is located in the non-mandatory guidelines. So there?s some room for interpretation. The MLC does not strictly dictate that all crew must have an opportunity to send and receive private emails on board, have access to a phone whenever they wish to call home or connectivity to browse the web or chat with their friends via Facebook. We?ll have to wait and see how the ß ag states will de Þ ne the de- tails. However, the pressure from sea- farers for a better offer of private on- board communications is growing. We see this as a bigger driver than the MLC 2006. And ship owners will have to re- act. It?s important to understand that offering such services to crew does not necessarily mean an increase in costs for the vessel operator. Crew emailing, phone calling and web usage don?t have to be at the expense of the vessel owner. Astrium offers an extensive range of crew services that allow crew to prepay. Take SkyFile MyMail, for example, where crew can set up their own email account without generating any admin-istrative work for the captain and pay for their incoming or outgoing emails using Universal Card prepaid credit.Owners offering ?free? communi- cations services to mariners is still the exception, rather than the rule. Would you agree that a widening gap of ?qualiÞ ed? of Þ cers will increase this employment beneÞ t in the near future? 15% of the crew interviewed for Astrium Services? crew communi-cations survey in 2012 stated they had at least some free use of the internet on board ? meaning that the huge major- ity, 85%, don?t. In fact, while at sea, the majority of crew still have no access to the web at all. However, whenever speaking to crew, the desire to be able to access the web on board ? ideally for free ? is right at the top of their wish list. So, yes, a job offering for a vessel with free on board internet usage has a strong appeal and will therefore be ben-eÞ cial for the employer when compet- ing for scarce resources.The survey shows an average length of ?time at sea? for all seafar ers to be 8+ months annually. At the same time, 98% of sailors reported at least limited access to communications. With a reported 1.37 mil. seafarers out there, obviously this is a huge market. What are the spend trends looking like? The Astrium Services crew survey implied that a growing number of seafarers want onboard Wi-Fi con- nectivity to the web. They bring their own smartphones, tablets and laptops and want to use them. Unsurprisingly, social media - especially Facebook - was highlighted as one of the most pop-ular web destinations for crews. And a large majority of the seafarers stated that they are prepared to pay for con-nectivity. The typical Facebook user wants to view and post pictures, videos etc., leave a comment or conduct an instant messaging chat session. Which, in the context of a vessel, requires reason-able bandwidth at reasonable cost. The changing usage patterns in private communications can in the context of a vessel best be accommodated by us-ing VSAT. When the vessel produces signiÞ cant data traf Þ c, VSAT is simply more affordable than an L-band service. So it?s not surprising to see a strong growth in VSAT installations. And to a large degree this is due to what the crew expect to be provided onboard.What is your projection for growth in voice and data SATCOM / VSAT us- age at sea in the coming year? Five years? We expect that in 2-3 years, the vast majority of merchant vessels that belong to large shipping companies and have 20-25 crew or more will be using VSAT (including Inmarsat GX) as their primary means of satellite communica-tions.What we know is that most L-band us-ers today use most of what their data allowance packages provides them, typically 200 MB, 2GB or 6GB, but it differs from ship owner to ship owner how quickly they spend their total al-lowance depending on their communi-cation policies onboard for admin and crew. We also know that when ship owners opt for VSAT the communica- tion policies normally opens up to more users and more consumption of data, both for admin and crew. Over the next Þ ve years we should expect almost all larger deep sea vessels going from MSS to VSAT to double their consumption without increasing the costs. For those already using VSAT today, we should expect an increase, but not as much as Astrium Services took a survey of seafarer?s usage of crew communication solutions in the commercial shipping sector to establish a picture of mariner communications requirements. According to Tore Morten Olsen, Head of Maritime Services, Astrium Services, the survey was illuminating in more ways than one, helping to shed light on modern comms usage for onboard business and personal reasons. By Joseph KeefeTore Morten Olsen MR #12 (10-17).indd 12MR #12 (10-17).indd 1211/27/2013 2:28:07 PM11/27/2013 2:28:07 PM