The Ties that Bind

This month the M/V Karl Senner and the M/V Dickie Gonsoulin will be christened in Houma, La. While the event is centered on a pair of new, high-specification towboats, the celebration is the culmination of more than 45 years of business partnerships between Karl Senner, LLC and LeBeouf Bros. Towing.

A Strong Start
The partnership forged by Senner and Gonsoulin and extended today by their two sons, Ralph Senner and Jon Gonsoulin, all started in 1967 aboard the M/V Mary R, which was a single screw tugboat  purchased by LeBeouf Brothers Towing after its incorporation in 1944. Mary R was originally powered with an Atlas six-cylinder, 160 hp engine. In 1955, the vessel was repowered with an Enterprise 6 cylinder inline “M” engine rated 400 hp at 800 rpm. Mary R sank in 1957, and after the vessel was recovered from the waters of Texas City harbor, it was refurbished and placed back into service.
In 1967, Karl Senner sold his first Reintjes gearbox for installation in the United States to LeBeouf Brothers towing.
The Reintjes WAV 721 gearbox was installed in the Mary R for use with the Enterprise 6 cylinder inline “M” engine. The Mary R operated successfully with no major repairs to the Reintjes gearbox from date of installation until the vessel was taken out of service in December 1981.
According to Jon Gonsoulin, President, LeBeouf Bros. Towing LLC, after the vessel was decommissioned “we pulled the gearbox out and gave it back to Karl Senner as a momento. They cleaned  it up, polished it and put it on display at the Workboat show.”
Ralph Senner said that the gearbox eventually was sent back to Germany for display at Reintjes, but that it will be back in the U.S. at the double christening, which was planned for September 14, 2013.
This boat will be the first ever to bear the name M/V Karl Senner, an honor that Gonsoulin said is appropriate. “Considering that Mr. Karl and dad were very dear friends for all of these years, it’s a befitting time with the delivery of sister boats to have them both be named in their honor.”

Changing with the Times
While Karl Senner LLC still is a private, family run business, and maintains much of the same character and principle upon which it was founded, it has been undergoing a transformation of sorts, with the ascension last year of Ralph Senner as the company’s leader and the naming of Steve Valdes as CFO.
Just last month the company opened a new training facility on its premisis, a facility which is intially aimed at training and maintaining its own staff, but eventually intended to accomodate training needs for its customers as well.
“Finding quality trained personnel that can live the lifestyle of a service technician is challenge in our business,” Ralph Senner said, noting that this was a driver to develop its own training center. The new training center, combined with expansion of its facilities Paducah, Ky. and Houston and buoyant business in nearly all of the sectors it serves, has the company running at full speed. But the business, as always, comes with fresh challenge.
One of the main challenges today is consolidation, the loss of small privtely held companies which are being bought by capital groups or public companies. “Publicly traded companies are not looking to the future as much as privately held companies like Jon’s, which are willing to spend a little more money upfront because they wanted to know what that asset would be worth 10, 15 years from now,” Ralph Senner said. “Some companies are looking to see how much money they can make now, getting that asset to work as quickly as they can, as cheaply as they can.”
Gonsoulin agrees, noting that he is willing to spend more money upfront, for example to build barges with thicker steel plate, or to invest an extra $25k in a heavier duty gear, with the assumption that the investment in quality will pay off in the long run with less downtime and trips to the reapir yard.
“Having your own yard allows you a lot of flexibility,” Gonsoulin said. “It might cost a bit more in the short term, but in the long term, building yourself, building it better to your spec, it makes a lot of sense to me to build it stronger from the beginning.”
Jon is third-generation in the business, and he said the decision was made to start building its own boats in 2005 in the wake of hurricane Katrina, when a local shipyard who had bid on one of their jobs essentially said they could not bid the project.
“It was December 23, 2005, and that lit a fire under me to build my own equipment. I started building my own tank barges. The first two barges were delivered in Q1 2008, and we’re about to launch barge 537, so we’ve built 37 barges between 2008 and now.”
The M/V Karl Senner and the M/V Dickie Gonsoulin are the second and third of a five boat series, all 95 x 34 ft., though the Karl will have Mitsubishi power and the Dickie Caterpillar 3512s. All, naturally, will have Reintjes gears.
“The relationship (with Senner) goes back to my father and Mr. Karl,” said Gonsoulin. “We became friends and business partners quite a few years ago. We don’t exclusively have Karl Senner supplied Reintjes gears, but that’s usually because of boats we bought that had other gears in them. But if we build new or repower,  we go exclusively with Reintjes gearboxes.”
Gonsoulin said the quality of the product is important, but more so the after sales service that has cemented the relationship with Senner.  With the waterways being unpredictable, problems may arise unexpectedly, and when they do, resolving them efficiently and effectively is critical to the bottom line.
“It’s all about trust and service,” Gonsoulin said. “If we ever have a problem, these guys do a wonderful job as they get things done and the boats going for us.
They have swing gears sitting on the floor us, to get our boat operating again quickly. If it wasn’t for their willingness to have a spare sitting on the floor for us in New Orleans, to have  that money sitting on the floor, we would be down for the count (with a failure). We either would have had to wait for another unit from Germany or we would have had to install another gear.”
According to Senner the company currently maintains approximately $14m in spare parts, and the main challenge is simply knowing which spares to stock. While many companies may eschew having that much capital tied up in parts, Senner sees it as a central plank to its business model. “We conduct an annual evaluation of the equipment we have running to give us a good indication of where we need to invest (in spares). But really, it simply comes down to communicating with the customers.” 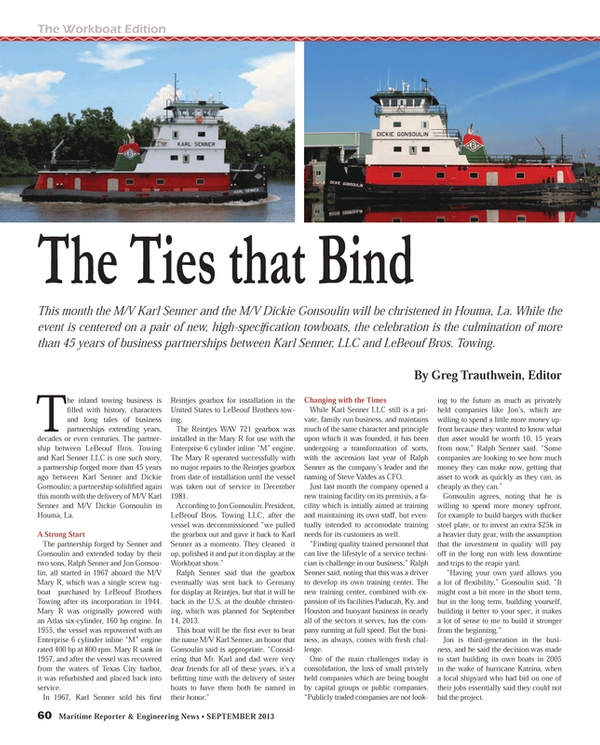 Read The Ties that Bind in Pdf, Flash or Html5 edition of September 2013 Maritime Reporter