While the Chinese shipbuilding industry is exhibiting expertise across a widening range of ship types and sizes, it is also taking care to enhance its technical competitiveness in the most populous categories of mercantile trader. As a microcosm of the whole, New Century Shipbuilding of Jianjiang is producing an export series of cargo-optimized Bulkers in the Handymax category at some 56,000-dwt. Victoria Steamship adopted and modified a type developed by the Shanghai Merchant Ship Design and Research Institute (SDARI), to achieve a B-60 load designation. The original design was a 'B' freeboard ship.

"Discussions with both SDARI and Lloyd's Register Asia paved the way toward an upgrade which improved carrying capacity by adding a poop deck and adjusting the hold lengths to minimize deck immersion in the event of flooding of the holds and adjacent tanks," reported LR. The B-60 designation is regarded as a striking achievement considering that only Panamax and Capesize Bulkers qualify under the 1966 Load Line Convention, as a result of their greater number of holds and their shorter hold lengths, typically of 25- to 26-m. With hold lengths of 29- to 30-m, a Handymax potentially has a more severe problem if its forward hold becomes flooded, since this cargo space is bigger in relative scale than that of a Panamax or Capesize. The 56,000-dwt design has been adopted for six vessels for Victoria Steamship and two for Halcoussis at New Century, while a further two such Bulkers have been contracted by Pacific Basin from Xiamen Shipyard. 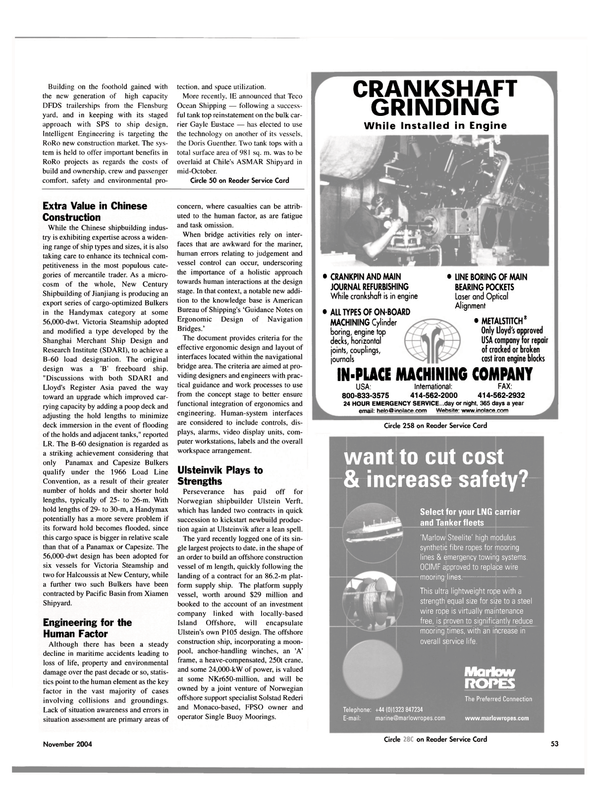 Other stories from November 2004 issue