Containerships: When Will One Engine Not Be Enough?

There is certainly no let-up yet in the containership ordering spree as charter rates scale new heights, carriers continue to report record results. The Howe Robinson Container Charter Index has climbed to a new record of 1588.4. up by just over 252% since its January 2002 low point of 451. Records are being broken on a weekly basis as liner companies extend their investment programs, ordering new and ever larger ships many of which will not now deliver until 2007 or 2008.

Among leading lines believed to be contracting or at least discussing new tonnage in recent days are CMA CGM.

Evergreen, Mitsui OSK and Orient Overseas Container Line. The French line is believed to have ordered another four panamax vessels at Hyundai Heavy Industries whilst Orient Overseas is thought to have booked four 4300 teu units at Samsung in Korea. Meanwhile Evergreen is reported to be in discussions with various Far Eastern builders including China Shipbuilding and Mitsubishi Heavy Industries about possible new tonnage and is also considering increasing the size of some eight vessels it already has on order at Samsung. According to newbuilding statistics, both Mediterranean Shipping Company (MSC) and China Shipping have 9.200 TEU ships on order: MSC has nine such units under construction at Samsung, with delivery dates extending between August next year and April 2007 while China Shipping has three 9200 teu ships due to deliver in 2006 and five 9,580 TEU vessels scheduled to be commissioned during the first half of 2007, all from Samsung.

However, as container ships become larger and faster and newbuilding prices continue to rise, there is concern amongst some analysts about their economics.

Ultimately the quest for economies of scale will come to a dead end. they reason, as the largest vessels will only be able to call on a handful of megaports with appropriate back-up infrastructure. In the same way, the owners of such vessels would have only a handful of ship repair facilities to choose from and presumably such yards could charge for their services accordingly.

Already some construction yards are working on designs for vessels in the 10-12,000 teu range and some designers are even talking of s o - c a l l e d "Malacca-max" units that could have double the capacity of some of the largest container units under construction today. So far as the economics are concerned, there are issues both afloat and ashore.

Under the present construction standards of ISO containers, for example, it is not safe to load more than nine high and therefore giant container carriers must become broader and/or longer.

This has an impact on maneuverability in access channels as well as berth space in the terminals themselves.

Meanwhile the issue of propulsion units, the required diameter of propellers and the threat of cavitation become critical factors. Today's largest vessels are approaching the power limits of single engines driving single propellers. If container vessels get much larger, they will have to have twin propulsion units driving twin propellers and, although faster, there will be a price to pay both in terms of first cost and fuel consumption over a ship's lifetime.

Perhaps the most worrying aspect of today's container boom, however, is the fact that ships are already subject to some delays as congested ports in some areas simply cannot cope. And with the fleet expanding at the current rate, observers are worried that port hold-ups will simply get worse. That makes shipping less efficient, leads to longer transit times and ultimately drives up costs. 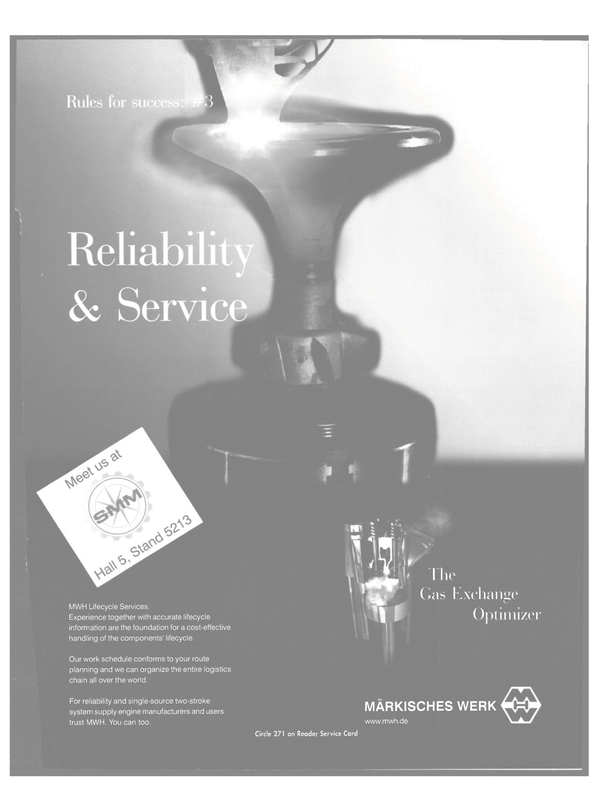 Read Containerships: When Will One Engine Not Be Enough? in Pdf, Flash or Html5 edition of September 2004 Maritime Reporter