"It is exciting to see our vessels coming and going through the harbor. I particularly enjoy that fact that we appear to be one of the busiest, and best looking fleets on the water," says Island Tug and Barge Ltd. President Bob Shields of the view from his harbor side office in Vancouver, BC. Capt. Shields has built a reputation as an innovator in an innovative British Columbia towboating market.

This reputation was enhanced last year when Shields and his partner, Capt Jack Davies, retrofitted an Intercon connector to their 41.5 by 9.8-m, 3,000- hp twin-screw tug Island Monarch.

The 23.7 x 7.3-m Island Crown is one of those distinctively Canadian tugs whose raised focsle design resulted from a requirement that all crews' quarters must be above the waterline. Built in 1974 to a Robert Allan design, she was first Christened the Gulf Julia. Later, renamed the Seaspan Defender she has more than earned her keep over the past three decades towing along the Pacific coast. But this was a well designed and well built boat and her owners felt secure in doing a routine repower to extend her life. An old pair of 725 hp engines pulled out and replaced with the new Cummins KTA38M0 engines. The new engines have been de-rated to 500 hp each at 1,600 rpm but are designed capable of 800 hp each at 1,800 rpm.

The existing Twin Disc TD540 7:1 marine gears were sent out for rebuilding and were reinstalled. The threeblade propellers in nozzles were kept to their original 74 x 78-in. dimensions.

"We had Robert Allan Ltd. do a complete engineering study for us on the repowering and were amazed to discover that the propellers were an absolute perfect match for the two ratings of the Cummins engines," Shields said. "We didn't do a bollard pull test, but believe we are getting slightly better performance than prior to the re-power. We estimate the bollard pull at 36,500 lbs at the 500 hp rating and 57,750 lbs at the 800 hp rating." While the engine selection and preparation was a detailed and intense process, the actual lowering of the two 9,000 pound engines was accomplished in a solid morning of work. A well-coordinated team that worked with a rented crane to lower the machinery through a hatch in the top of the fiddley. The engines, lifted with a specially designed jig, were stood on their head to fit through the hatch with inches to spare. The gears followed and were mated to the engines and shafts. 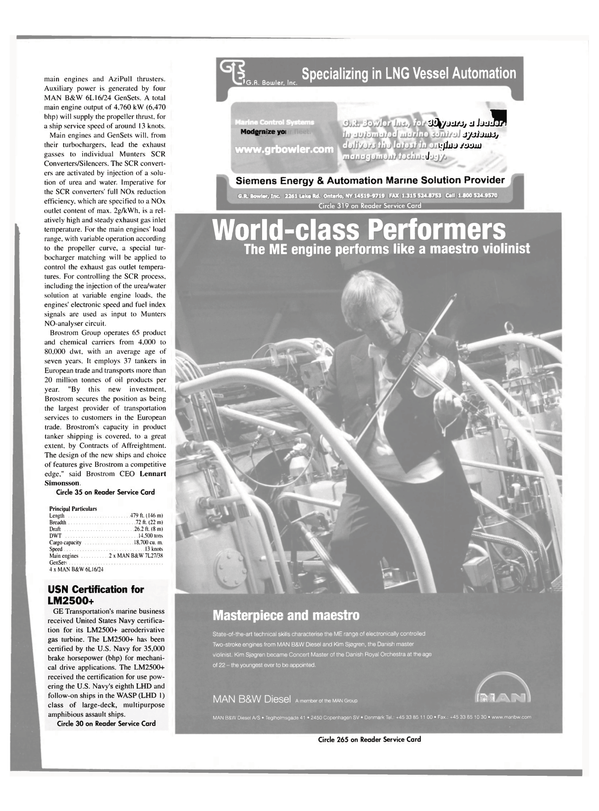