The first half of 2003, under the watchful eye of Capt Vanderperre, Chairman of Univan has Univan Ship Management's fleet grow to in excess of 80 ships under full technical management.

The growth has come from bulk carriers and two VLCCs (belonging to Fred Cheng/Shinyo International) and container ships, where Univan is well known for its unique expertise and dedicated technical and crewing pool.

As of June 30, Univan's fleet stood at 78 (up five from end 2002) and by end August an additional five ships will have been delivered to Univan, taking the fleet well into the 80s.

"Univan's dedication to technical expertise and its policy of having dedicated teams .. from management to crews .. for different class vessels .. is clearly the way to grow in the future," according to Capt. Vanderperre.

"It is especially pleasing to have added two more VLCCs to the fleet and the support of an experienced tanker operator such as Fred Cheng's Shinyo Group bodes well for the company's future," he said.

In the tanker sector, the company now has four VLCCs, two Aframax, six product and two chemical tankers under full technical management, 45 container vessels, four car and some 20 bulk carriers and multi-purpose cargo ships. On behalf of the Shinyo Group, Univan has also taken on the newbuilding supervision for three Panamax vessels at the Oshima Shipyard in Japan. 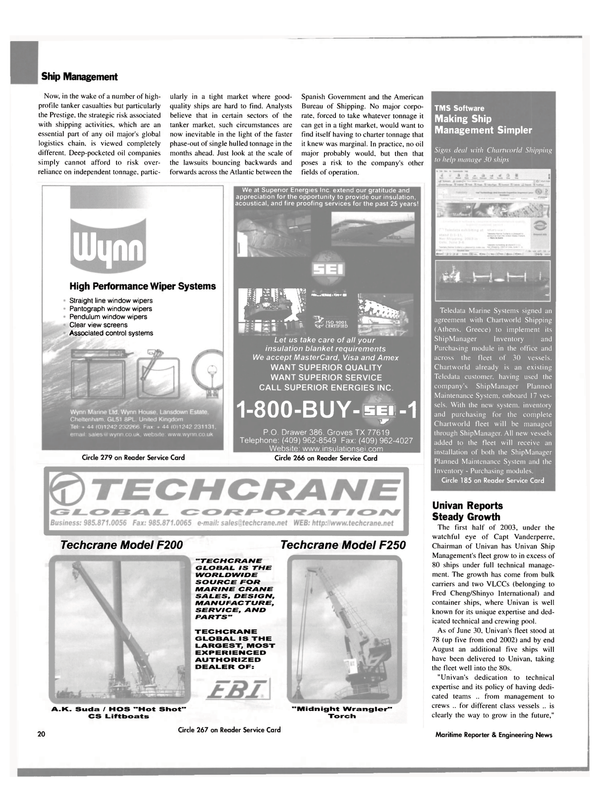