Stepping Out in Oslo

The Nor-Shipping Exhibition concluded June 6, 2003. Following were some of the major announcements during the week in Oslo.

Kongsberg won a contract for the control systems for four LNG tankers scheduled to be built in Japan. The ships will carry LNG from the Snohvit field to the U.S., Spain and France. Two of the ships are being built for Hoegh shipping lines at Mitsubishi Shipyards, while the other two are being built at the Mitsui and Kawasaki shipyards. Kelvin Hughes was awarded type approval for its ECDIS-based Track Control System.

This is the first Approval of its type to be granted by LR and covers the integration of the company's ECDIS and Autopilot products into a system meeting the new IEC 62065 track control performance standard. The massive new ferry for Color Line, a 74,600-gt ship under construction at Kvaerner Masa- Yard's T\irku New Shipyard, will feature RoRo access equipment and passenger elevators from MacGregor.

MAN B&W announced that Hapag Lloyd has placed an order for three 12K98ME engines to power their latest large containership. The ME engines each have an output of 68,640 kW (93,360 bhp). Each ME engine will power the massive 1,099 x 141-ft. (335 x 43-m), 8,145-TEU containerships, which are being built at Hyundai Shipyard in Korea. On its stand at Norshipping McMurdo was featuring a number of products, including the joint McMurdo/Transas UAIS. The MT-1 meets the mandatory Class A carriage requirement, and incorporates the latest state-of-the-art technology with a touch screen minimum keyboard and display.

Northrop Grumman Corporation's Sperry Marine announced that its Decca BridgeMaster E marine radars have been type accepted by QinetiQ for display of Automatic Identification System (AIS) data in accordance with the technical provisions of the International Maritime Organization Circular SN/Circ. 217. Orkot TLM marine bearings have approvals from all main classification societies for use as rudder bearings and water lubricated stern tube bearings. Orkot is typically approved for 10, or even 15 N/mm-cu.

Rolls-Royce and Furuno have agreed to cooperate in the marketing and sup- ply of Integrated Bridge Systems to the commercial maritime market. Based on Furuno IBS products in Rolls-Royce ship systems and the use of Rolls-Royce Automation and Control products, the companies will develop jointly elements of the IBS to improve information flow and to provide operator benefits with improved man-machine interfacing.

According to Rick Kane, president, Rolls-Royce Marine Electrical Systems, the effort will start in the offshore business and evolve globally. Saab Transponder Tech strengthened its distribution network when it signed an agreement with Radio Holland Group for worldwide distribution and service for the SOLAS class A transponders.

Saab also announced the start of cooperation with Seagull A/S from Horten, Norway to develop a CBT module for AIS that will be provided with each delivery of our R4 AIS Transponder.

It was announced by Unitor that Hull 588/1, a 39,500-dwt chemical tanker being built in Poland for Odfjell ASA, is equipped with the largest nitrogen gen generator that Unitor has ever delivered.

Based on IGS membrane technology, the system can deliver up to 3,750-cu.

m. of nitrogen/hr. Germany's Voith has developed an optimized Voith- Schneider-Propeller (VSP) for Platform Supply Vessels (PSV). The company has designed and tested at the model basin Marintek a new unit with improved blades for optimum free running efficiency.

Vacon Pic of Finland introduced a series of completely modular AC drives for marine applications. Used for stepless speed control of asynchronous motors, the new Vacon NX series includes both air and liquid cooled units within the power range of 0.2 kW to 3 MW. The new Vacon NX frequency converters are based on a completely modular design with separate control and power sections and easily customized software. Benefits y are the high cooling efficiency of up to 95 percent, and a space savings of up to 80 percent. Wynn Marine unveiled its Series 5010 Window Wash System — for both newbuild and retrofit projects.

It was designed to compliment Wynn's existing range, and is designed as a compact off-the-shelf module. 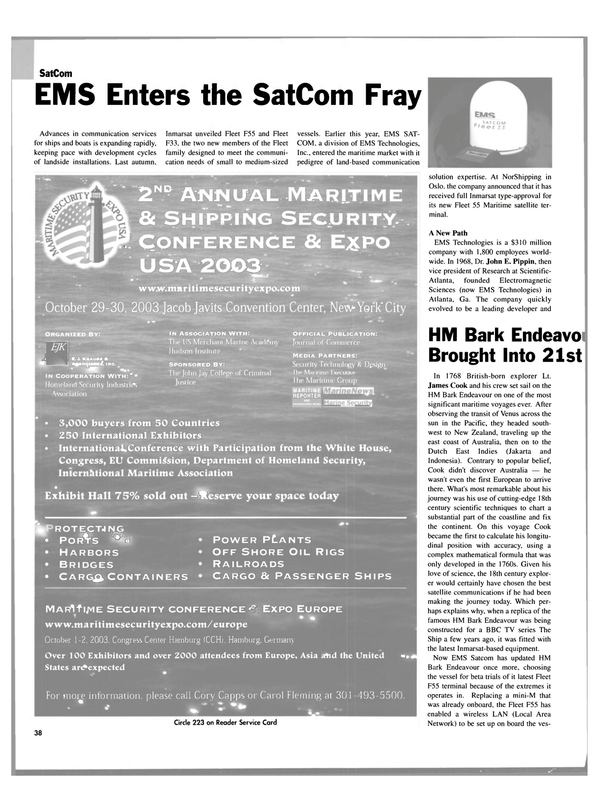 Read Stepping Out in Oslo in Pdf, Flash or Html5 edition of July 2003 Maritime Reporter