Read this page in Pdf, Flash or Html5 edition of May 2003 Maritime Reporter Magazine 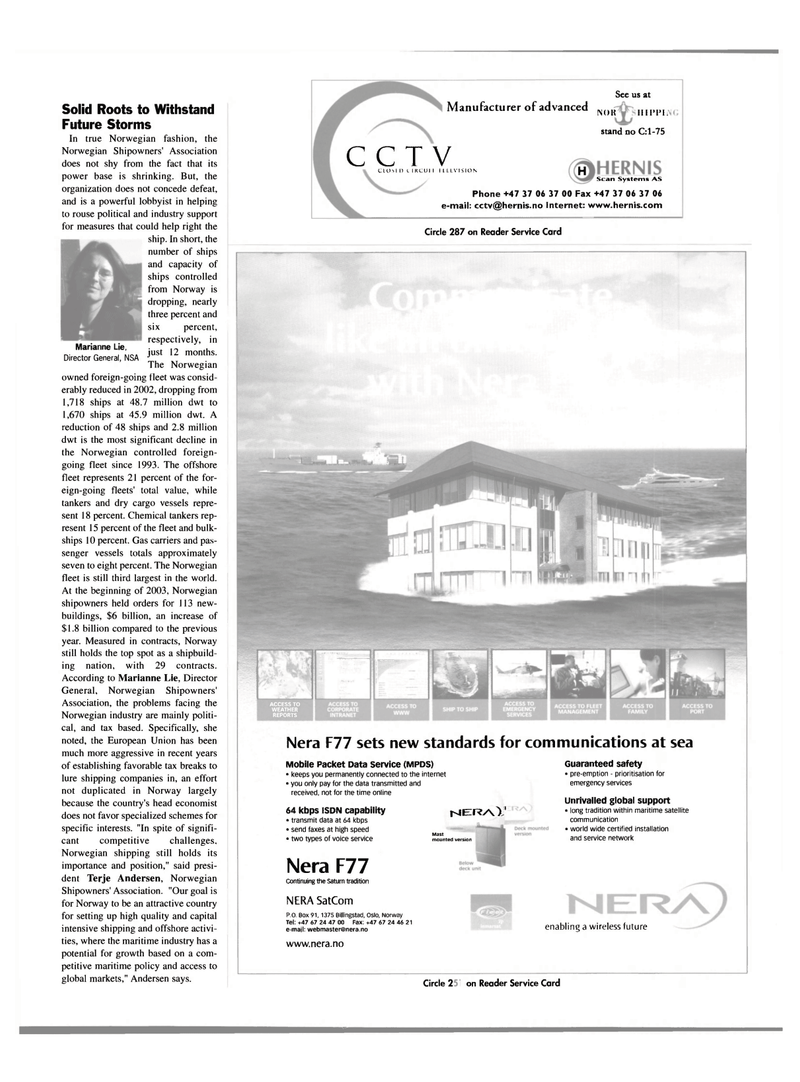 In true Norwegian fashion, the

Norwegian Shipowners' Association does not shy from the fact that its power base is shrinking. But, the organization does not concede defeat, and is a powerful lobbyist in helping to rouse political and industry support for measures that could help right the ship. In short, the number of ships and capacity of ships controlled from Norway is dropping, nearly three percent and six percent, respectively, in just 12 months.

The Norwegian owned foreign-going fleet was consid- erably reduced in 2002, dropping from 1,718 ships at 48.7 million dwt to 1,670 ships at 45.9 million dwt. A reduction of 48 ships and 2.8 million dwt is the most significant decline in the Norwegian controlled foreign- going fleet since 1993. The offshore fleet represents 21 percent of the for- eign-going fleets' total value, while tankers and dry cargo vessels repre- sent 18 percent. Chemical tankers rep- resent 15 percent of the fleet and bulk- ships 10 percent. Gas carriers and pas- senger vessels totals approximately seven to eight percent. The Norwegian fleet is still third largest in the world.

At the beginning of 2003, Norwegian shipowners held orders for 113 new- buildings, $6 billion, an increase of $1.8 billion compared to the previous year. Measured in contracts, Norway still holds the top spot as a shipbuild- ing nation, with 29 contracts.

According to Marianne Lie, Director

Association, the problems facing the

Norwegian industry are mainly politi- cal, and tax based. Specifically, she noted, the European Union has been much more aggressive in recent years of establishing favorable tax breaks to lure shipping companies in, an effort not duplicated in Norway largely because the country's head economist does not favor specialized schemes for specific interests. "In spite of signifi- cant competitive challenges.

Shipowners' Association. "Our goal is for Norway to be an attractive country for setting up high quality and capital intensive shipping and offshore activi- ties, where the maritime industry has a potential for growth based on a com- petitive maritime policy and access to global markets," Andersen says.

Mobile Packet Data service (MPDS) • keeps you permanently connected to the internet • you only pay for the data transmitted and received, not for the time online 64 kbps ISDN capability • transmit data at 64 kbps • send faxes at high speed • two types of voice service