The Coast Guard acknowledged that it received complaints about what was perceived as duplicate reporting requirements from different government agencies.

It stated that it is workins with other agencies to integrate information and data requirements. Relief cannot come soon enough.

The 24-hour advance notice regarding offshore lightering is unchanged.

Customs Advance Notice Requirements The Bureau of Customs and Border Protection requires various reports relating to cargoes being carried to the United States. The most significant of these reporting requirements is the socalled "24-hour rule".

Customs Service promulgated a regulation requiring sea carriers to present a vessel cargo declaration at least 24 hours prior to loading cargo in a foreign (non- U.S.) port when the ship is bound for a U.S. port. The vessel cargo declaration must include both cargo scheduled for offloading in the United States and cargo scheduled for offloading in a non- U.S. port that will remain on board the vessel when it calls in the U.S. (referred to as "foreign cargo remaining on board" or FROB cargo).

Accurate and Complete Submittals The carrier is required to present an accurate and complete vessel cargo declaration.

A precise description of the cargo (or the Harmonized Tariff Schedule [HTS] numbers to the six-digit level) must be included in the declaration.

Generic descriptions, such as 'freight of all kinds' (FAK), 'general cargo', and 'said to contain' (STC) will no longer be accepted. Likewise, general characterizations, such as 'chemicals' or 'foodstuffs', are considered overbroad.

The carrier should not accept cargo from a shipper unless the description provided is consistent with the above requirements.

"No Load" Messages Customs will attempt to screen all advance vessel cargo declarations within 24 hours of receipt. If it perceives a security risk with regard to a particular container or other cargo, it will direct the carrier to not load that cargo. The cargo subject to the 'no load' order will then be examined by appropriate officials.

Customs will not send messages stating that any particular cargo is cleared for loading. Rather, the carrier may load any cargo reported in its advance vessel cargo declaration for which a 'no load' message was not received within 24 hours of submittal.

In the absence of new information.

Customs is unlikely to require special inspection of cargo included in an advance vessel cargo declaration when that cargo arrives in the United States.

Being a government agency though.

Customs will not provide any guarantees to this effect.

Results to date While the avowed purpose of the 24- hour rule is to allow Customs to identify suspect cargoes before they are loaded on ships bound for the United States, there is some indication that the rule has turned into another reporting exercise.

In the first full week of enforcement.

Customs reviewed more than 142,000 advance vessel cargo declarations. It issued 13 'no load' orders, all based on inadequate cargo descriptions. The agency is now focusing on the timeliness of submittal and expects to begin issuing penalties in the near future for ships that load cargoes less than 24 hours after submitting the advance vessel cargo declaration. It is hoped that, eventually, the system will start serving its true purpose.

Immigration Advance Notice Requirements The Immigration section of the Bureau of Customs and Border Protection (nee Immigration and Naturalization Service [INS]) does not currently require that the arrival manifest be submitted until the ship actually arrives in a U.S. port.

Primarily, it is looking for suspected terrorists and persons of that ilk.

Unfortunately, Immigration is also concerned about persons of certain nationalities and persons without U.S. visas. The nationalities currently on the Immigration 'watch list' are: Iran, Iraq, Libya, Syria, and the Sudan. In addition.

Immigration is concerned about males between the ages of 16 and 45 from Pakistan, Saudi Arabia, and Yemen. If the ship has a crewmember either without a current U.S. visa or falling into the nationality watch list, the Coast Guard will order the ship to remain offshore until an acceptable crew security plan has been submitted to Immigration. For the most part, for a crew security plan to be acceptable, the master must arrange for hiring a commercial guard service to keep these crewmembers on board during the time the ship is in U.S. waters.

APHIS Advance Notice Requirement The Animal and Plant Health Inspection Service (APHIS) requires the carrier to submit an advance notification of arrival for any ship entering the United States from a foreign country or arriving in the continental U.S. from Hawaii or an insular possession. The notice must reach the APHIS office for the arrival port at least 12 hours prior to the ship's estimated time of arrival. The notice must include, among other things, the exact dock or pier where the ship will be berthed and the names of all foreign and non-continental U.S. ports where any cargo, crew, or passengers destined for the U.S. boarded since the ship's most recent arrival in the U.S.

FDA Advance Notice Requirement In January, the U.S. Food and Drug Administration (FDA) issued a notice stating that it was drafting a regulation that would require prior notice be submitted regarding commercial food shipments to the United States. The purpose of the prior notice would be to allow the FDA to review the planned shipment for potential bioterrorism. One of the parties under consideration for the obligation to submit this prior notice to the FDA was the carrier. When the official proposal was published in February, the FDA elected to impose this new reporting requirement on the importer, except where the shipment is in bond. In that event, the reporting requirement is on the carrier. The rule has not yet been finalized and remains subject to change.

Summary Since the horrific events of September 11. 2001. much has been done to improve maritime security in the United States and worldwide. Enhancement of reporting requirements for ships, cargoes.

and persons coming to the United States is a significant aspect of that enhanced security. It is only to be hoped that the agencies receiving all this additional data have the ability to utilize it for the intended purpose and do not see this as just another opportunity to take enforcement action against an already pervasively regulated industry. 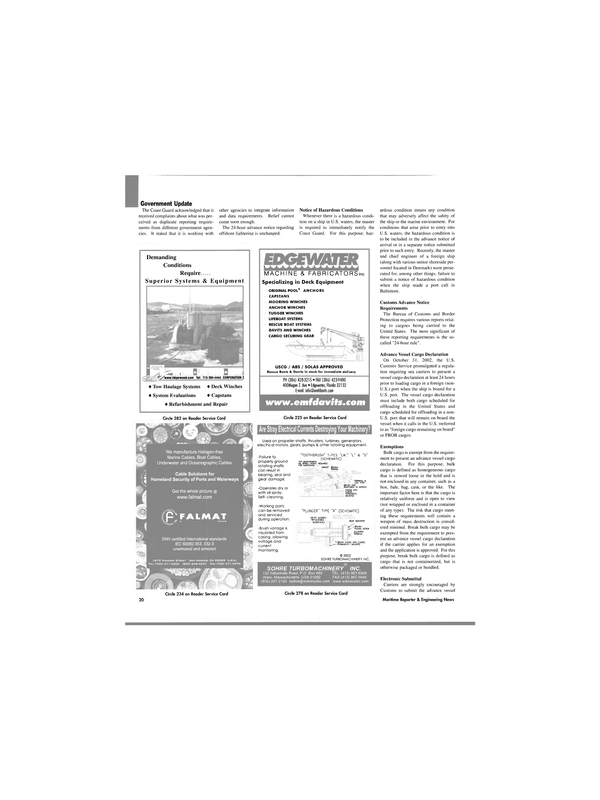 Other stories from April 2003 issue