The situation regarding its position changed dramatically on September 12; the vessel eventually running aground approximately 1 n.m. (1,852 km) north east of the lighthouse. The salvage tug Wolraad Woltemade arrived on the morning of September 11, and the Anchor Handler Pentow Service was on site to monitor the situation at close range. The oil pollution abatement vessel Kuswag I remain in the vicinity and the oil pollution patrol aircraft 'Kuswag VII' will overfly the scene this evening to assess the situation with respect to possible pollution. Jolly Rubino had approximately 1,100 tons of fuel oil and 225 tons of gasoil on board.

A salvage plan was formulated once the team boarded the vessel and a full inspection of the vessel had been completed.

SMIT Salvage was awarded a Lloyd's Open Form (with SCOPIC) by the vessel's owners.

On the morning of September 12, the SMIT Salvage team flew to the casualty in order to evaluate the situation. A member of the team was lowered above the Jolly Rubino from the helicopter but couldn't be landed due to the heavy rolling of the vessel. The temperature on deck was measured as 90 degrees and the situation on board was deemed life threatening — ongoing explosions still being experienced and smoke and flame emanating from below deck.

The Master, Officers and Crew of Jolly Rubino, abandoned ship late September 10 after failing to extinguish a fire in the engine room.

On September 13, the Kuswag VII oil pollution patrol aircraft over flew the Jolly Rubino, and reports that fingers/tendrils of oil are emanating from the grounded vessel; a light 10-m slick lying parallel to the coast approximately 100 m from the beach moving northwards.

In addition, salvage efforts were delayed when an increase in the swell height being experienced in the vicinity of the grounded Jolly Rubino prevented salvage personnel from connecting the oil transfer hoses to be used in the shipto- ship transfer operation. The SMIT Salvage team reported that swell height increased steadily and measured at 10- 11 ft.

At press time, it was expected that the current ground swell condition would continue for the next three days, delaying the beginning of the next phase of the fuel removal operation. 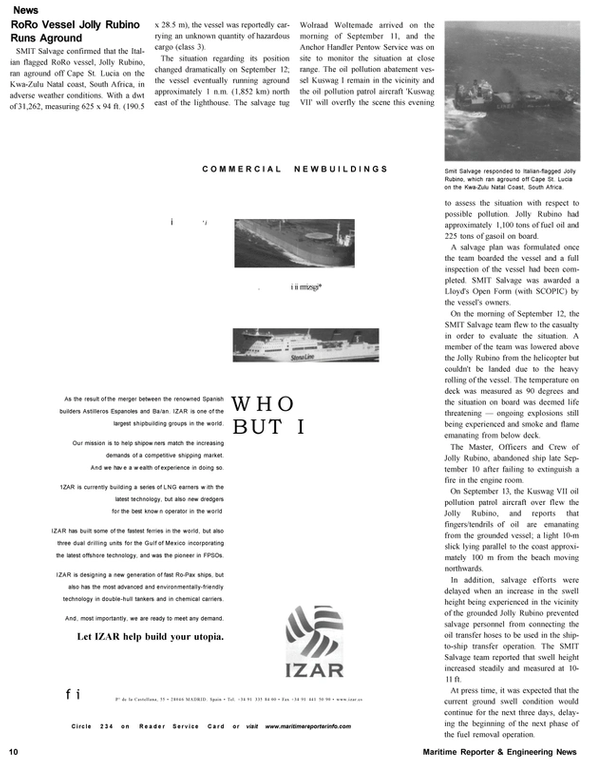