Fifth San Antonio Class Ship to be Named New York At a ceremony held on September 7, 2002, aboard the Intrepid Sea, Air and Space Museum in New York Harbor, Secretary of the Navy Gordon England announced his decision to name the fifth ship of the San Antonio class of Amphibious Transport Dock ships, "New York," to honor the state, the city and the victims of Sept. 11. The Secretary will be joined by New York Gov. George Pataki and many other leaders from the city and state of New York.

In doing so, Secretary England noted that longstanding relationship between the U.S. Navy and people of New York. "USS New York will project American power to the far corners of the earth and support the cause of freedom well into the 21st century," England said. "From the war for independence through the war on terrorism, which we wage today, the courage and heroism of the people of New York have been an inspiration.

Today, thousands of New Yorkers serve with America's Navy and Marine Corps at home and abroad protecting America's interest and promoting peace, security and stability around the world.

These dedicated young Americans are the strength of our military and our nation. USS New York will play an important role in our Navy's future and will be a fitting tribute to the people of The Empire State," England said.

Both Gov. Pataki and New York City Mayor Michael Bloomberg thanked the U.S. Navy for honoring all New Yorkers by naming this ship.

Governor Pataki noted, "USS New York will ensure that all New Yorkers and the world will never forget the evil attacks of September 11th, and the courage and compassion New Yorkers showed in response to terror." Four previous ships have been named New York. The first, a gondola (1776), was scuttled after suffering heavy damage during the defeat at the Battle of Valcour Island on Oct. 11, 1776.

Though a tactical defeat, the fierce resistance of the outnumbered Americans postponed a British invasion from Canada.

The second, a frigate (1800-1814), served to protect American commerce and project American naval power, particularly along the Barbary Coast of North Africa. The third USS New York, an armored cruiser (1893-1938), served as flagship of the North Atlantic Squadron during the Spanish- American War and, later, flagship of the Asiatic Fleet before being renamed Saratoga in 1911.

The fourth, a battleship (1914-1946), served in the North Sea blockade of Germany during WW I and provided shore bombardment during the invasions of North Africa, Iwo Jima, and Okinawa during WW II. One submarine was named New York City and served from 1979-1997.

The 684-ft. (208.4-m) amphibious transport dock ship will be built by Northrop Grumman Ship Systems in New Orleans and carry a Navy crew of 363 and 699 Marines.

The ship will be used to transport and land Marines, their equipment and supplies by embarked air cushions or conventional landing craft or amphibious vehicles, augmented by helicopters or vertical take off and landing aircraft in amphibious assault, special operations, or expeditionary warfare missions. 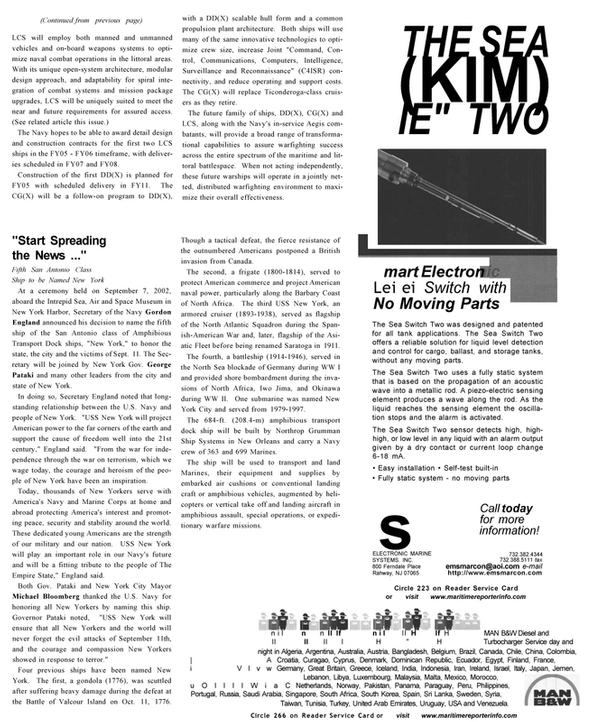