The eight newbuilds were completed at NASSCO from 1993 to 2002 under the Navy's 20-ship Strategic Sealift Program. All of the ships were named for U.S. Army Medal of Honor recipients.

The USNS Soderman was named for Private First Class William A. Soderman, a World War II recipient of the Medal of Honor for his heroic actions in Belgium in 1944.

The sealift new construction ships are large, medium-speed, RoRo ships (LMSRs). The ships are assigned to the U.S. Navy's Military Sealift Command, and are prepositioned to quickly deliver U.S. Army tanks, armored personnel carriers, tractor-trailers, and other equipment and supplies to potential areas of conflict around the world. The ships also can provide surge sealift support of remote military actions. Their multi-use capabilities make these cargo ships among the most flexible ever built.

The strategic sealift ships are the largest ships that can fit through the Panama Canal.

NASSCO is building two RoRos for Totem Ocean Trailer Express and has begun construction of the first of four double-hull tankers for BP. Vortmann added that NASSCO has also been awarded contracts to build the first three T-AKEs, a new, innovative class of dry cargo ammunition ships that will meet the Navy's logistics needs for the next 40 years. 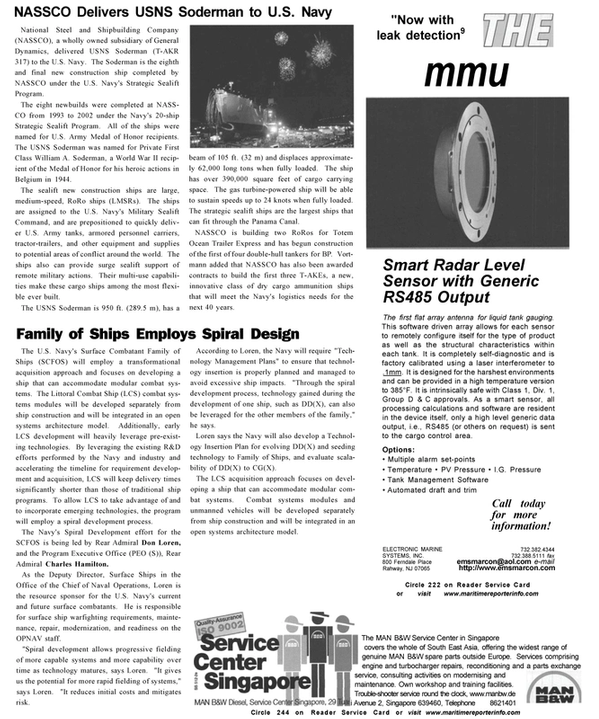