On July 2, 2002, a host of new regulations of concern to most ship builders and owners was implemented according to the recent revision of the International Convention for the Safety of Life at Sea (SOLAS). In conjunction with amendments to Fire Safety and AIS regulations.

The reworked SOLAS Chapter V includes new conventions on the use of Voyage Data Recorder's (VDR's), sometimes referred to as maritime black boxes. VDR's offer much the same in functionality as the black boxes found in commercial aircraft, and are specifically designed for after-incident information purposes, however some VDR's offer far more than simple data recording.

Kongsberg Maritime Ship Systems (KMSS) is behind one such VDR - the Maritime Black Box (MBB). Under- standing that the primary function of a VDR is data recording, KMSS has created a unit that supersedes the requirements of SOLAS and the IMO, but also offers a range of extra features of benefit to navigation, safety and training purposes.

KMSS, instead of rushing a product to market, instead decided to strategically develop a complete VDR package.

"We were willing to delay our entry into the market to ensure that we produced a product that we felt met the demanding requirements of the worlds ship owners," said Svein-Erik Larsen, vice president of Navigation Systems at KMSS.

Discounting the extra functionality for the moment though, the core responsibility of the MBB is to record and store data, for retrieval after an accident or incident. Should something go terribly wrong at sea, recovery of the VDR and more importantly its stored data is of upmost importance. The ability to withstand enormous stress is therefore paramount in the design. KMSS's MBB is fitted with a Protected Storage Unit (PSU 10), which houses a solid-state recorder similar to those used in the aircraft industry. The PSU has a capacity to store up to 12 hours of radar, sensor and audio data in the event of an incident at sea - information which is essential to accident investigators and ship owners in the aftermath of any accidents. Tested in extreme conditions, the PSU meets requirements specified in SOLAS V, IMO A.861 and the performance standard given by IEC 61996. Also, in the event that the unit becomes detached from the vessel, an Underwater Locator Beacon (ULB), is designed to enable the unit to be found quickly and easily.

The KMSS PSU specifications conform to the 1997IMO suggestions on VDR's, which also cover the operation of the MBB. They state that the VDR should continuously maintain sequential records of pre-selected ship systems data relating to the status and output of the ship's equipment, and command and control of the ship. The VDR should also be entirely automatic in operation and be subject to annual performance tests. The heart of the KMSS MBB is the DCU 10 Data Collection Unit and meets the IMO's standards with ease. As the central unit, the DCU controls the main functions of the entire MBB set-up and is the point that all sensor nodes are connected to. It requires a continuos power supply and countless interfaces, all of which are housed in the DCU 10 cabinet, which also comes prepared for AIS and ECDIS installation.

Eighty percent of all accidents at sea are caused by human error. Be it watchmen not handling a situation using the correct procedures, or crew with inadequate training, four out of five accidents are caused by humans, and not technology. The maritime industry relies on continuous training of crew, and the valuable data taken from the KMSS MBB can be used for these purposes. The KMSS Replay and Evaluation Unit (REU 10) fulfills this function for the KMSS MBB. Using data downloaded from the PSU and DCU, the REU serves as an efficient tool for evaluation of ship operations.

Crew and ship's personnel can learn from both their own and other people's experience using the REU, making it a valuable training tool. The fact that the data collected by the PSU and parallel DCU is used to it's maximum potential, is part of the reason that the KMSS MBB has is already proving so successful with the worlds ship owners and ship builders. Borje Jansson of Viking Lines said, "The MBB from KMSS was well worth the wait. I knew that they would develop the best solution. The cost of fitting on older ships is the main concern, but there are solutions available to ship owners.

KMSS understands the maritime environment, and has designed its MBB with ease of fitting and implementation in mind. The modular design allows the MBB to be installed on almost any vessel using the minimum of space. 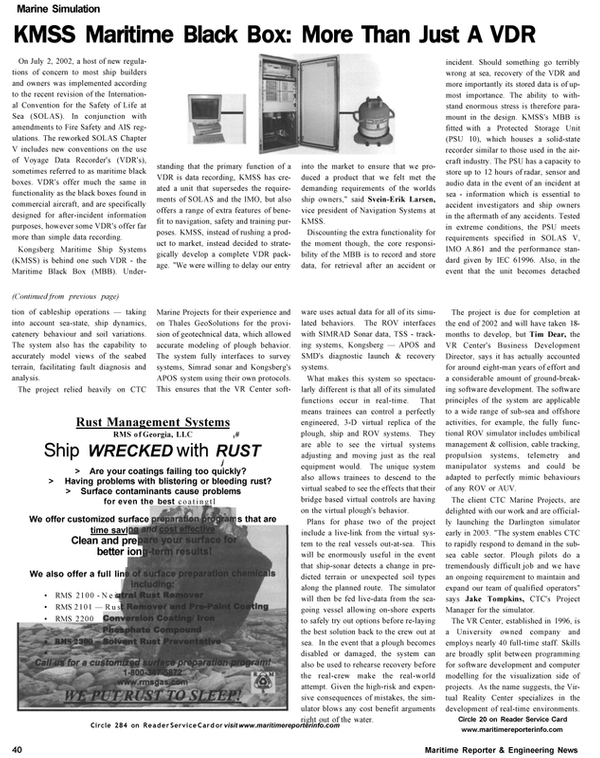