UMC Goes Beneath The Surface

Underwater Maintenance Specialists (UMC) has carried out another hull plate insert repair via its Dubai Team on VLCC at Fujairah Anchorage. In what is quickly becoming routine, UMC's Fujairah team took to the VLCC to fix its flat bottom plating. The area in question was experiencing internal corrosion, which led to a hole to form. Following initial inspection and conference with the vessel's owners and attending classification society surveyor, it was decided that the defective plating would be removed and replaced with new 31 mm thickness material. The affected area, of which was an internal frame, had to be cut back accordingly - a new 500 x 400 mm insert was then subjected to non-destructive testing - and repair was considered permanent. In addition, the exterior of the plate, was covered (as is standard practice at UMC), with an underwater coating to offer protection against corrosion.

Returning to the yard again is the U.K.

Royal Fleet Auxiliary, which has once again awarded the routine underwater propeller polishing of flotillas propellers, to UMC. The company, which has performed this type of the work for more than three years, will carry out some of the work from its offices located in the UAE.

UMC has also developed procedures and equipment for the in water replacement of stabilizers on a variety of vessels of different sizes. In these instances, not only were the stabilizers replaced, but the main and inboard bearings have also been renewed before the replacement stabilizer has been installed. 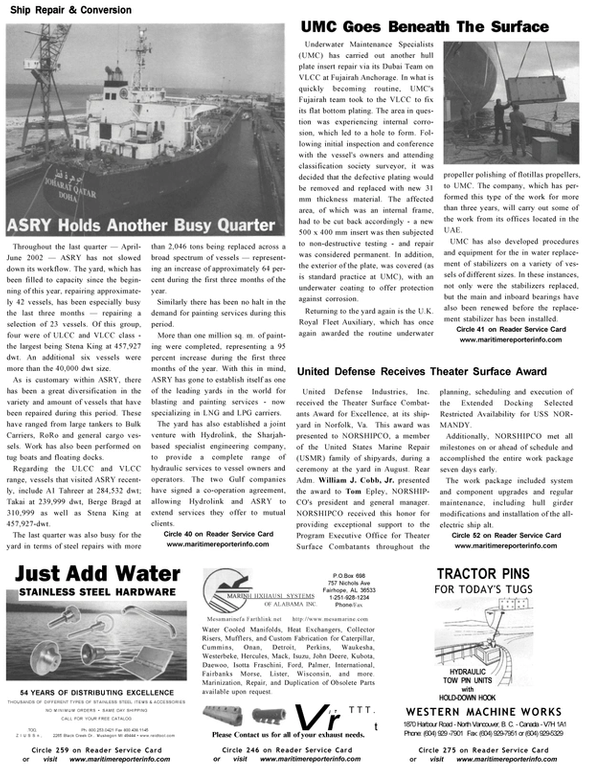 Read UMC Goes Beneath The Surface in Pdf, Flash or Html5 edition of October 2002 Maritime Reporter