Gladding-Hearn Shipbuilding, Duclos Corporation, has delivered two new fast ferries to the Government of Bermuda, Ministry of Transport. The first vessel was delivered in March; a sister ship arrived in Bermuda in June.

The ferries provide commuter and excursion service between Bermuda's capital, Hamilton, and the neighboring towns of Southampton and Dockyard.

The Somerset-Mass., shipyard was chosen from among 12 yards from four countries, Australia; Norway; Denmark and the U.S., that competed for the project.

The two ferries are powered by twin Detroit Diesel 12 V-2000 engines, each delivering 965 Bhp (720 BkW) at 2100 rpm. They drive 5-bladed Ni-Br-Al (nickelbronze- aluminum) propellers via Twin Disc 2.5:1 reverse/reductions gears. When fully loaded the vessels reach a top speed of 25 knots. The main cabin of each vessel seats 110 passengers, while another 98 passengers can seat on the partially-covered upper deck. Passengers board and depart the vessels through doorsport and starboard at midship and at the bow. Interior accommodations include upholstered seating, a concession, two heads, and a 150,00 Btu air conditioning system. 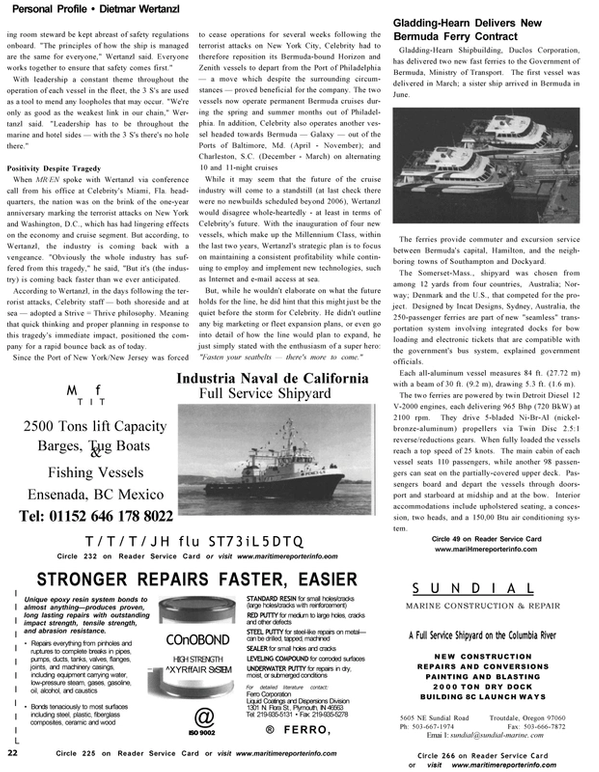