Two recent European initiatives, both involving power systems supplier Wartsila Corporation, have given fresh impetus to the development and application of fuel cell technology aboard ship. The Finnish organization has entered into a pact with Danish firm Haldor Topsoe aimed at bringing cost-competitive fuel cell powering solutions to the market. It has also thrown its weight behind a major new, industry-wide European research program focusing on the technology for commercial shipping.

Increased European efforts to make the concept a cost-acceptable reality in waterborne transportation follow an early take-up in the naval field. A 250 kW Siemens fuel cell of the proton exchange membrane (PEM)-type is being installed as part of a hybrid power and propulsion configuration adopted for a German-designed series of newbuild submarines.

In the U.S., the federal government has this year given a fillip to the concept of fuel cell power in commercial marine applications, through its award of a $100,000 grant to the San Francisco Bay Water Transit Authority towards the development of a zero-emissions commuter ferry. The WTA is putting $25,000 from its own resources into the exercise, entailing the design, cost estimates and final drawings for a fuel cell-equipped ferry.

The new agreement between Wartsila and Haldor calls for the development of fuel cell products in the power range beyond 250-kW, for both the marine market and the distributed power generation sector. The claimed attributes of the technology are ultra-low emissions, and high levels of reliability and efficiency, although the collaborators acknowledge that this raft of benefits must be provided at acceptable cost if market penetration is to be achieved.

Haldor Topsoe has a long track record in the field of catalysts and energy conversion, and its work on fuel cells has concentrated within the past five years on solid oxide fuel cell (SOFC) technology.

One element of its research and development activities has been a 10- year involvement in the Danish SOFC fuel cell program led by the Danish National Laboratory at Riso.

Readers of MR/EN may recall the firm's contribution to the seminal project involving the fitting of selective catalytic reduction (SCR) plant to the twostroke MAN B&W engines in a series of 38,000-dwt bulk carriers delivered between 1989 and 1991 for transpacific trade into the San Francisco Bay area.

In addition to the cooperation with Haldor Topsoe, Wartsila is a participant in a new, European Union-aided pilot study to define the basis for the development of fuel cell systems for merchant ships. Implemented in June this year under the project name FC-Ship, the initiative has been prompted by the perceived environmental benefits of fuel cell technology, as regards both exhaust emissions and noise. EU funding is expected to account for more than 50-percent of the budgeted costs of the 24-month program.

Drawing in 21 companies and institutions from EU countries and Norway, and coordinated from Oslo by the Norwegian Shipowners' Association, FCShip's initial objective is to identify and define demand for fuel cell systems in both propulsion and auxiliary applications, evaluate safety and operational needs, and assess the economic and environmental potential for waterborne transportation. Conceptual designs of fuel cell-powered vessel, including a passenger ship, are to be prepared, and project teams will undertake case studies and examine infrastructural requirements.

If the prospects are regarded as worthwhile, FC-Ship will provide a framework for follow-on research and development to help nurture the uptake of the technology by commercial marine users. 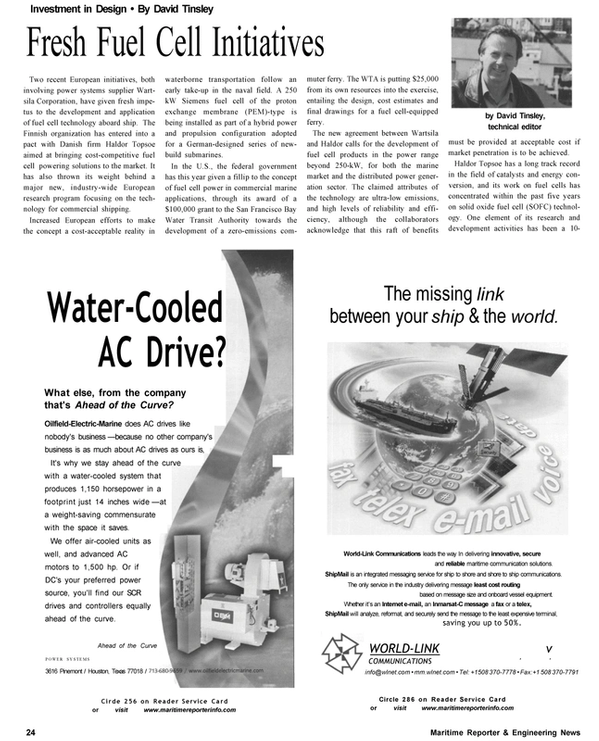