Last month MR hopped aboard Costa Fortuna, currently under construction at Fincantieri's Sestri Ponente yard in Genoa. The 105,000-gt ship will be the largest cruise ship to ever fly the Italian flag, and the largest — in 30 years — to be built by the historic yards in Sestri Ponente after the Michelangelo, built in 1965.

In a post-tour press conference, Arison defended his company's cornering on the cruise ship market, which may soon include the addition of Princess Cruise lines, pending governmental and shareholder approvals.

"When we acquired Costa and Cunard, neither had any ships under construction," said Arison. Now, they have three ships and two ships, respectively, under construction now. Concurring, Antonini noted that pre-Carnival, Costa Crociere built their ships in Germany.

In addition to Fortuna, Costa has sistership Costa Magica under construction with Fincantieri, scheduled to enter service at the end of 2004, and Costa Mediterranea, an 86,000 ton, 2,680 passenger vessel under construction at Finland's Kvaerner Masa Yards.

Costa Crociere, an Italian member of the Carnival Corporation Group, currently has a fleet of eight ships totaling 414,000 gt with a capacity of 10,800 guests. 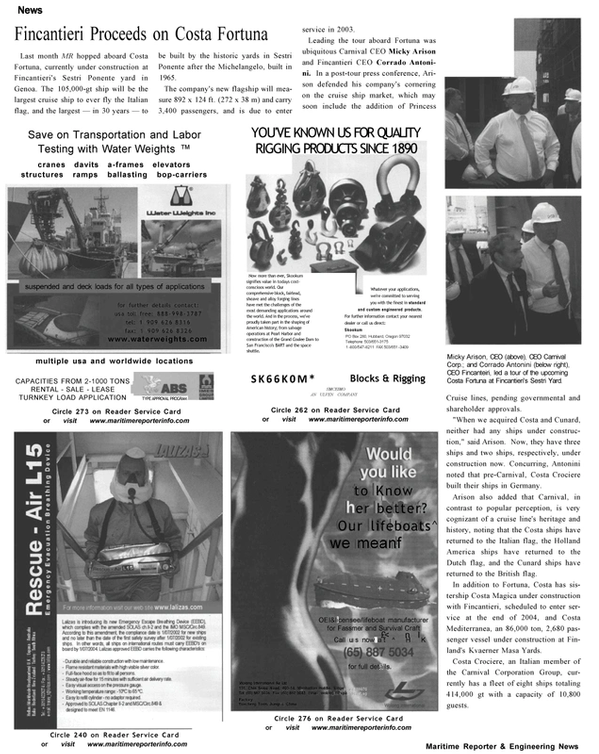