Planned for availability early in 2004, the MT30 has a power rating of 36 MW, but is said to be comparable in efficiency to 25 MW units. A rating of 36 MW is available at the power turbine output shaft at ambient air temperatures up to 26 degrees C, with a corresponding specific fuel consumption of 0.207 kg/kWh. The unit burns DMA, a widely available marine fuel. Under tropical conditions of 32 degrees C air temperature, the output is 30 MW.

An eight-stage variable geometry axial low pressure compressor driven by a single stage IP turbine feeds air to the high pressure spool, comprising a fourstage compressor and single stage HP turbine. The MT30 will be supplied as a package on an optional bedplate with an acoustic enclosure, which is fitted with automatic fire detection and extinguishing, and houses the auxiliaries and the inlet and exhaust diffuser. The complete unit weighs about 22 tons dry, or 27 tons with bedplate, and measures 30 x 12 x 13 ft. (9.1 x 3 . 8 x 4 m).

The engine — which will target both commercial and military markets — has 80 percent commonality with the Trent 800 aero engine, which, since entering service in 1996, has logged more than two million flying hours and achieved 99.9 percent reliability. The MT30 is the 11th engine type Rolls-Royce has derived from core aero engine technology- Circle 199 on Reader Service Card www.maritimereporterinfo.com 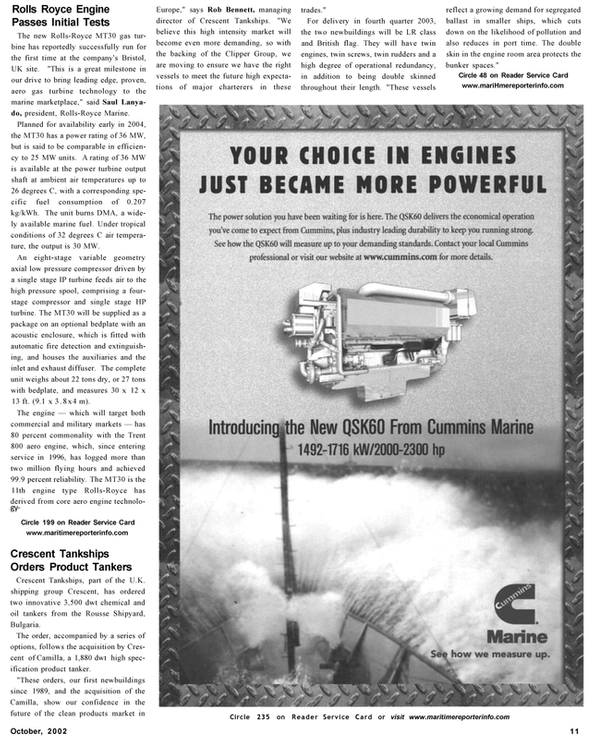