Standards for A New Era

One of the most respected names in the development of vessel designs suited to volume demand and series production, and still widely identified with the 'Liberty' ship replacement era, GTR Campbell Marine Consultants has fostered new links with the industry in China. The recent opening of new headquarters for the Canadian firm and its associated company Algoship Designers in Nassau, Bahamas, was accompanied by a first deal for the latest addition to its standard ship portfolio, a 700-dwt interisland ferry.

While the bulk carrier bloodline is perpetuated in a host of new projects involving Chinese and South Korean yards, the extension of the GTR Campbell concept to the ferry domain involves a combined passenger and cargo carrier dubbed the Fiesta type.

Ordered by FastMail Shipping Company from Xinhe Shipyard, and incorporating accommodation for 100 passengers, she will be placed into service between Florida and the Bahamas.

The ferry initiative complements the GTR Campbell imprint on bulker newbuild schemes currently under way at four other Chinese yards, and totaling 20 ships. The extent and scale of activity is a measure of the continuing influence of a design house that made such an important contribution to the Japanese shipbuilding industry's earlier rise to international prominence.

GTR Campbell International had been formed in Halifax, Canada, in the late 1940s by Scottish naval architect George Campbell, who moved the company to Japan in 1950. After a period of reduced involvement in shipbuilding, the firm returned to the standard ship sector in 1994 under its present name, headed by Antony Prince. The re-emergence was heralded by the introduction of the 29,500-dwt Fantasy design, reflecting close reading of the market's needs on the part of Prince, who has been with the organization for 29 years. He had been the 'right-hand man' to the late George Campbell.

Currently, a new breed of GTR Campbell- developed wide-hatch bulker, the Festiva, is being turned out at Jingjiang Shipyard for Dockendale Shipping and the Clipper Group. Delivery of the first pair of 27,000 dwt newbuilds in a sixship series was imminent at press time.

The company is also constructing the 52,000-dwt, double-skin Galaxy Handymax bulker type, a four-ship program at the Jingjiang yard to the account of Clipper and Dockendale. 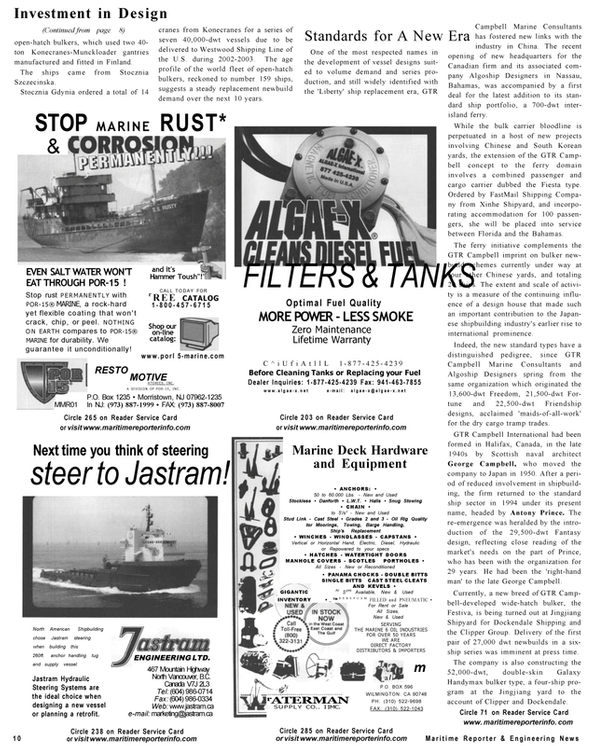 Read Standards for A New Era in Pdf, Flash or Html5 edition of September 2001 Maritime Reporter