The first open hatch vessel (12,000 dwt) with gantry cranes was delivered to Oestberg's Rederi, in Norway, December 1962. This revolutionary vessel and crane design was a result of cooperation between Oestberg, Crown Zellerbach Co. and the Munck Group in Bergen.

Crown Zellerbach Co. was one of the leading pulp and paper companies, located in San Francisco. Its shipping department was headed by Clyde Jacobs, who was a driving force in making the Open Hatch design the new standard for paper and pulp transportation at sea. At that time the vessels were primarily based on the traditional "Shelter Deck" design and the loading and unloading was done with complicated "boom and winch" arrangements. The Open Hatch Bulk Carrier, or OHBC, as the vessels are commonly referred to, are unique in its design in many respects. With its large and square holds, they are designed to carry unitized cargo, and to offer high efficiency with respect to capacity utilization. Paper and Pulp is typically referred to as "Unitized Cargo," which means that most cargo units have uniform dimensions and weight. To utilize maximum capacity, the cargo must be stowed up alongside the hold sides, which again necessitates square holds. Unlike conventional bulk carriers, which have small hatches for entry of electro-hydraulic grabs, the hatches on OHBC vessels cover the entire beam of the ship. This is necessary for stowing, loading and unloading alongside the vertical walls of the holds.

As a result, the hatches are therefore designed to be a structural part of the ship. The Munckloader Gantry Crane was the first to utilize hydraulic jacks on the crane legs for the task of lifting the hatches, and using the gantry motion to the horizontally move and position the hatches.

Munckloader developed a new generation of gantry cranes in 1993. The new design enclosed most of the electrical and mechanical components inside the main construction, helping to make the outside surface as smooth as possible.

This was done to protect components and reduce maintenance and spare part needs.

Operational and rigging speeds were significantly increased, and it was the first gantry crane to utilize frequency controlled AC motors.

KCI Konecranes is a leading engineering group specializing in advanced overhead lifting solutions and maintenance services. The last fiscal year ended — 2000 — was a particularly prosperous one for the company, as operating income grew 23 percent, net sales grew 19 percent, and order intake grew 42 percent, according to Stig Gustavson, president and CEO. The crane industry, by his estimation, is still a fragmented one, and an industry in need of continued consolidation. KCI Konecranes has been a lead proponent of this consolidation, acquiring 10 companies in 2000.

According to Gustavson, the company has the resources and desire to continue this trend. 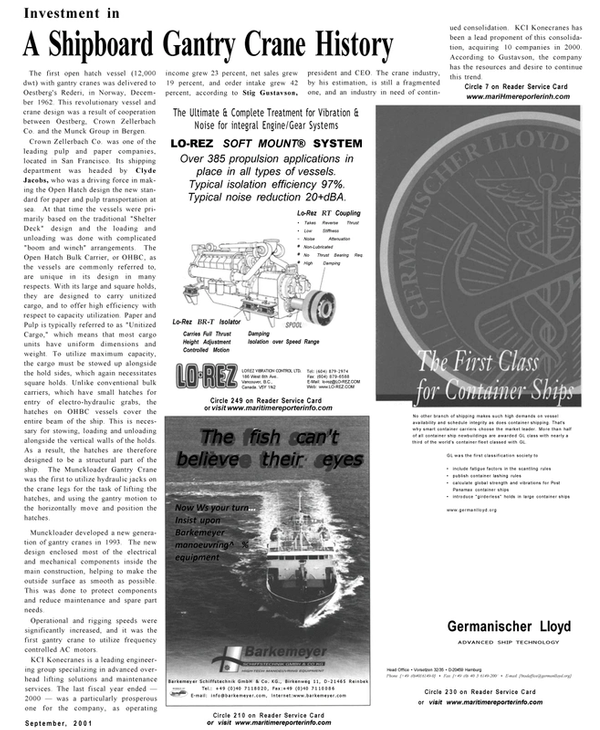