The new products are geared to streamline the burgeoning Rolls- Royce stable of technologically advanced marine propulsion products, as previously various companies which are now part of the Rolls-Royce group competed against each other with thruster ranges which many times overlapped. The streamlining was expected given the company's aggressive acquisition of companies in the past few years, and take full advantage of the deep R&D resources the company offers in its quest to dominate the marine propulsion market.

Tunnel Thrusters The new TT series Kamewa Ulstein tunnel thrusters are available in 11 sizes, covering the power range from 200 to 3,700 kW, and available in CP and FP propeller versions. All models are available with different hydrostatic heads to cater for either deep or shallow draft vessels, and the manufacturing approach allows the company to be competitive on the specialized spec as well as the off-the-shelf markets.

Azimuth Thrusters Similar design principles have been used in the new Ulstein Aquamaster azimuth thrusters, a line which includes nine frame sizes and covers the power range from 330 to 5,500 kW, with the option for either CP or FP propellers. The options in this range are large to accommodate a number of design applications, including units, which retract into the hull, are underwater mountable and containerized types, deck mounted units and pulling thrustrers. 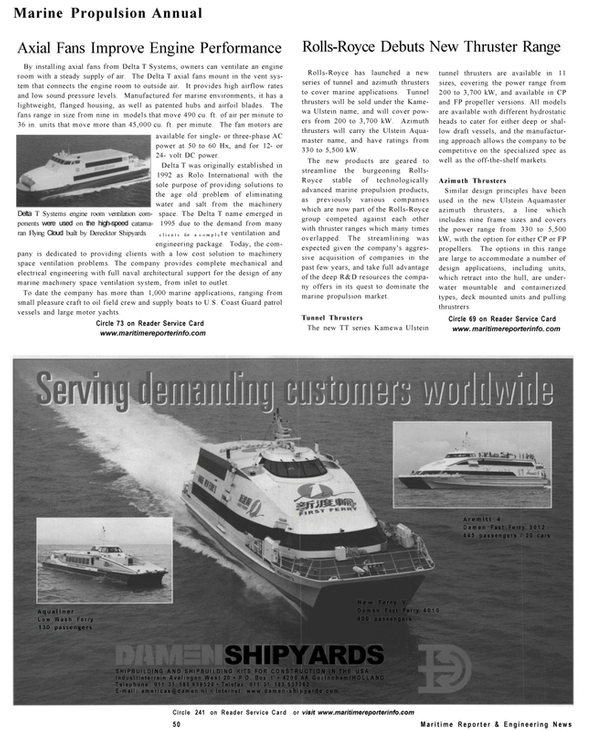